According to Federal tax documents these Corporations and “black box” foundations are massively funding the astroturf Fight For The Future.   These are the folks attempting to organize a counter-protest at the Copyright Office roundtables today in San Francisco.

What the f— is the Sixteen Thirty Fund?  According to it’s 501 (c)(3) it “promotes Environmental Quality, Protection and Beautification.”   Is Fight For the Future building nature trails on Cape Cod? Martha’s Vineyard?  I don’t know the IRS laws on non-profits but I’m pretty sure you can’t start a non-profit that claims to do one thing but does another.

Each initiative is uniquely structured and focused to achieve the goals of its funding partners, and led by experienced program staff. Our highly effective rapid response grantmaking function and ability to integrate support for lobbying activity are two key tools utilized by our collaborative grantmaking initiatives.

Translation:  We also do lobbying work for unspecified “funding partners”

I couldn’t find any way to contact them.  But I see that that one of the board members is this person: 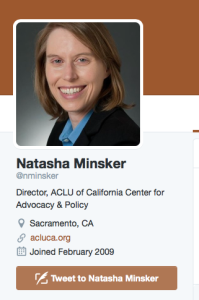 You’d think the Director,ACLU of California Center for Advocacy & Policy would feel a twinge of conscience over funding ($100K) an organization which  willfully violated the rights of the King estate.    Imagine if it were 1960 and some Dixiecrat decided to encourage thousands of people to use Dr King’s copyrighted works without permission or payment?  What would the ACLU of 1960 say about that?

Obviously Chicago Instructional Tech Foundation is based in Boulder Colorado.  And naturally it makes sense for them to give $105,000 to Fight For The Future, because of their well known “instructional tech” expertise.   It of course follows that donations to this foundation are not tax deductible.  And naturally they don’t disclose funding.  If you’re a glutton for punishment read their 990.  It’s a maze of related entities paying each other money.  If anyone has any idea what this “non-profit” is doing explain it to me.

Finally how did the Knight Foundation get mixed up with this Organization?  I want to know how the Knight Foundation which claims to support the arts can supports a groups that favors the ability of corporations like Google to use artists work without permission or compensation? Heads should roll.