The Scheißebin of History.  Pirate, Nazi memorabilia collector and self confessed Hitler fan Kim Dotcom graces the cover of Wired Magazine. (Ironically this is “hot linked” from Socialist Appeal article in which they seem to praise Dotcom and Pirate Bay as somehow socialist.)

Let’s just start at the Godwin conclusion.  There is no other way around it.

Why is it every time we dig a little deeper into the pro-piracy and torrenting movement we find key figures associated with “white nationalists,” Nazi memorabilia collectors, actual Nazis or other similar bigots?  And why on earth do politicians, journalists and academics sing the praises of these people?

Let’s start with the heir to the Swedish Wasabröd fortune Carl Lündstrom.  Lündstrom went to jail for being the money behind The Pirate Bay. Here he is on the Swedish “European heritage” oriented program Red Ice.  This is from the description of his interview on the Red Ice YouTube channel:

“In the members’ hour, we discuss the impact mass immigration has had on property and housing in Sweden. Carl argues that there would be less problems now had Swedes prevented their properties from being used to house migrants. We touch on the role of the media in the ongoing invasion of Europe, with Carl telling us that the pro-refugee propaganda was targeted at prospective immigrants to make Europe seem very appealing. We discuss how these supposed refugees bring with them the very conditions which they flee, and how this process spells the end of Sweden as a safe, high-trust society. The members’ hour also covers the motivations of the elite, terrorism, and the need for idealists to take action.”

Watch the show.  I wonder which “identity gang”  Carl will be aligning himself with in prison? Wonder who will play him in the Swedish reboot of Oz?

How does Kim Dotcom tie his shoes?

It has been widely reported that the MegaUpload founder owns a signed copy of Hitler’s Mein Kampf.  Less well known are Kiwi political blogger Cam Slater claims that Dotcom had a Nazi flag displayed in his basement and regularly engaged in Nazi chants:

One former staff member spoken to by WOBH (who wishes to remain anonymous due to ongoing threats from Dotcom) in our ongoing investigations of the REAL secret life of Kim Dotcom has told us that regularly, at dinner, Nazi salutes would be made and Nazi chants like “Heil Hitler”  and “Sieg Heil” were made, especially if the guests were mainly German.

Slater is controversial but many of his  reports on Dotcom have turned out to be accurate.  Certainly Dotcom’s claim that the Mein Kampf was simply an “investment” has been undermined by the surfacing of pictures of Dotcom wearing a SS Nazi helmet.

Next there is the Pirate Party’s lone European Parliament MP Julia Reda. I don’t really know what to make of her except to say that this German politician really should find something other than the Anne Frank Diary and the Anne Frank Foundation to use as an example of a work that should be freely available in the public domain. Think of all the copyrighted works out there for which she might reasonably argue a claim of public domain.  She decided to pick the Anne Frank diary.  Hmm.

Further as a member of EU Parliament perhaps she should refrain from actively pirating the book in collaboration with her twitter followers.  After all sales of the book are used by the Anne Frank Foundation to fight anti-semitism. It’s really quite a bad look for any MP, German or not. (Even if it is just the make-believe LARPing RPG EU Parliament.)

Or maybe that is the point? Defund the Anne Frank Foundation. Cause you know I read in the twittersphere that copyright producing media conglomerates are controlled by you-know-who.

Seriously though, she doesn’t seem to want to apologize or retract her comments even after it is clear she has hit a very wrong note.  Here she is a month later doubling down.

After apparently expanding eastward into Poland Reda couldn’t find a free copy of Anne Frank Diaries! She then complained very loudly on twitter! 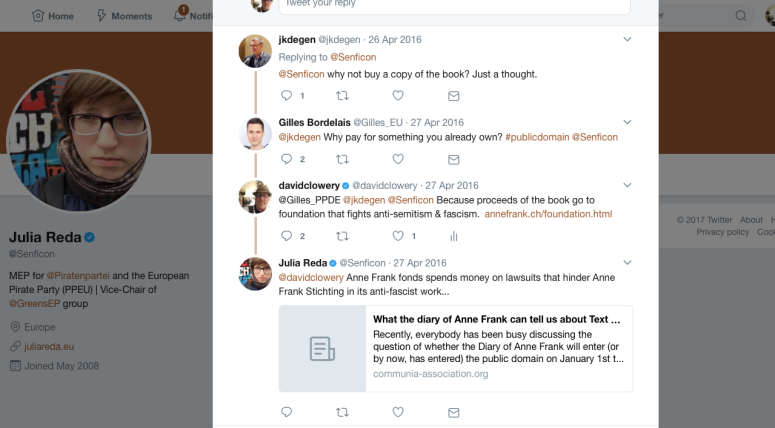 Reda clearly has her priorities in order, she can’t let fighting anti-semitism interfere with “stitching.” The internet might break or something. Imagine a world in which Etsy is devoid of unauthorized Anne Frank Diary themed embroidery.   The horror! …Oh wait what’s that? Stichting not stitching. (I really did make this mistake in earlier version of blog). Sorry my Dutch is rusty, ever since Kayak broke up and I stopped reading Dutch slave ship manifests, I haven’t had much use for it. Anne Frank Stichting as in the tourist attraction the Dutch government set up that whitewashes the role of the Dutch in the genocide?   This reference is even worse for Reda. Tone fucking deaf again. Basically the Dutch government set up the Stichting and then has proceeded to claim ownership or jurisdiction over the Anne Frank Diary against the wishes of the Anne Frank Foundation which was established by Anne Frank’s family.   The Dutch government is objectively trying to dispossess Anne Frank of something once again. Besides if you were the Anne Frank foundation, would you want a Dutch government run by Geert Wilders performing “scientific research” on the Anne Frank diaries? What sort of further whitewashing do the Dutch require? But I digress.

In the exchange above Canadian author John Degen wryly asks Reda why she doesn’t just buy a copy?  Degen’s point is the ebook is available for sale virtually worldwide. Reda is apparently unwilling to pay for a copy.  Instead Reda engages in pure demagoguery in an attempt to vilify The Anne Frank Foundation. Remember this is a member of the EU parliament.  Talk about weiße people problems (all entendres intended)!

(Also perhaps someone familiar with the ethics rules of the EU parliament can tell me why is a member of EU parliament still sitting when she is clearly trying to incite mass copyright infringement against the Anne Frank Foundation?  In the US mass copyright infringement is a RICO predicate. I mean I know the EU parliament is just make-believe-play-acting LARPing game but this has to be against the rules. Who has a rulebook?  I sold mine with my Warhammer 40k kit).

Reda’s non-apology makes me wonder if she is not in fact incredibly tone deaf but instead “dog whistling” to her pirate and far right constituency. Because I’ve heard in the twittersphere that you-know-who controls the copyright producing media conglomerates.  Maybe she has heard the same thing?  Indeed look at the comments of many who follow her.

Perhaps Reda observing the dwindling fortunes of the Pirate party has decided she needs to appeal to German white nationalist voters for re-election?  I write this bit of stupidity only because it is slightly more plausible than a German EU MP choosing the Anne Frank Diaries as the target of a mass copyright infringement campaign. I mean if you wrote that into a tele novella script the producer would force you to remove it as completely implausible!

But let’s not lay all the blame on the German.

Who is the clean cut looking  Gilles Bordelais?  He describes himself as a Reda “minion” (EU parliament employee?).  He appears to be carrying on a 77 year tradition of Belgians collaborating with Germans to dispossess certain people of their rights in The Low Countries.  He claims that “we” (Europeans) already own the Frank diary.  While its possible, does anyone know how it is that Frank died at such a young age and failed to produce any heirs? Thus making the ownership of her copyrights a bit cloudy?  Bicycle accident perhaps? I seem to recall it was during an earlier period of European law “harmonization” there was some dispossession of Jewish properties and bicycles in The Low Countries.

But let us not forget that even the US has it’s own stupid bigots committing macro-agressions disguised as progressive politics.  Look no farther than the Fight For The Future.  We have covered Fight For the Future extensively and their copyright infringement campaign against the MLK estate. Read more here and here.

Illustration of the economic value of racial diversity to an organization.  If Fight For The Future had a single African American board member or employee they might have realized this was a very bad idea and not been forced to erase the entire episode from their website AND the Internet Archive Wayback Machine.

Fight for the Future  is simply an astroturf group run by a former Google lobbyist.  FFTF employed exactly the same tactics against the MLK Estate that Reda used against the Anne Frank Foundation.  Specifically they manufactured fake outrage by purposely misleading people into thinking that the I Have a Dream speech was unavailable to the public when in fact you could instantly purchase it for $2.99 from the iTunes store. There was no need to illegally share it. How the fuck does even an astroturf organization that claims to be progressive end up organizing mass copyright infringement campaign against the estate of THE American civil rights icon?  Does anyone have a fucking clue over there?

Or better yet how big does the shill paycheck (New America Foundation = Google) have to be for a magazine like Slate to cover this as a really good progressive idea, when in actuality it’s a horrible regressive macro-aggression? Vice media did the same thing. So did Boing Boing. So did Mashable. The last two further helped by publishing the infringing links and encouraged people to join in the “sharing.” Sure it isn’t like any of these journalists went out and started a white nationalist party but its pretty fucking stupid that they didn’t seem to realize that they were taking money from The MLK estate and instead giving it to Google/Eric Schmidt by driving traffic to YouTube.

What a Scheiße show.