As a result of the passage of the 2018 Music Modernization act the federally designated Music Licensing Collective (MLC) will take over licensing, collecting and paying mechanical royalties from streaming services to songwriters January 2021.  Previously these duties and services were performed by a variety private companies.  One of the goals of the MMA was to streamline the process so that songwriters would benefit from increased efficiency and lower overhead. Incredibly the MLC appears to be establishing a system that will be less accurate and less efficient than the bad old system.  Essentially it is an additional $60 million dollar layer of bureaucracy sitting atop the old system with many of the old players now hired as “vendors.”

But it gets worse…

It has now become apparent that the MLC plan for building a global database of songs and songwriter/publisher splits is this:

How bad is the data?  I can only go by my catalog but nearly every song I co-wrote with another writer does not have the proper writer splits.  This despite the fact the I am an affiliated HFA writer/publisher and I gave them the splits when I signed up.  Look below.  My co-writers shares are listed as  “copyright control.”  What does that even mean? Where does that money go? 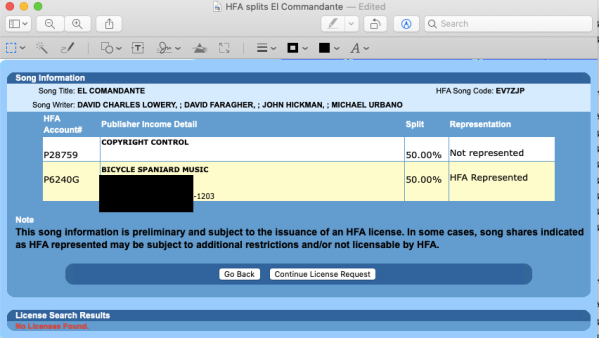 I think a fair reading of this is “MLC forces songwriters to fix bad data they are buying from HFA.”  So if songwriters are fixing the data, and the MLC is buying data from HFA, what exactly do all those highly paid music executives at the MLC do for the $60 Million?  Asteroid mining?