Remember all the controversy over YouTube’s ad-free streaming subscriber service, MusicKey? If the words “Google” and “Ad-Free” sound like a complete contradiction, you are not alone. 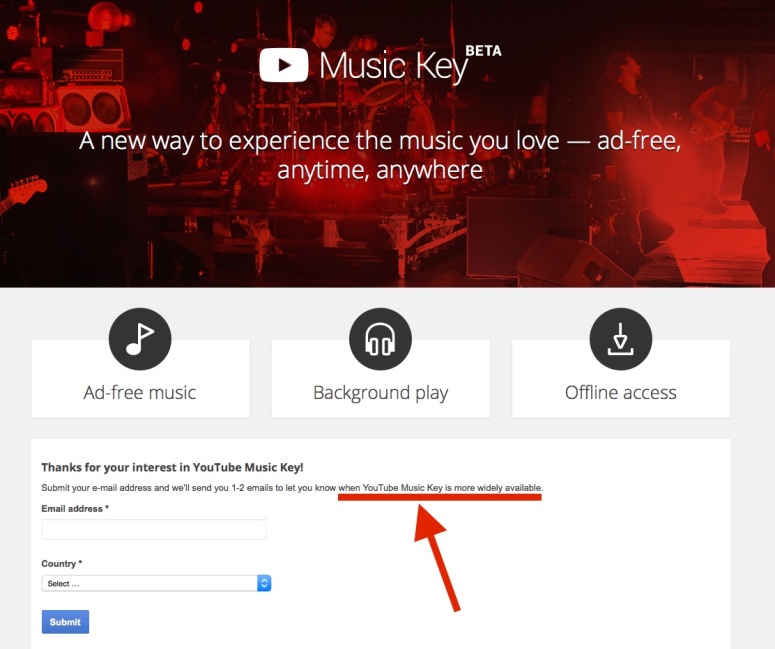 Ok, so where is it? We tried to sign up, but we’ll be notified later when the service is available.

Remember how one of the requirements was ALL OF YOUR MUSIC also had to be licensed for FREE STREAMING on YouTube or your promotional videos would be blocked or banned from the site?

Did you forget? No worries, here is the recap from Zoe Keating’s blog that brought the issue to light.

1) All of my catalog must be included in both the free and premium music service. Even if I don’t deliver all my music, because I’m a music partner, anything that a 3rd party uploads with my info in the description will be automatically included in the music service too.

2) All songs will be set to “montetize”, meaning there will be ads on them.

3) I will be required to release new music on Youtube at the same time I release it anywhere else. So no more releasing to my core fans first on Bandcamp and then on iTunes.

4) All my catalog must be uploaded at high resolution, according to Google’s standard which is currently 320 kbps.

5) The contract lasts for 5 years.

So, “All songs will be set to “montetize”, meaning there will be ads on them.” That’s one hell of a trade-off to get some subscription money, but maybe it won’t be so bad once that MusicKey money starts rolling in right? YouTube and Google have a HUGE amount of users to convert to PAYING SUBSCRIBERS, right?

Hahahahahahahahahaa. You fell for that gag? Seriously? Here’s what YouTube says about that little side business of PAID SUBSCRIBERS…in an interview between YouTube Senior Exec Robert Kyncl and Music Ally: YouTube Music Key delay ‘nothing too serious’ says senior exec.”

“We’ll always have ad-supported: that’s our core, and we’ll never stop focusing on it.  It’s in Google’s DNA to be in the ad-supported business.

Subscription is just an add-on. It’s an adjacent business that we’re building.”

Suckas… You seriously thought Google who has slathered the internet with advertising on “User Pirated Content” across multiple platforms was going to pivot to a paid subscription model to move away from advertising on it’s flagship video streaming site? Really? Seriously?

You saw that five year term, right? So MusicKey is a no show for subscriber revenue but thanks to that five year term the largest streaming service in the world, that pays the least amount per stream now has licenses for the next half decade. As the kids say, LOL.

Don’t worry about MusicKey not showing up anytime soon with that Paid Subscriber Money, in the meantime enjoy your life’s work as a YouTube auto-generated music video and playlist, for free.

Oh MusicKey we would have loved to have known you – now all we have is our catalogs of master recordings being monetized on old-school YouTube for pennies on the dollar of every other streaming service including Spotify. Wow, just wow.

And Speaking of Spotify, guess who has a seat on the board to make sure that their “ad-supported DNA” remains the primary focus of that music streaming service? Three guesses… Yup, it’s Google.

January 2015 : YouTube Is Removing Any Artist That Refuses to License Its Subscription Service…| Ars Technica

April 2015 : If You Don’t Agree to YouTube’s New Ad-Free Terms, Your Videos Will Disappear…|Digital Music News

Exhausting… Why would anyone trust these people? All hail “User Pirated Content“… and if that doesn’t work just come up with a non-existent paid subscriber streaming service that auto-generates music videos and playlists on the free, ad-supported platform. At least that part is working, right?

Let’s talk about transparency for a second. Why is it that YouTube would be excluded from Google’s own DMCA tracking report? It couldn’t be because DMCA notices and takedowns of infringing material YouTube dwarf even the most notorious of pirates sites say like The Pirate Bay? No, that wouldn’t be the reason would it? 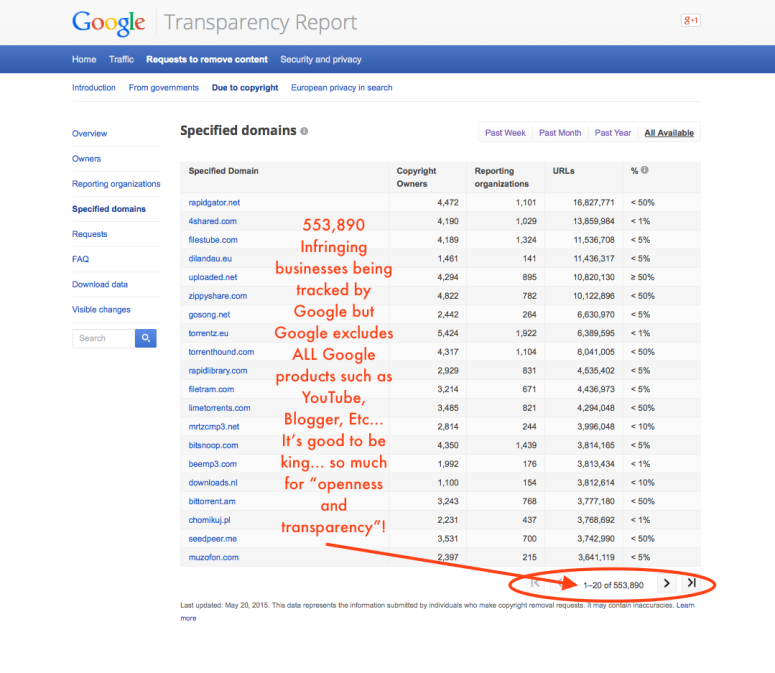 Maybe #adbusters and #blackspot really do have it right…