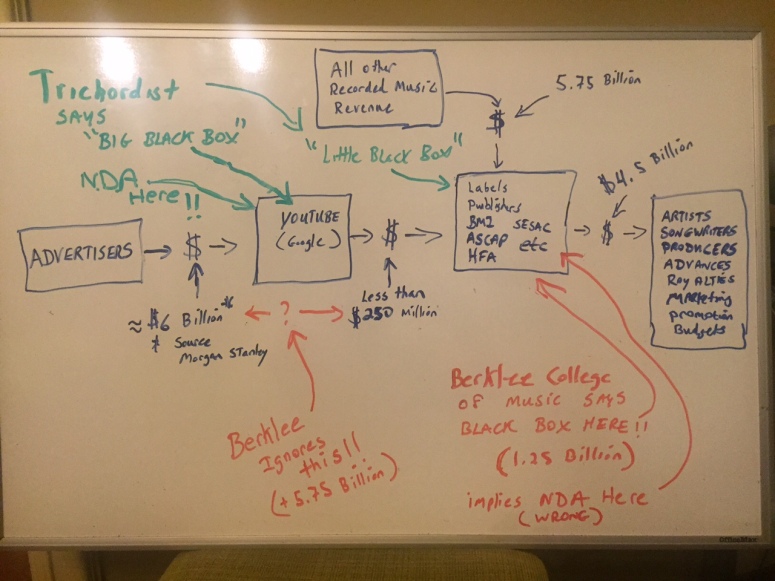 Berklee College of Music has still not addressed our fundamental criticism of their report.

A few days ago I had an email conversation with Panos Panay who may or may not have authored the flawed Berklee College of Music report on transparency and fair pay in the music business.   In our conversation he indicated that he thought our list of omissions were valid criticisms of their report.  I encouraged him to issue a follow-up report or letter.

Yesterday Berklee did indeed issue a follow-up.  But it was less of an actual correction or update and more of a defensive “fuck you.”  Yes, they squandered their opportunity to have a real discussion, by following up with a bullshit straw man argument, that completely misrepresents our criticism of the report.  These guys are not interested in a real and honest discussion.  Therefore don’t expect an honest discussion at their conference either. In other words don’t waste your money.

Here’s what they say about our criticism in their follow up:
“Some have questioned the role of digital services in this debate. It is important to remember that most online music services pay 70% of their revenue to rights holders (except YouTube, who should be encouraged to pay more than their current 50%), and we believe that this technology for distribution is a good thing. It is impossible to put the “Internet genie back in the bottle” — let’s not forget that the main source of industry woes 5 years ago was piracy — and at least a business model has evolved that has people paying for music again”

We don’t think “the technology” is a bad thing, and we are not trying to put the “internet genie back in the bottle.”  If you want to put it in terms of “internet genies” we are asking the internet genies to drop their NDAs and to exhibit more transparency on advertising revenues and expenses.   This is clearly illustrated in the whiteboard photo above.  Further the email record clearly  indicates that Panay understands our criticisms.  The only conclusion is that Berklee knowingly misrepresented our criticisms of their report.

This is classic demagoguing.  Trying to neutralize your critics by dishonestly claiming they are saying something they are not.  Berklee implies we are “trying to put the internet genie back in the bottle”  or somehow we are against streaming technology because they wish to portray us as hopeless luddites that are completely out of touch with the modern world. Yet facts are facts, our criticism illustrates a deeper understanding of the revenue flow in the digital world than their sloppy and biased report.

At the very least from a public relations stand point Berklee needs to learn to stop “poking the bear.”  Especially this bear.  They just gave us at least five new posts on why rights holders and artists should NOT go to their “Rethink”  conference.

BUT SPOTIFY IS PAYING 70% OF GROSS TO ARTISTS, ISN’T THAT FAIR? NO, AND HERE’S WHY…

Why Digital Exec’s ARPU is Bad Math and also Bad Philosophy for Artists.