What are the chances that PledgeMusic will just disappear into the night, never file bankruptcy/administration, never pay back the artists, fans and vendors and never disclose how much money they owe the artists?  The less they talk about Pledge’s misdeeds, the more likely that Pledge is simply never pursued by anyone and the statute of limitations will run.

What PledgeMusic should do is voluntarily publish their financials and bank statements from the beginning until today so that all the artists and consumers can tell what what in the world was going on and be able to compare it to what they were told by Pledge and who was on the board when the problems first arrived.  It would also be nice if they published all their board minutes (assuming they have any).

If that seems aggressive–understand this:  The longer Pledge is allowed to delay (and they’ve managed to delay for nearly a year) the more likely it is that they will say the books were “lost” and no one will ever know.

No government is looking into what happened as far as we know, and nobody else can afford to pursue them.  We agree with UK Music that called for a government investigation into the apparent shenanigans at Pledge as Billboard reported:

On Thursday (May 9), Dugher wrote a letter to small business and consumer minister Kelly Tolhurst, imploring her to look into PledgeMusic’s “speculated collapse” as the company heads into administration, and refer the case to the UK’s Competition and Markets Authority (CMA). “As a consequence, creators who used PledgeMusic’s services are likely to lose money if it goes into administration without resolving its outstanding debts,” he writes. 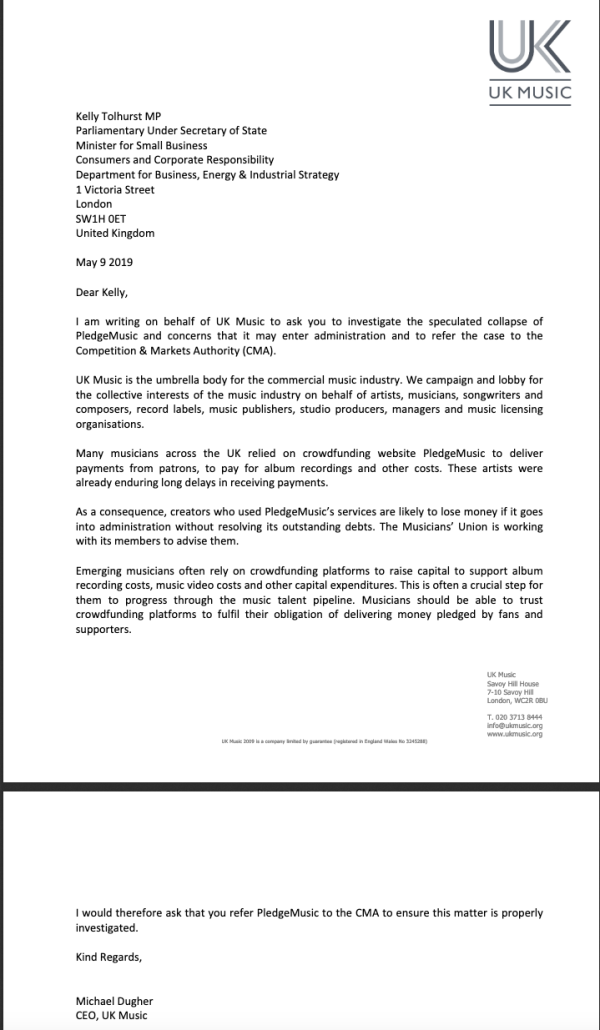 Guest Post by Iain Baker of @jesusjonesband: An update on the PledgeMusic Debacle (MusicTechPolicy)

Guest Post by Hattie Webb: The day I broke into the PledgeMusic office (@hrdwebb) (MusicTechPolicy)

Where Was the Board? Some Thoughts on Potential Legal Issues in Pledge Music “Administration” Bankruptcy (MusicTechPolicy)