We spend most of our time here focused on artists rights as it applies to music and musicians. But we wanted to see if the film industry was having the same challenges as music. We believe in the rights of all creators to consent and compensation for their work (ethical internet principles numbers two and four, respectively).

With the upcoming Academy Awards we wondered if it would be possible to find pirated versions of Zero Dark Thirty. It is  the most talked about film of the year which is nominated for five Academy Awards including Best Picture. But it could easily be any of the other nominated films, in any of the categories as well. We just picked Zero Dark Thirty. It’s also been widely reported that most of the nominated films have already been pirated and are online.

We were also curious what major brands might be supporting that piracy, and if any of those same brands might have advertising that appears on the broadcast of  The Academy Awards show itself. We would hope the Academy Of Motion Picture Arts and Sciences would be able to educate the various brands, advertising agencies and online ad networks about the damage they are doing to the creative community.

What makes this even more frustrating in the case of Zero Dark Thirty is that the film is not even out of theaters yet. At least with music, it is usually (usually…) commercially available before it is pirated.

Here’s what we found within a few minutes, on just two sites… 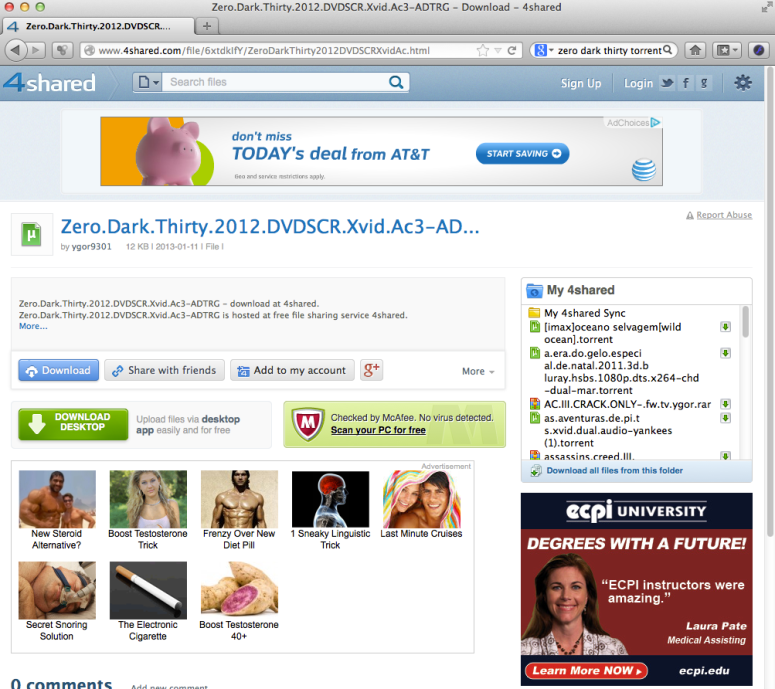 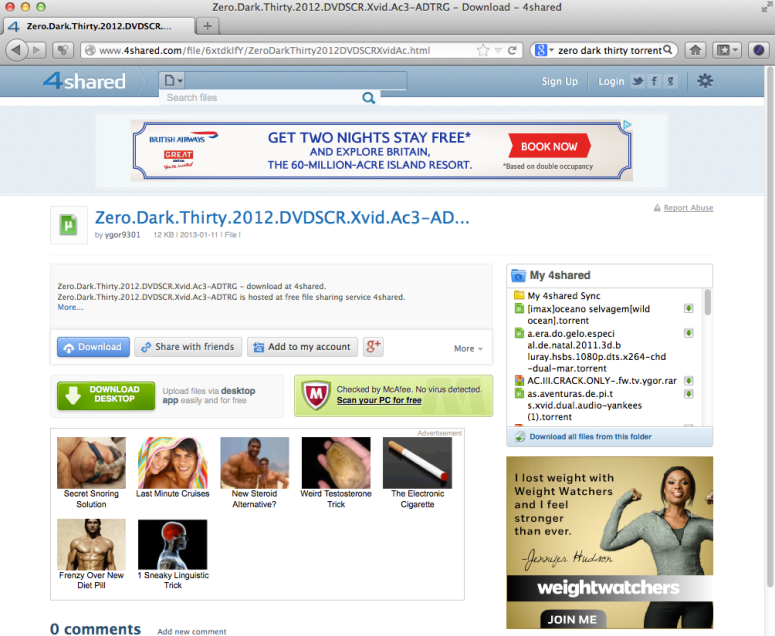 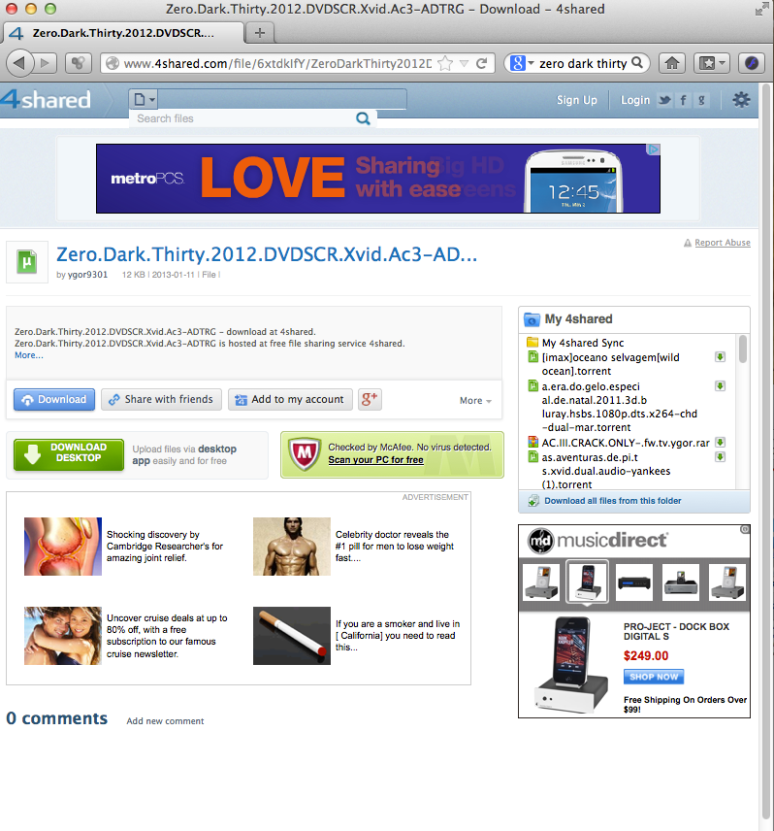 That’s just a couple sites to download the movie for free. What’s more common amongst film piracy are the faux subscription services that charge annual membership fee’s to stream all of their pirated movies (so much for information wants to be free, but movie want to be paid for…).

Here’s just one example where you can pay on a transactional basis of $.75 to stream the film or between $1.43 or $2.18 to download the film of varying quality.

So much for “Free Culture.” As it turns out there’s probably very little online piracy happening without money changing hands somewhere in the value chain. The money may be in advertising, or it may be in transactional or subscription fees, but one thing is for sure, people are getting paid and not paying the creators.

In the case of the above, and as we also asked did MegaVideo Charge for Streaming Movies the problem here is to address those processing payments such as American Express, Visa, Master Card and the various other banks such as Citi Bank and Wells Fargo (whom have also been seen advertising on pirate sites). At least PayPal is taking responsibility and denying service to pirate sites. That thanks largely to the good work being done by StopFileLockers.

We found a couple of things of interest as well regarding Google’s search. Despite there being (we’re guessing conservatively) literally thousands of DMCA notices to remove the film from search, The Pirate Bay still ranks #3 on the first page of search results! Surely Google as well as everyone else in the world knows the site was found guilty and it’s founders sent to jail. Yet Google has not delisted the site from search in it’s entirety which would be the right thing to do, knowing that the judgement against The Pirate Bay was upheld even by the Supreme Court of Sweden. 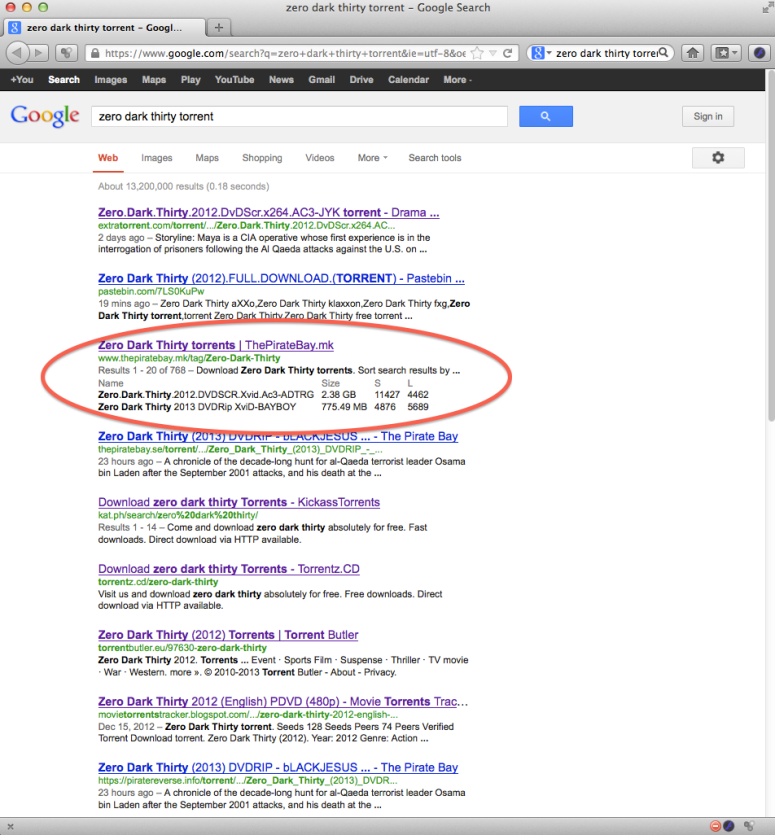 Of course a quick scroll down the page and the delisted link removal notices start to appear as follows:

In response to a complaint we received under the US Digital Millennium Copyright Act, we have removed 1 result(s) from this page. If you wish, you may read the DMCA complaint that caused the removal(s) at ChillingEffects.org.

Now why exactly is there a need, once a link has been delisted to post a notice to a site that then shows that very same link that had been lawfully delisted from Google search by the DMCA? In the screen shot below are shown just the first forty delisted links, but on that one notice alone there are over three hundred delisted links to pirated copies of Zero Dark Thirty in one way or another.

Make no mistake about it, every one of those previously delisted links is still active on the servers where it originated and it can simply be copied and pasted back into any web browser.

Further more, these links have been delisted due to the fact that most if not all of these infringing sites are not based in the United States and do not conform to United States law and therefore do not comply with the DMCA itself.

Is this all just a cat and mouse game for Google to profit from piracy? Draw your own conclusions.

The Black Keys have been very vocal about their opposition to the payment and revenue models of new streaming services like Spotify, but we wonder how the band will feel when seeing their music generating ad revenue for commercial level infringing websites like Filestube, Mp3 Twister, Share Beast and Mp3 Boo all as from a simple Google Search.

We also wonder if any of these brands will be advertising during the Grammy Awards for which the band is nominated for Best Album. These are major brands such as American Express, Delta Airlines, Dish Network, Nissan and M&Ms. All of whom we’ve seen running television advertising campaigns for their products and services.

Here’s a quick look at a random sampling of sites from searching Google. This is despite what might be hundreds or more likely thousands of delisted links from legitimate DMCA notices. Mind Boggling…

Despite the amount of delisted links, presumably to the largest infringers, the pirate bay can still top the search results listed. Also interesting is that the reach of the ad networks seems to go very deep into a long tail of very dispersed infringing sites like Mp3 twister. It appears that as brands and agencies are learning of their ads appearing on infringing and illegal sites, the ads are starting to migrate down stream to perhaps previously less visited sites. 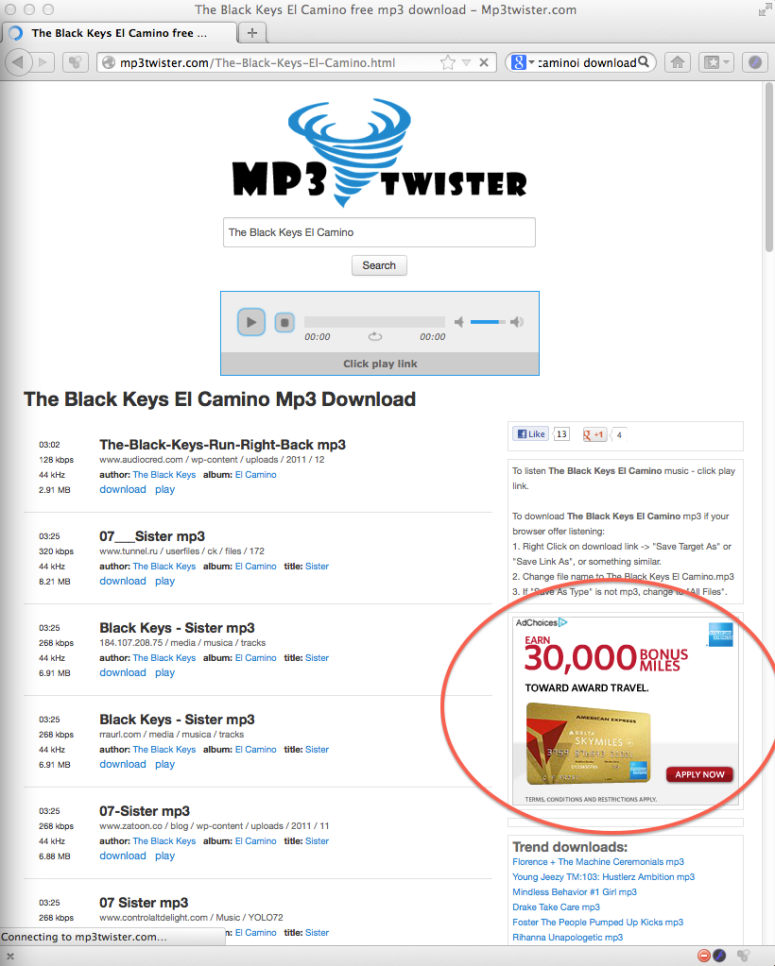 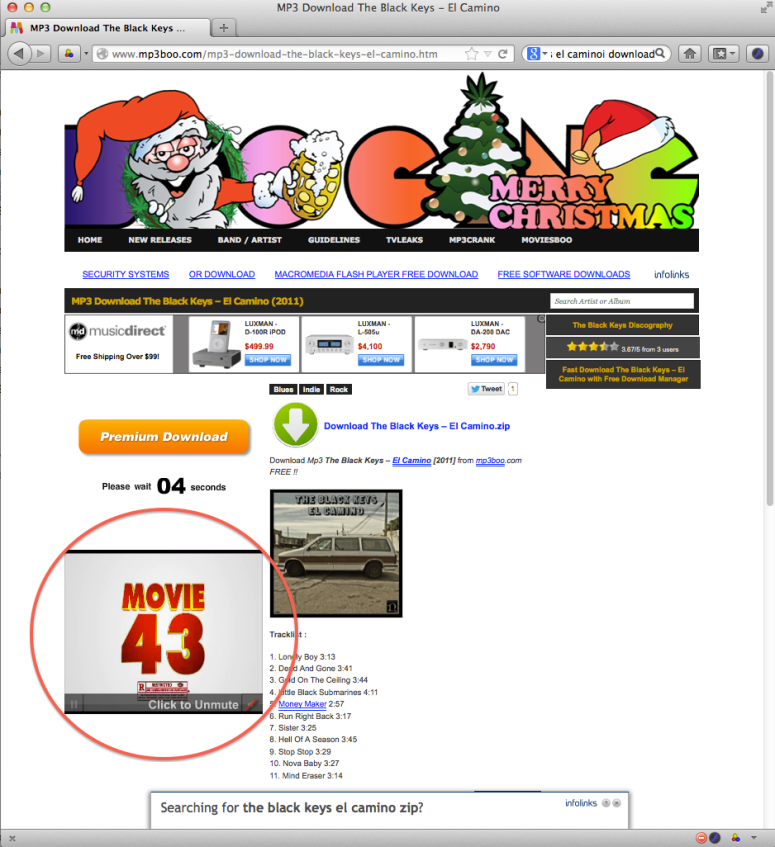 What is disturbing about the ad above for Movie 43 on Mp3 Boo is that it is for a film by Relativity Media, a Hollywood film production and distribution company. It’s entirely possible if we looked for this film it may already be leaked and pirated, and if not, most certainly will be within hours on the day it is theatrically released.

Is this really acceptable to our representatives on Capital Hill?