SF Music Tech is always a great place to get the temperature of the current ideology and trends relating to music and technology. Brian Zisk does a great job of creating an environment for the tech community to explore it’s relationship to music and musicians.

Artists should have creative control over their work, their careers and they should be paid fairly. We couldn’t agree more. This sentiment was echoed by Emily White of Whitesmith Entertainment on one panel and was ofter heard repeated during the day. Whenever there was a “shout out” to give props to musicians it was almost always met with universal applause from the audience regardless of the panel topic.

During the day the mantra of how artists deserved respect and payment was heard over and over. Everyone loves musicians. Musicians need to be paid. But some struggled to truly accept this as a universal concept that extended to businesses operating on the internet as well.

We’ve all heard the stories of musicians being exploited by record labels, music publishers, band managers, booking agents, etc. These tales are almost universally met with disgust, as they should be. But when artist exploitation takes the form corporate profiteering on the internet the tech community often recoils into a bit of selective reasoning and double standards.

So let us say this loud and clear about people throwing stones inside of glass houses… any wrong doing of illegally exploiting musicians for corporate profiteering should be unacceptable even it is happening on the internet.

How Musicians Are (Not) Making Money

Kristin Thompson from the Future OF Music Coalition noted that even though there may be many new revenue streams available to musicians, many of them only pay “micro pennies.” The consensus was clear and perhaps best summed up by Incubus manager Steve Rennie who essentially said, “eventually this should all work it self out where musicians can earn professional careers again, but the timing might just be really bad for this generation of musicians, and that’s the luck of the draw in life.” We actually don’t find that to be encouraging.

The irony and the disconnect didn’t take long to surface when East Bay Ray from the Dead Kennedy’s pointed out how exactly musicians don’t get paid from corporately funded music piracy sites when he showed a screenshot from mp3skull providing free downloads of his bands music financed by 1-800 Flowers and Alaska Airlines.

Of course those who believe in the exploitation of musicians for the profit of internet businesses had no problem rapidly resorting to name calling when it would be a lot more productive to acknowledge the problem as a detriment to the livelihood of musicians, and seek to work towards a cooperative solution to help musicians get paid.

What about Transparency, Being Open and More Human?

Ray went on to note how the negative effects of these sites create an environment that allows companies like YouTube to operate as an opaque black box. Using the best publicly available information he quickly calculated that YouTube’s 35% payment to artists (versus Itunes and Spotify’s 70%) could be a contributing factor to the 45% decline in professional musicians in the last decade. By Ray’s calculations (here at Digital Music News) the numbers may create a loss of 12,000 middle class musicians.

The Elephant In The Room

Some would like to argue that the revenue these sites are generating is inconsequential. These people seem to have difficulty understanding that if brand sponsored piracy can support 200,000 infringing domians that Google is tracking in it’s transparency report, then there is clearly enough there that musicians should be getting paid.

The real point is that there appears to be plenty of money being made online from the distribution of music, it’s just that the money is not being “shared” with musicians. 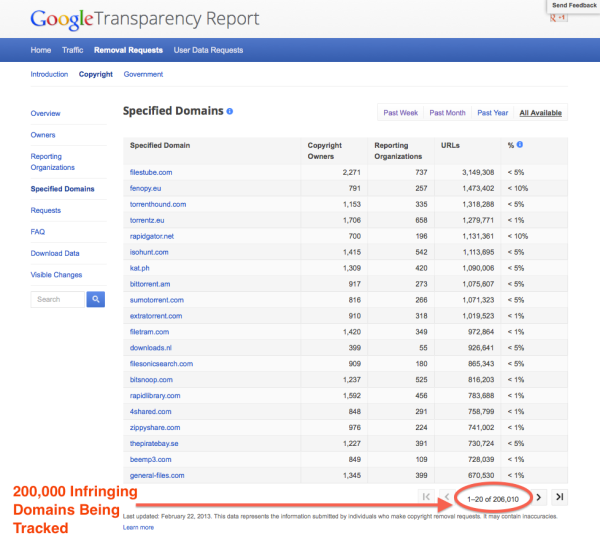 Any honest conversation about compensation to musicians has to address the single largest detriment to the revenue of artists at any level, which are the ad network financed music piracy sites. Ignoring these sites leaves out the most critical variable in evaluating fair and ethical compensation models when over 200,000 sites pay nothing at all to musicians with unlimited access to illegally free inventory. These sites profit from exploiting musicians and paying the musicians nothing.

Any legally licensed, legitimate music tech start up also has to acknowledge that mass scale, enterprise level, commercial infringement of music does NOT create a better environment for innovative entrepreneurs but rather a much more difficult one.

The truth is, there is no new professional middle class of musicians. The grand experiment of the digital utopia has been a massive failure for musicans and everyone at SF Music Tech now knows it. The soft back peddling by most on old hard line positions shows clearly that the reality for professional musicians has gotten worse, not better.

One of the most overheard phrases of the conference was, “we have to do better to get musicians paid.” Indeed, as we have noted here the truth is self evident, if the Internet is working for musicians, why aren’t more musicians working professionally? Not everyone aspires to work a day job, make music as a hobby and allow internet corporations to profit from their labor, illegally.

“Here we are, stuck with all these people who want music for free,” said Dave Allen, founding member of Gang of Four and interactive strategist at the branding agency North. “We have to find a way for musicians to make a living.”

If the tech and internet community are truly interested in getting musicians paid wouldn’t it make sense to start where money is already being made?