The European Copyright Directive was a great victory for artists, right?  The Silicon Valley multinationals were sent packing, yes?

True as far as it goes, but it does not go all the way.  Now each of the 28 member states of the European Union are to adopt implementing legislation at the national level to put the Directive into legal effect and they have two years to do it.  Google calls this an opportunity to continue the meddling and interference lobbying campaign.

How do we know?  Because YouTube’s CEO told us so in a fine specimen of oligarchical collectivism.

In a post on the oxymoronic YouTube “creators blog” (aka Pravda Chrome), YouTube CEO Susan Wojcicki tells us about the only thing that she really could say after Google’s massive dezinformatsiya campaign, but yet clearly outlines Google’s next steps during that two year implementation period:

While the Directive has passed, there is still time to affect the final implementation to avoid some of the worst unintended consequences. Each E.U. member state now has two years to introduce national laws that are in line with the new rules, which means that the powerful collective voice of creators can still make a major impact.

Especially the ones Google pays.

Google really only has a limited number of messages when it comes to copyright.  Like George Orwell’s Ministry of Truth, we have Google’s own variation on WAR IS PEACE–that being COPYRIGHT IS CENSORSHIP.  Given that Google doesn’t seem to have a Plan B when it comes to interference lobbying, we can bet that what Ms. Wojcicki means is that Google is going to commence the same kind of fake petitions, bot farming and paid messaging from YouTubers that were the embarrassing (and potentially illegal) hallmarks of Google’s strategy against the Copyright Directive.  The only difference is that this time it will be against the national legislatures (such as the House of Commons in the UK or the National Assembly in France) instead of the European Parliament.

It’s not really the only difference, though.  The other difference is that we are ready for them and we know what to watch for as do the members of the 28 national parliaments.

Americans should also realize that if you thought Google’s disinformation campaign against the Copyright Directive was bad, just wait and see what happens if the Congress should take up the DMCA safe harbor.  That party is just getting started.  And the party–so to speak–is all happening in Room 101–how many fingers, Winston?

“[A]s you begin to act in harmony with nature the Law garottes & strangles you – so don’t play the blessed liberal middleclass martyr – accept the fact that you’re a criminal & be prepared to act like one.”

YouTube’s CEO Susan Wojcicki is frantically wheeling around Europe this week in a despairing effort to establish a US-style safe harbor in Europe and undermine Article 13, the Copyright Directive for a Digital Single Market.

Let’s understand that the very concept of a safe harbor for YouTube has its roots deep in the pirate utopias of Internet culture–a fact that may get overlooked if you aren’t a student of the Silicon Valley groundwater.

The Value Gap really owes its origins to the anarchist Peter Lamborn Wilson who wrote the seminal text on pirate utopias under the nom de plume“Hakim Bey” entitled “The Temporary Autonomous Zone, Ontological Anarchy, Poetic Terrorism” (1991) or, as it is known perhaps affectionately in hacker circles, simply “TAZ.”  I for one am not quite sure what makes “poetic terrorism” different from unpoetic terrorism, utopian terrorism, anarchic terrorism, or just plain old terrorism, but it may explain why YouTube just can’t bring itself to block terrorist videos before they find an audience.

But the TAZ helps illuminate my own more truncated term for the Value Gap–the alibi. An alibi for a pirate utopia where the pirates run cults called Google and enrich themselves from the prizes they go a-raiding.

In the early days of online piracy there was a fascination with locating servers in some legal meta-dimension that would be outside of the reach of any law enforcement agency. Sealand, for example, captured the imagination of many proto-pirates, but Sealand is a little to clever to put themselves in a position requiring evacuation by the Royal Navy before the shelling begins.  So Sealand was ruled out.

Instead, Google–largely through YouTube–created its own pirate utopia through manipulation of the DMCA safe harbor, one of the worst bills ever passed by the U.S. Congress–and that’s saying something.  Google busily set about establishing legal precedents that would shore up the moat around their precious TAZ.  None of Google’s attacks on government should be surprising–anarchy is in their DNA.  As former Obama White House aide and Internet savant Susan Crawford tells us:

I was brought up and trained in the Internet Age by people who really believed that nation states were on the verge of crumbling…and we could geek around it.  We could avoid it.  These people were irrelevant.

And “these people” were stupid enough to give a safe harbor to protect the TAZ.  Because here’s the truth–the safe harbor that has made Google one of the richest companies in the world while they hoover up the world’s culture actually is the quintessential temporary autonomous zone.  It only exists in a changeable statute and the judicial interpretations of that statute, whether the DMCA or the Copyright Directive.  And like HAL in 2001: A Space Odyssey, they’re not going to allow that disconnection without a fight.

But YouTube’s CEO Susan Wojcicki will not be singing “A Bicycle Built for Two” as she flails about in the disconnect of YouTube.  Her basic argument is that “imposing copyright liability is destructive of value” for “open platforms” like YouTube.  “Open platforms” bear a striking resemblance to the TAZ, yes?  Ms. Wojcicki , of course, purveys a counterintuitive fantasy because unauthorized uses for which copyright liability accrues is what destroys the value of the infringed work.  What Ms. Wojcicki is harping about is how copyright infringement destroys value for YouTubeand its multinational corporate parent, Google.  This is what happens when stock options invade a pirate utopia.

Not only has she got it wrong, but what she is actually whingeing about is the threat posed to her YouTube pirate utopia by the Copyright Directive and the united creative community.  And as HAL might say, the YouTube mission is too important for me to allow you artists to jeopardize it.

It’s hard to believe that after a good ten years of being called out, YouTube still–still–cannot manage to stop neo-Nazi and white supremacist material from getting posted on its network.  We’ve been calling out YouTube on MusicTechPolicy and the Trichordist for these inexcusable failures again and again and again.  And yet they keep recycling the safe harbor as an alibi–and they’re doing it again in Europe on Article 13.

I can understand that YouTube doesn’t want to “censor” users and there may be close cases from time to time.  For example, I could understand why YouTube CEO Susan Wojcicki might not want to take down videos from Seeking Arrangement that encourages young women into a “sugar daddy” relationship to pay for college and health care.

But you know what’s not a close case? It’s right there in the title of the song–“Who Likes a N—“.  You would think that one would get picked up in a simple text filter of debased language.  But it wasn’t ten years ago and it still isn’t.  Not a close case.

And then there’s “Stand Up and Be Counted” by the White Riders.  It’s not that hard to figure out by listening to any of the many versions of this song that it’s a recruiting song for the Klu Klux Klan.  And it’s not that YouTube doesn’t know it–this version of the hate song has clearly been filtered by YouTube–oh, sorry.  Not by YouTube, but by the “YouTube community.”  But why is it that a KKK recruiting song doesn’t violate YouTube’s terms of service if it doesn’t shock Susan Wojcicki’s conscience? 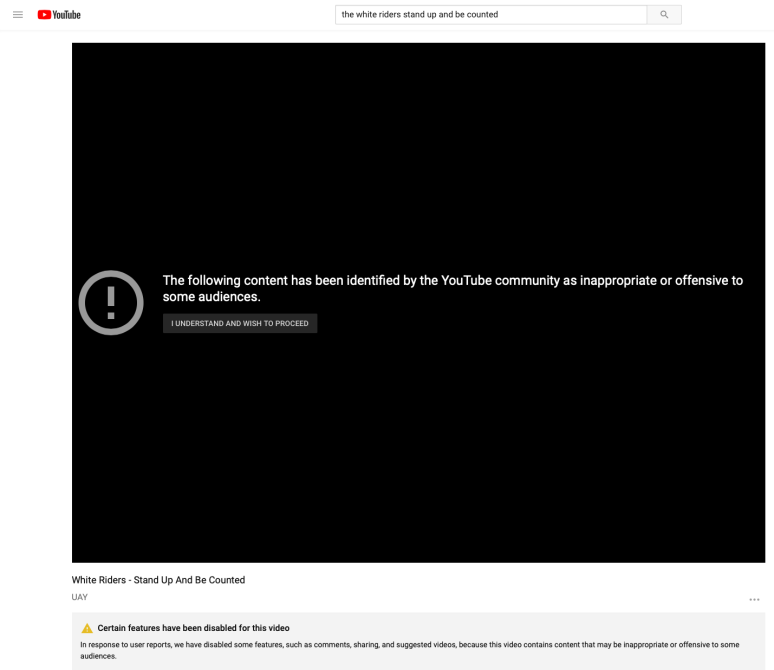 David Lowery called out YouTube and CD Baby for allowing hate rock to be distributed on their platforms.  Within hours, CD Baby pulled the account.  But not YouTube.

Let’s understand a couple things.  First, this is not hard.  The Anti Defamation League and the Southern Poverty Law Center have actual lists of these bands.  Both MusicTechPolicy and The Trichordist have been hammering this issue for years.  Simple word searches could accomplish a large percentage of the task–the N word, KKK recruiting and images of Adolph Hitler are not close cases.

And let’s understand something else.  When users post movies, television shows and recorded music on YouTube, all of those materials have gone through some kind of legal review for standards and practices.  That doesn’t mean there’s no fair use or that there are no parodies.  It does mean that a human has thought about it because free expression is a judgement call.

Free expression is deserving of human examination.  You cannot create a machine that will do this for you.  You cannot rely on crowd sourcing to stop all uses of these vile terms and images–because in every crowd there’s someone who thinks it’s all just fine.  That’s why they’re called mobs.

YouTube, Facebook and all the Article 13 opponents actually are using a complete spectrum of review.  The problem is that they are cost shifting the human review onto artists and to a lesser extent their users for two reasons.  First and foremost is that they hope not to be caught.  That’s what the safe harbor is really all about.  The value gap is just a part of it–the other part is the values gap.  How do these people sleep at night?

But I firmly believe that the real reason that they shift the human cost onto those who can least afford it is because they’re too cheap to pay for it themselves.  They are willing to take the chance because getting caught so far has been a cost of doing business.

The real cost of their business is the corrosive effect that they have on our discourse, our families and our children.  There has to be a way to make YouTube responsible for their choices–and CD Baby showed this week that it’s not only possible but necessary.

If YouTube and their paid cronies want to try to convince legislators that they deserve special protection, they need to live up to the standard that CD Baby set this week  And they need to do that before they get any further special treatment.

As we’ve said for years, the safe harbor is a privilege not an alibi.