ARPU. Do you know what that is? It’s Average Revenue Per User. Not withstanding the insulting connotation of referring to fans as “users” this is just bad on a number of different levels.

We’ll get into the fallacy of the $68 Downloads vs the $120 Streaming Subscriptions in a minute. But first, let’s just look at the fact the industry digital execs actually clocked ad-supported ARPU at $3 per user per year and did it anyway! Seriously? Really? Who thinks going from $68 to $3 is a good idea and then doubles down on trying to get sell in on it? Wow, just wow.

In a basic 80/20 model we would expect that 80% of the revenue would come from 20% of the consumers (er, um… “users”). This means the most valued “users” are now being artificially flattened DOWN to $120 per year.

Streaming Subscription fees as a representative of ARPU doesn’t work, because there are only TWO numbers that can be worked into the average, $120 and zero. So now you have the problem of trying to raise the causal user up to $120 per year while you’ve flattened down your best costumer (er, user). This is the crazy rational behind dropping streaming subscriptions down below $120… But wait… wouldn’t that just also artificially flatten the overall market even lower than the $120 ARPU? Yeah… you bet it would.

It’s truly astounding the lack of ability to use calculators and do simple math. We’ve pointed this out again and again. Even at 90 Million Paid Subscribers at $120 per year, that only generates $7.5b in industry revenue. Ninety Million Paying Subscribers. Just keep saying that over and over until it sinks in. 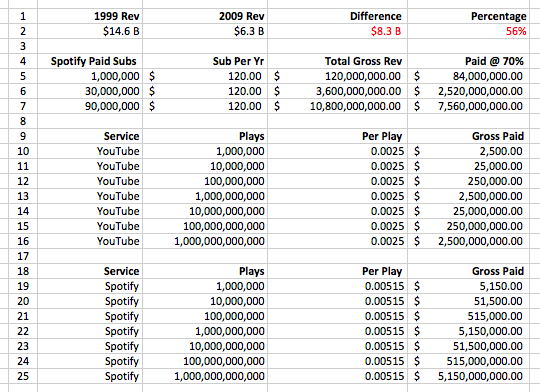 Subscriptions artificially flatten the market and require extremely high (and largely unrealistic) subscriber numbers because the actual number of “users” consuming music is probably at least double 90 million in the USA. That’s where an ARPU of $68 starts to make sense, somewhere around 110-155 million consumers, but most likely even higher. So, here’s the rub – who really believes that Spotify (or all subscriptions streaming services combined) are going to convert 10s of millions of casual consumers/users into $120 per year ARPU’s? They’re not and that’s why this model is screwed.

For streaming to truly mature the industry needs to embrace tier based, value pricing, so that a truly dynamic and flexible ARPU can be restored. The one size fits all Streaming Subscription ARPU is a lie, and the math shows us why.