In summer 2018 the campaign platform Saveyourinternet.eu set up to fight against the EU copyright reform. The campaign was organized by C4C, which is mainly financed by the American CCIA and the Open Society Foundation. This was criticized at the time. The website Saveyourinternet was later “taken over“ by EDRi; C4C was out.

Now there is a new action platform Pledge2019.eu, which claims to be “independent“ and „without any support from Google or other web giants.”

We need to look at this in more detail.

The Saveyourinternet.eu story
In the fight against the EU Copyright Directive, Saveyourinternet.eu’s campaign in summer 2018 was primarily responsible for the bombardment of MEPs with pre-written e-mails, automated tweets and arranged telephone calls, including discussion guidelines.

The campaign was organized by Copyright for Creativity (C4C) and its secretariat N-Square. The C4C has 42 members (EFF, EDRi, BEUC etc.) and, according to its own statements, is mainly financed by the Open Society Foundation (OSF) and the Computer & Communications Industry Association (CCIA). Members of this American industry association include Amazon, Cloudflare, Facebook, Mozilla, Google and Uber.

The page was registered in spring 2018 by the Belgian lobby company N-Square, which also works für Google. And today the registration data and the domain location are concealed by EURID and Cloudflare. The site does not have a legal imprint. There is only the notice that it is “managed” by the EDRi organization.

Epicenter.works from Vienna is responsible for the content. Legal notice and data protection declaration are, as very often is the case, borderline. But that is not the point. 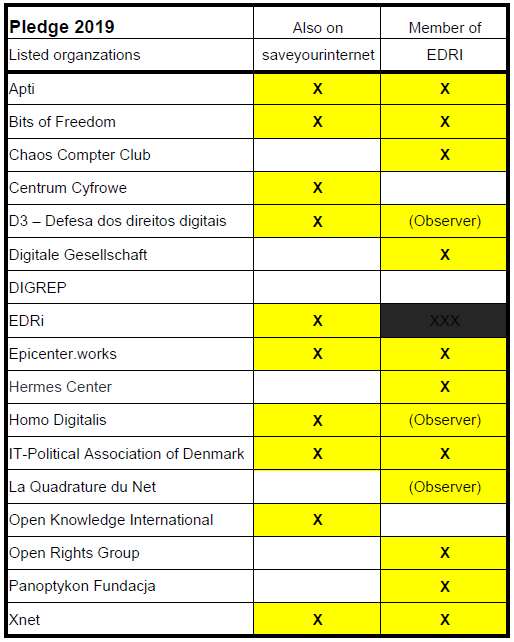 The site refers (as of 8.3.2019) to 17 organizations which are in some way connected to the site.
Besides EDRi, the current “manager” of Saveyourinternet.eu, there are 13 members of EDRi (3 of them “Observer”). Only three organizations do not belong to EDRi.

The impression is that the creators of the old campaign (Saveyourinternet.eu) also operate the new action platform (Pledge2019.eu).

The donors
Pledge2019 emphasizes its independence on the homepage: “This is an independent campaign without any support from Google or other web giants”.

Who exactly pays the bills of the campaign cannot be verified by an outsider. A look at the groups involved is very revealing indeed. To what extent do they appear independent? Have they received money from “Google or other web giants” in the past?

Even a first glance at the transparency reports – some of them are good but often completely non-transparent (more on this below) – is significant.
Even those responsible (Epicenter.works) reported in the Transparency Report 2017 that Mozilla is supporting them with €21,630; which is just over 6% of annual revenues. Another big supporter is the Chaos Computer Club with €15,000. Membership fees are not shown, Epicenter is mainly financed by donations.

Mozilla, which receives its income primarily from Google, also supports other stakeholders, including the Dutch Bits of Freedom, EDRi and the Open Rights Group from the UK. At Bits of Freedom, Mozilla is the largest single donor (petabit-donateur) with more than €10,000 per year. How much was actually paid remains open. At the Open Rights Group, the Mozilla Foundation paid £6,900 in 2016.

Other Internet companies are also mentioned in the reports as donors, such as Leaseweb (often named in connection with piracy) with €5,000 for Bits of Freedom or Microsoft (€10,000) and Wikimedia Germany (€5,793) for EDRi in 2017.

EDRi – The finances
Since Pledge2019.eu is mainly backed by EDRi members, it would be a good idea to take a closer look at the finances of EDRi.

These three foundations also supported EDRi in 2016 with five- to six-digit amounts. The largest donor with €127,080 in 2016 was again the Open Society Foundation.

The importance of foundations
Among the 17 organizations on Pledge2019.eu are two with a budget of less than €2,500 (IT Politcal Association of Denmark, D3 – Defesa dos direitos digitais). The Bulgarian organization could not be examined due to the Cyrillic character set.
Four organizations (Apti, Hermes Center, Homo Digitalis and Xnet) do not disclose funding either on their website or in the EU Transparency Register. However, at least the Open Society has information on Xnet.

Of the remaining 11 organizations, only the Chaos Computer Club is almost totally funded by membership fees. The other ten all disclose donations from at least one of the three listed foundations. In nine cases the Open Society Foundation finances; in three cases the Adessium Foundation; in one case the Ford Foundation.
The Centrum Cyfrowe claims to receive €281,242 from international organizations in 2018. The Open Society Foundation reports a core support of US$240,000 to this organization for the years 2017 – 2018.

Whether all supporters were found remains to be seen. While the Ford Foundation offers a database with all grants, Adessium provides at least a list of the recipients. The Open Society Foundation, which was classified by Transparify as America’s most non-transparent think tank in 2016, is now presenting a database with data from 2016 onwards. However, not all organizations that claim to be financially supported by the OSF can be found there, possibly due to intermediary organizations.

The Ford Foundation and the Open Society Foundation do not appear for the first time as lobbyists against Internet regulation. Both intervened on the subject of net neutrality:

„In areas where Google doesn’t spend the cash directly, it can rely on others to help. Foundations including […] Open Society Institute and the Ford Foundation align closely to Silicon Valley’s view on IP policy. The OSI funds a number of groups who style themselves as „civil society“ or „human rights“ (sic) outfits, including EDRI.“[theregister.co.uk]

Limited transparency
Some transparency reports are very detailed, at least in the years 2017 and 2016, such as EDRi or the Fundacja Panoptykon.

In other organizations, only single figures are disclosed, but the essentials are concealed. The epicenter is an example of intransparent transparency. It does show individual sums from donors amounting to €43,130 for2017. Ultimately, however, only 12.6 % of the funds received are declared. The rest is hidden in partly unexplained categories such as donations, sponsoring and grants, foundations.

A similar example of intransparent transparency is the Digitale Gesellschaft from Germany. The income in 2017is explained in only three positions:
– Membership dues, incl. sponsoring membership dues: €51,386.05 €.
– Grants received: €207,941.59
– Donations received: €14,930.26.
The rest you have to find yourself. With donations, which exceed €1,000 in the calendar year, one wants to publish names of the donors and the amount of the donations quarterly on the Website. Where on the extensive side remains unclear.
However, the call for donations in 2018 reports that funds were received from the Open Society Foundation as well as project-related donations from the City of Berlin, the Federal Office for Information Security (BSI) and the Federal Ministry of Justice and Consumer Protection (BMJV). According to the Digital Society, no funds have been received from companies.

But some are even less transparent. In some organizations, for example, only some donors are named, and no amounts are mentioned; e.g. Open Knowledge International.
Four of the 17 participants in Pledge2019.eu, namely Apti, Homo Digitalis, Hermes Center and Xnet, do not disclose any financing at all (or hide it perfectly on their pages).

It remains remarkable to what extent organizations from the USA (associations, foundations and companies) financially support European activists who are actively involved in legislative processes within the EU.

Volker Rieck is managing director of the content protection service provider File Defense Service (FDS), which works for numerous rights owners. The company also conducts studies on piracy and supports law enforcement agencies with its collected data. His articles occasionally appear on the FAZ, Tarnkappe.info, Webschauder and sporadically on the US blogs The Trichordist and Musictecpolicy. This is always about the various aspects of unregulated content distribution.