Spotify’s disastrous “dance like nobody’s paying” ad campaign has now been demolished in the national press, garnering negative coverage in Newsweek, Billboard, NME, Hypebot, and more. Sometimes big corporations slip up and show us what they really think of us, and this was one of those times.

Similar to the way many people bite into a cheeseburger with no consideration for the cow and farm of its origin, campaigns like Spotify’s widens the growing divide between listeners and creators. Audiences intellectually understand that music doesn’t magically materialize out of nothingness for the exclusive purpose of entertaining them, but as music continues its irreversible transition to all things digital, listeners are becoming less aware and interested in how artists create, record, produce, and share music. With a 2017 Nielsen Music report showing that, on average, Americans now spend over 32 hours a week listening to music, it’s clear that music is hugely important in the lives of listeners — just not in ways that provide meaningful visibility and support to musicians.

Ever heard that song “Put another nickel in / In the Nickelodeon”? It’s from 1950 (written by Stephen Weiss & Bernie Baum.)

Everyone loves streaming. But more than half a century later, most streaming services contend that a song isn’t worth a penny. I respectfully disagree.

Because a song isn’t really a song until someone listens to it, no  musicmaker should be faulted for utilizing all available platforms. But streaming in 2019 forces music makers and fans into the middle of a moral hazard. Music enthusiasts should be able to listen to streaming music without having to compromise their scruples, or that of their favorite bands.

Despite the lack of transparency in the music industry, The Trichordist has managed to cobble together an annual Streaming Price Bible.  It is the most credible summary I’ve found on what each streaming service pays, which may impact where Spotify listeners choose to put their dough-re-mi: 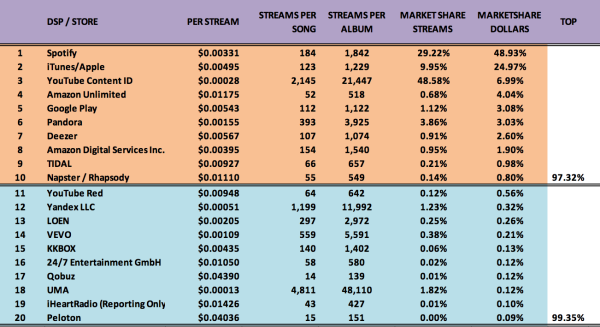 How Bad Is it for Music Makers?

Very different companies. Their commonality: free music, which has made them rich from ad revenue and data scraping, but mostly from their stock price increasing at the expense of musicmakers.

Let’s put this in context.  To earn a monthly US minimum wage, an artist on Spotify would need 380,000 streams by some estimates.

To make the same monthly salary as the average Spotify employee, a songwriter would need 288,000,000 streams.

For reference, the statutory rate for a song on a CD or download is 9.1 cents — 4.1 cents more than ye olde Nickelodeon of the 1950s.

You might say that’s better than the old days—but it isn’t as good as it looks, because the song rate was frozen for 68 years before it began gradually increasing … only to be frozen again in 2009, where it will stay until 2022.

Clearly, streaming has all but replaced CDs and downloads, but without replacing revenue from songs to musicmakers.

Money is being made from streaming if you look at it on an industry-wide basis.  But—due to the hyper efficient market share distribution of the “big pool” revenue share accounting instead of a user-centric model (or the “ethical pool,”) individual music makers are far worse off.  More than ever, streaming revenue is not paid to music makers who don’t share in the big advances or Spotify stock.

You Can’t Compete With Free

The vast majority of Spotify users are in the “free tier”. By offering free access, Spotify artificially distorts the streaming market and disallows competition amongst streaming companies. As musicians have learned the hard way, you can’t compete with free.

Spotify’s ongoing lobbying campaign against artist rights continues despite the unanimous passage of the Music Modernization Act in Congress last year (and the jury is out on the MMA and Spotify’s safe harbor).  Shocker—Spotify apparently reneged on agreements it made to accept the Copyright Royalty Board’s mandated increase in songwriter pay.  Another bonehead move that was publicly rebuked by songwriters from Spotify’s “secret geniuses” charm offensive, including Nile Rodgers and Babyface.

Spotify was joined by Amazon, Google, and Pandora in “suing songwriters” to appeal the Copyright Royalty Board’s ruling that increased the paltry streaming mechanical rate, which Spotify lawyer Christopher Sprigman argued against in court.

Apple Music does not have a free tier and yet was the only major streaming service that did not challenge the new royalty (44% more, which means 0.004 instead of 0.003, which is still bullshit.)

This may be because Apple recognizes that music helped save its ass from financial ruin 20 years ago. Math is not my strong suit, but numbers indicate music (via the iPod, a now-obsolete door stop) generated nearly half of Apple’s accumulated wealth not to mention introducing a new audience to Apple’s other awesome products.

Or it could just be that Apple understands creators and may actually like us.  There’s a thought.  We were early adopters—Macs have been in every recording studio and creative department for decades.

Apple Music’s intent to increase artist pay to a penny per side is its best yet, but now long overdue.   Which is a shame, because a trillion dollar market cap company could afford to redistribute some wealth.  If Apple offered a fair alternative, most would run screaming from the competition.

There are many who are more expert than me, some quoted in this post. I’d rather be staring into space strumming guitar and writing a song than here discussing music and money.

But I’m concerned for the next generation of artists, especially the musical innovators. Here’s why:

There used to exist a sort of musical middle class. Artists in all mediums expected financial struggle but there was the possibility of making a living and even growing as an independent artist.  That might include a record deal or selling CDs at a gig in order to make it to the next town.

Songwriters could get an album cut and get by or even do well if the album sold (Jody Gerson has a great explanation of this.)  Musicians of quality could see a light at the end of the tunnel.

Streaming has “disrupted” all of that.

Bands’ streaming access may—may—help build an audience that may somehow convince talent buyers to book gigs that route your tour, which is awesome. But sustaining a career is still cost-prohibitive for many.

Thus the Top 40 is full of the children of the affluent.

Those of us who have been making music for awhile will remember the optimistic, 1990s-era “monetize the back end” argument: bands on the road can make up income lost to streaming by selling merch.

I tour, too. I wish the best to every band who does so.

But not every musician can travel … or got into music to sell a fuckin hat.

Another common sense rebuttal to “shut up and tour:” INCOME FROM LIVE SHOWS WAS NEVER MEANT TO REPLACE THAT OF MUSIC SALES — plus both have investment costs and overhead to produce.

Sorry to yell. Just sick of this lie that to make up for streaming losses all recording artists, especially senior citizens, should tour forever. Or the assumption they are all rolling in dough! Tell that to the punk rock drummer, alto player, the cellist, the songwriter.

So if streaming is to be the primary method of music distribution — if not the only one — then pay artists fairly.  Or it really will be lights out, if not for the huge artists who regularly celebrate stupidity then for the ones whose songs you want played at your funeral.

Without musicmakers, Spotify has nothing. When Spotify says “dance like nobody’s paying,” it’s because they don’t.

Given support from listeners and lawmakers, this era of economic injustice via streaming may one day be a footnote.  Fans should not be paying for music they don’t listen to which is what has been happening and is a hallmark of streaming gentrification.

Now, listeners must demand fair pay for musicians they claim to love, whether it is higher streaming royalties or a user-centric royalty allocation—or both.