This EFF form allows anyone anywhere to repeatedly call Senators from this webform, no identification, no email, phone or geolocation verification.  Pure cyberturfing. BTW the “tens of thousands of dollars” is false.  Also not mentioned: CASE ACT is a voluntary small claims court for copyright claims. Explicit opt-in process. No one is “on the hook” for anything.

It’s deja vu all over again.  Looks like Google-funded astroturf groups EFF and Public Knowledge are using the same questionable tactics that Google affiliated astroturfs used in the EU to try to defeat the Copyright Directive. Spambots, Tweetbots, and automated calls.

If you’re not familiar with what happened in Europe here’s a very brief summary:

EU parliament proposed some copyright changes that required digital platforms like Facebook and Youtube to do a better job policing their platforms for copyright infringement.  Naturally, Google did what they always do and mounted what can only be described as a massive disinformation campaign against the proposed copyright changes.  Most of this took the form of angry emails, phone calls and tweets to EU parliamentarians.  And at first it worked.  In July 2018 cowed MEP (Members of European Parliament) voted against a sort of fast track approach to legislation.  This blog noted some very non-organic patterns in the emails, tweets and automated calls (example tweets to Spanish MEPs stayed at a constant frequency in the overnight hours). Further, this blog noted the financial connections between the groups running the campaign and Google.  Eventually, the Times of London and Frankfurter Allgemeine Zeitung became aware of this and ran high profile stories detailing the entire fiasco.

Anatomy of a Political Hacking

The good news is this, EU parliamentarians were so outraged when these tactics were exposed, support for the Copyright Directive dramatically increased and eventually passed.

Now Google-funded groups like EFF and Public Knowledge are using the same tactics in hopes of creating the appearance of a fake grassroots uprising.

Here Public Knowledge is pushing the same call spamming tool as above.  The difference here I was able to “repurpose” the spam tool to connect to the Public Knowlege office (Hey, it was research!).  When I tried it on my own number I was able to make about 3 calls a minute. It would be possible to harass the shit out of anyone with this tool.  It’s like leaving a loaded phone DDOS gun around for anyone to use. I do not believe that this is a bug or defect.  I think that this is the intention of putting these tools out there.  They hope the angry internet-paranoids will abuse these tools. Just like they did in the EU.  Otherwise, why not just provide a phone number to call?  Type in your address and your senator’s phone number appears.  Take out your phone and dial the number. Or Why make the call come from a webtool on the Actnow.io server?  I say it’s cause it is easily hackable and automatable.  Fuck these groups.  Both are objective dangers to our democracy. 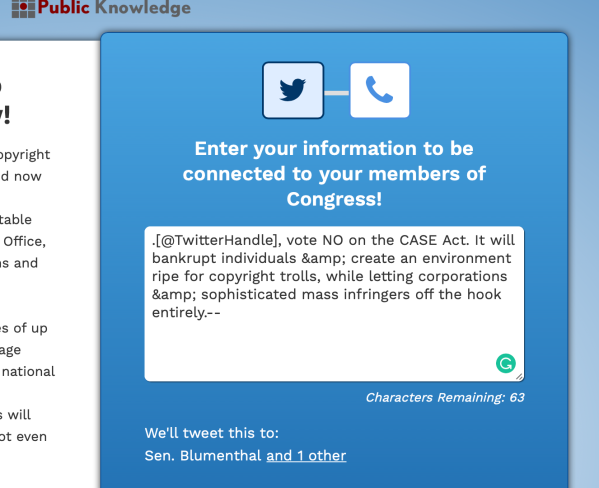 There are also tools available for emailing and tweeting your Senator.  I was able to fire off tweets at about a dozen a minute. I changed the text to alert the Senators this was a demonstration.  Can you imagine what 20 sock puppet accounts could do?  Swamp all hundred Senators in a few minutes! Again no geolocation verification.  I could be in Tehran, Belarus, Davos or Mountain View.  No need to be in US!

They are even providing tools for leaving comments on official government websites of Senators. Pretty sure that I read somewhere that there are regulations that forbid the use of automation to leave comments on most federal govt websites. Maybe someone can point me to the text? In the meantime you can always repurpose the tools to spread the truth about these folks.