I believe there are only two public policy issues that President Trump and Vice President Biden agree upon: The status quo of Section 230 of the 1996 Telecommunication Act is no longer acceptable; TikTok is a threat to our cyber and national security.

Interesting enough, these two issues are interlinked. Section 230 of the Communications Decency Act (CDA 230) gives free reign to Internet platforms operating in the United States to act with impunity as it relates to user generated content. Predictably, this has led to unintended and destructive consequences. But, left unsaid is what Big Tech doesn’t want anybody to realize – CDA 230 also unwittingly shields China as America’s top geopolitical adversary challenges U.S. national and economic security right here at home.

According to Bloomberg, Chinese-controlled “ByteDance/TikTok, led by Zhang Yiming, is becoming a viable rival to the dominant American online behemoths, Facebook Inc. and Alphabet Inc..” Last year, TikTok’s net profit was approximately $3 billion and the company estimates that it has about 80 million monthly active users in the United States, 60% of whom are female and 80% fall between the ages of 16 and 34. Of particular concern is that 60% of TikTok users are Gen Z, which is the largest generational cohort in American history and will include 74 million people next year.

As a champion of free markets, I would normally be among the first to applaud an upstart bringing a competitive “A” game to challenge dominant incumbent players no matter where they are based. But we have learned from experience that homegrown social networking companies like Facebook/Instagram, Google, and Twitter exert dominant and controversial influence in U.S. public policy debates – what sort of foreign influence should we expect TikTok to exert on this year’s election.

Lately, I’ve found myself asking should I really be concerned?

A recent article by Larry Magid was the tipping point for me in this debate. The headline of the article was, “How A 51-Year-Old Grandmother and Thousands of Teens Used TikTok to Derail A Trump Rally & Maybe Save Lives.” Magid lays out the series of events illustrating how attendance at a Trump rally was manipulated by a viral video of a grandmother from Iowa. It sounds innocent enough until you realize that the inflated numbers of expected attendees started when fans of K-pop, the popular Korean music genre, ordered free rally tickets from the Trump campaign with no intention of actually attending. Next, according to the article, the “grandmother from Iowa” posted a video on TikTok urging her mostly young viewers to “Google two phrases, ‘Juneteenth’ and ‘Black Wall Street,’” before also suggesting that they register for two free tickets to the Trump rally. Her video post went viral and motivated young TikTok users to request hundreds of thousands of tickets.

After reading this, I was left with a simple question: Whether Trump or Biden, doesn’t it bother anyone else that a Chinese-controlled social network was used to interfere with an American presidential campaign event at the same time that tensions between our two countries are escalating? Even Vice President Biden has banned TikTok from campaign phones and computers. As Mr. Magid’s article acknowledges, “(i)t’s long been known that social media can have a huge impact on politics. That’s why Russia tasked a state-run agency to flood social media with posts and ads to get Donald Trump elected.”

Two additional facts build on the story told by Magid. Another recent article, titled “Anonymous Hackers Target TikTok: ‘Delete This Chinese Spyware Now,” states that TikTok is “a data collection service that is thinly veiled as a social network. If there is an API to get information on you, your contacts, or your device, they’re using it.” The other fact to connect is that the key driver for algorithms and artificial intelligence, especially when dealing with human behavior, is vast data on human interaction. It is one of the main reasons that Microsoft is so interested in buying TikTok.

So now we are confronted with a Chinese based “social networking” site growing more rapidly than any homegrown US competitor and collecting more data on our youngest and most easily influenced demographic at the same time that China, Russia, and Iran are using social networks to undermine our democracy. Let’s not forget that this social networking site has been proven not to be secure and agreed to pay $5.7 million to settle Federal Trade Commission (FTC) allegations that it illegally collected personal information from children, the largest civil penalty ever obtained by the FTC in a children’s privacy case.

But most alarming is that TikTok is protected by CDA 230 and cannot be held accountable for the actions of its “users” even if those “users” happen to be foreign governments. For example, if the Chinese government is leveraging TikTok for its own strategic advantage, the US government has no recourse against TikTok for these activities. The impunity provided by CDA 230 to TikTok, as well as Chinese and other hostile governments, directly threatens our democratic process. Even more troubling is the fact that TikTok, along with Facebook and other social networking sites, cannot be held responsible for illegal conduct occurring on their platforms – even when they know about it.

Besides the potential of interfering with our elections, TikTok also continues to facilitate the sale of illegal drugs. Below are three screenshots of illicit activity being perpetrated on TikTok. The first two images show illegal drug sales of opioids and the other shows illegal drug sales of steroids. Remember, TikTok’s core demographic and the intended audience for these posts consists primarily of members of Gen Z, those born between 1995 and 2012 –our children.  [Similar to Google’s near-indictment and $500,000,000 fine for violating the Controlled Substances Act.] 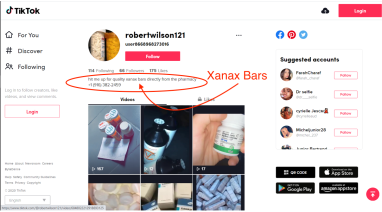 I will leave you with a quote from a recent speech at the Hudson Institute by FBI Director Christopher Wray. He stated:

“The Chinese government is engaged in a broad, diverse campaign of theft and malign influence, and it can execute that campaign with authoritarian efficiency. They’re calculating. They’re persistent. They’re patient. And they’re not subject to the righteous constraints of an open, democratic society or the rule of law… China, as led by the Chinese Communist Party, is going to continue to try to misappropriate our ideas, influence our policymakers, manipulate our public opinion, and steal our data. They will use an all-tools and all-sectors approach—and that demands our own all-tools and all-sectors approach in response.”

For addressing this clear and present danger, the United States must modify CDA 230 and ensure that we have all the tools necessary to hold TikTok accountable for criminal activity that occurs by “others” on their platform. Importantly, this includes illegal actions taken by the Chinese government to misappropriate the site, and the massive amounts of data it collects, in order to inflict harm on the US and its allies. Finally, we must avoid inadvertently making this problem worse by spreading the excessively broad and antiquated immunity of CDA 230 through trade agreements with other countries.

Rick Lane is the founder and CEO of IGGY Ventures. IGGY advises and invests in technology startups and public policy initiatives that can have a positive societal impact. Rick served for 15 years as the Senior Vice President of Government Affairs of 21st Century Fox. Before joining Fox, Rick was the Director of Congressional Affairs focusing on e-Commerce and Internet public policy issues for the United States Chamber of Commerce.