Here we go with the current year update.

This data set is isolated to the calendar year 2019 and represents a mid-sized indie label with an approximately 350+ album catalog now generating over 1.5b streams annually. Streaming is now a fully mature format, and it is also the number one source of revenue for recorded music. Streaming in all configurations now accounts for 64% of all recorded music revenues. Head on over to the RIAA US sales database [here] to check out the numbers. Pro Tip: Remember to adjust for inflation!

We are keeping a simplified chart again this year. We’ve extended to the top 30 streamers which represent 99.87% of all streaming dollars. The Top 10 streamers account for over 93% of all music streaming revenues (down from 97% last year). The Top 5 account for over 83% of all streaming dollars (down from 88% last year). The drop in overall revenues in the Top 5 and Top 10 are the result of YouTube’s Content ID pulling down the overall revenues / per stream. 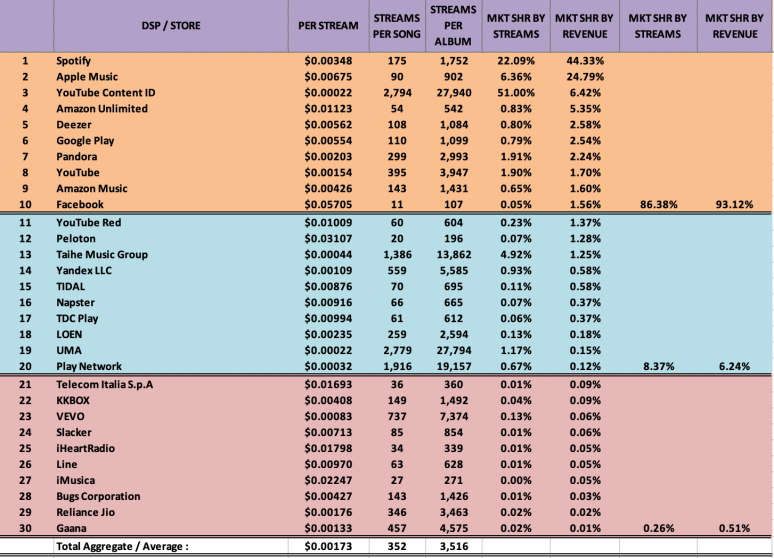 This is the first time we have not seen the Spotify per stream rate drop since the service launched a decade ago. The Spotify per stream rate has stabilized moving up just slightly to .00348 from .00331.  In other words Spotify is paying out about $3,300 – $3,500 per million plays. We’re working with a very large sample that has aggregated all streams and revenue against both subscription and ad supported revenues for a single per stream average. This overall average is helpful for anyone who wants to calculate gross revenues by simply looking at the numbers on Spotify itself. For those who may not know, there is a simple “trick” to see the streams of any song on Spotify. On the desk top app, go to the album view and hover your mouse/cursor over the ||||||| at the far right side of any song, just to the right of the song length. Once there the plays for the song will materialize just below the song length.

Apple’s per stream rate also stabilizes this year hitting a per stream rate of .0675 which is much closer to where it was two years ago at .00783. Our numbers from 2018 showed a dramatic drop in Apple’s rate at .00495 which we attribute to an expansion into new territories and a large number of 90 day free accounts that had not matured to fully paid subscribers.

In looking at the per stream rates for song and album equivalents, you might want to read this article by Billboard (as of 2018) on the current calculation of how many streams equal an album for the purposes of charting. The report states that, “The Billboard 200 will now include two tiers of on-demand audio streams. TIER 1: paid subscription audio streams (equating 1,250 streams to 1 album unit) and TIER 2: ad-supported audio streams (equating 3,750 streams to 1 album unit).” Our numbers suggest however it would be more fair to average all revenues, against all streams (including content ID), and that actually lands at about 3,516 streams per album across the board.

These numbers are from one set of confidentially supplied data for global sales. If you have access to other data sources that you can share, we’d love to see it.

[EDITORS NOTE: All of the data above is aggregated. In all cases the total amount of revenue is divided by the total number of the streams per service  (ex: $5,210 / 1,000,000 = .00521 per stream). In cases where there are multiple tiers and pricing structures (like Spotify), these are all summed together and divided to create an averaged, single rate per play.]

YouTube/Google and Amazon Are Using Their Power Against Creatives

If you’ve been watching the last 15 years or so of web development, you’ve seen a relatively wide open field of entrepreneurial potential gradually get taken over by major corporations in a manner similar to what occurred in industrial societies beginning in the late 1800s. They may be dropping fewer bodies than did the industrial giants but close-to-monopoly digital land grabs by companies like Google and Amazon have put them in a situation where they seem to feel that any terms they name are acceptable if they have the power to force compliance.

Amazon’s current battle with Hachette is but one example of how they’ve used their dominating position in book and ebook retail on the web to have their way with companies that are often struggling to survive.

YouTube’s dominance of the web video space sets up a similar near-monopoly situation in which they’re willing to use their position to behave in monopolistic fashion and force non-compliant entities into line.

The Government has been “seduced” by technology companies such as Google, and is “cosying up” to them, even though they keep their tax contributions to a minimum, leading music executive Martin Mills has warned.

Mr Mills, who founded Adele’s record label, Beggars Group, claimed his company pays more tax in Britain than Google, Facebook, Apple and Amazon. But he said creative businesses like his receive less support from the Government.

READ THE FULL STORY AT THE TELEGRAPH UK:
http://www.telegraph.co.uk/finance/newsbysector/mediatechnologyandtelecoms/9844225/Government-seduced-by-tech-firms-like-Google.html

March 4, 2014March 3, 2014 by trichordist
East Bay Ray of The Dead Kennedys  and I had an informal bet going.  Well maybe not a bet,  just a sort of prediction that once Ray spoke against ad supported piracy at SF Music Tech,  the music tech bloggers would start with the usual name calling.
Sure enough right on cue we see Bruce Houghton’s Hypebot giving Mike Masnick (see the “Google Shill List”) a platform to bash Ray and other  artists. “Whining” “Old” “Grumpy” and “Rant” were some of the unfair and unbalanced terms  that Ray and I predicted they would use in the de rigueur  post–SF Music Tech cyber bullying. And they did.
(compare to SF Weekly less hysterical coverage here.)
This is pretty sad since ending ad supported piracy is a no-brainer—even Google and Yahoo! fall over themselves to try to explain their unexplainable connection (see USC Annenberg Innovation Lab report).   Both artists and the legitimate music tech firms are negatively affected by ad supported piracy.  For instance legitimate music streaming services have to compete against these same unlicensed services for ad revenue.   Why the music tech space bloggers fail to grasp this is a mystery.
Bruce Houghton also owns the talent agency  Skyline Agency.   This agency tends to have a lot of “Old” and “Grumpy” artists that would probably go on a “Rant” if they were to see that their agency head is tacitly defending this practice.  So we prepared a few screenshots.
Any comment Bruce?  Do you think that this practice is acceptable?  How do our “future” music models like streaming compete with the  guys that don’t pay any royalties to artists?   We’re all ears.

Pure Prairie League piracy brought to you by BMW. 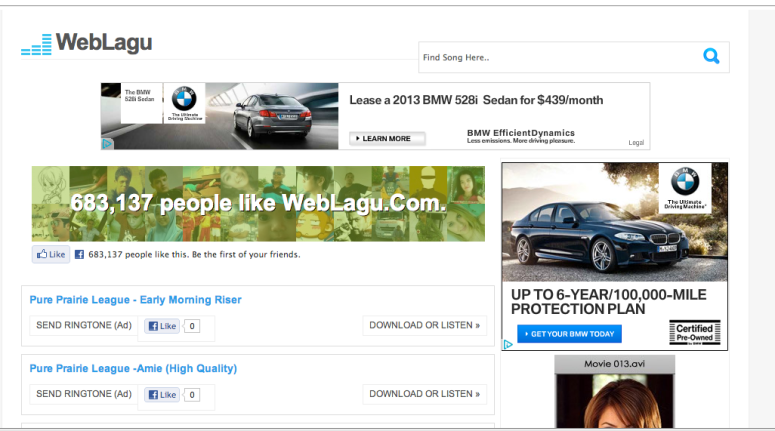 Al Stewart By Celestion and zZounds. 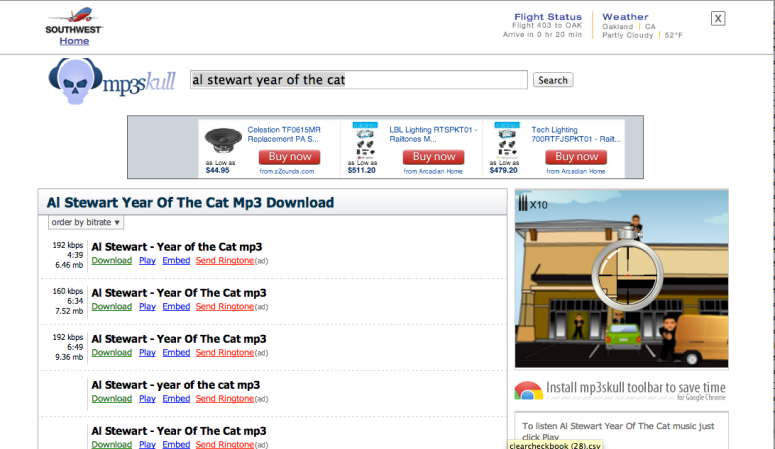 The Smithereens By Priceline 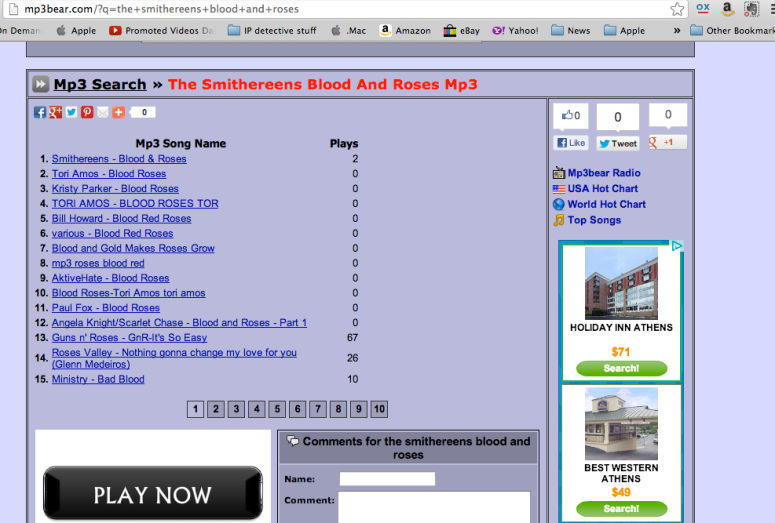 Grand Funk Railroad By Banana Republic, Amazon and others. 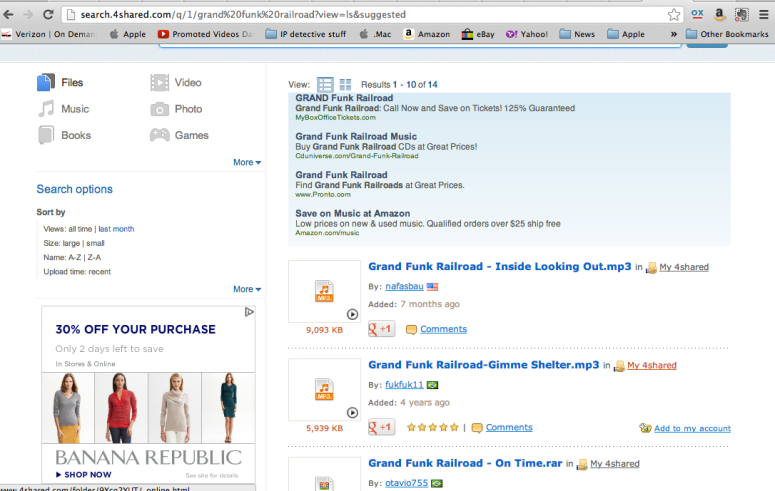 We completely agree with what Bono said in USA Today,

“…somebody should fight for fellow artists, because this is madness. Music has become tap water, a utility, where for me it’s a sacred thing, so I’m a little offended. The Internet has emasculated rather than liberated artists…”

We couldn’t agree more and we’ve been happy to see more artists speaking out publicly.

The situation is effecting artists at all levels like Aimee Mann, Neko Case, Talib Kweli, Ben Gibbard and Death Cab For Cutie, Jared Leto and 30 Seconds to Mars, Neil Young and Tom Waits to name just a few. These artists represent a wide spectrum of diversity and all are effected by the illegal exploitation of their work.

Let’s be clear about this. It’s about money. A lot of advertising money supporting the people ripping off artists to further their own wealth. Brands hire advertising agencies. Advertising agencies hire ad networks. Ad networks pay infringing and illegally operating sites, many of which are based outside of the USA.

Bono, here’s your haul for one nights research… Someone should have a talking to these brands and ad networks, will you join us on Madison Avenue? 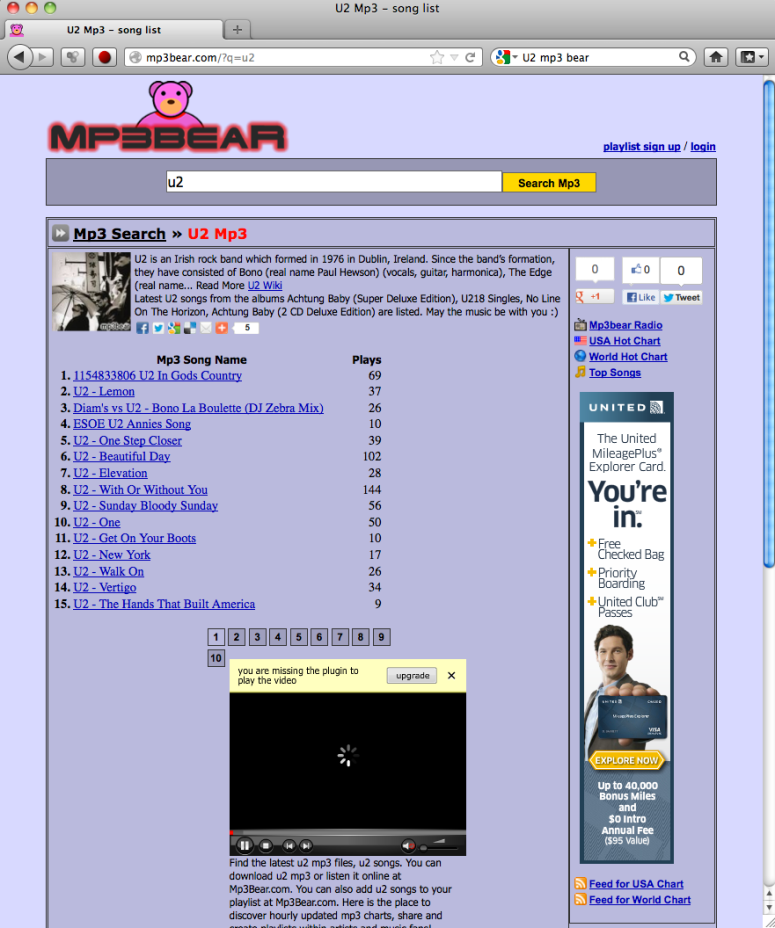 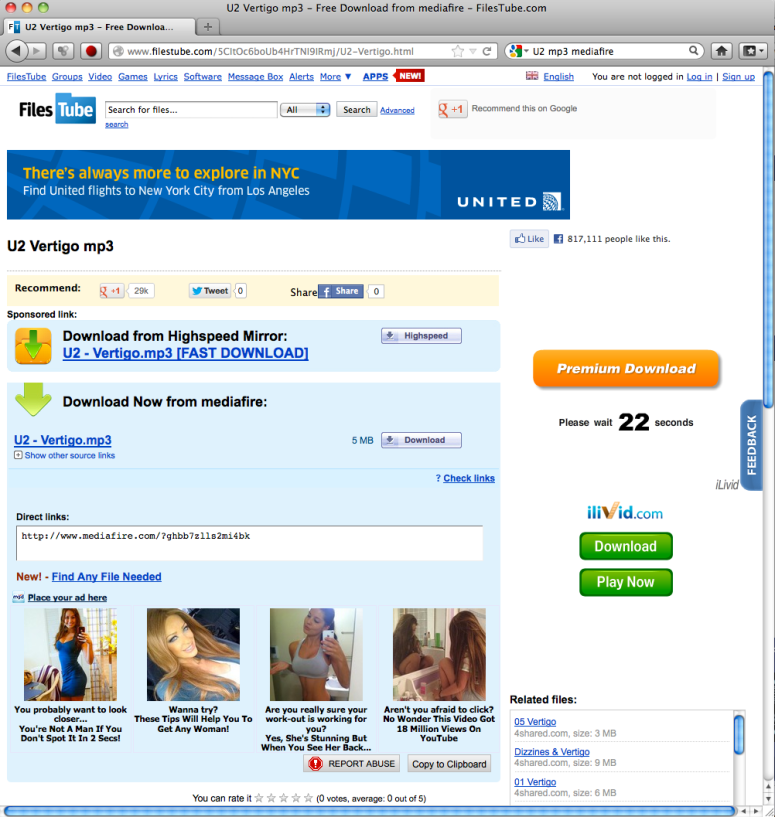 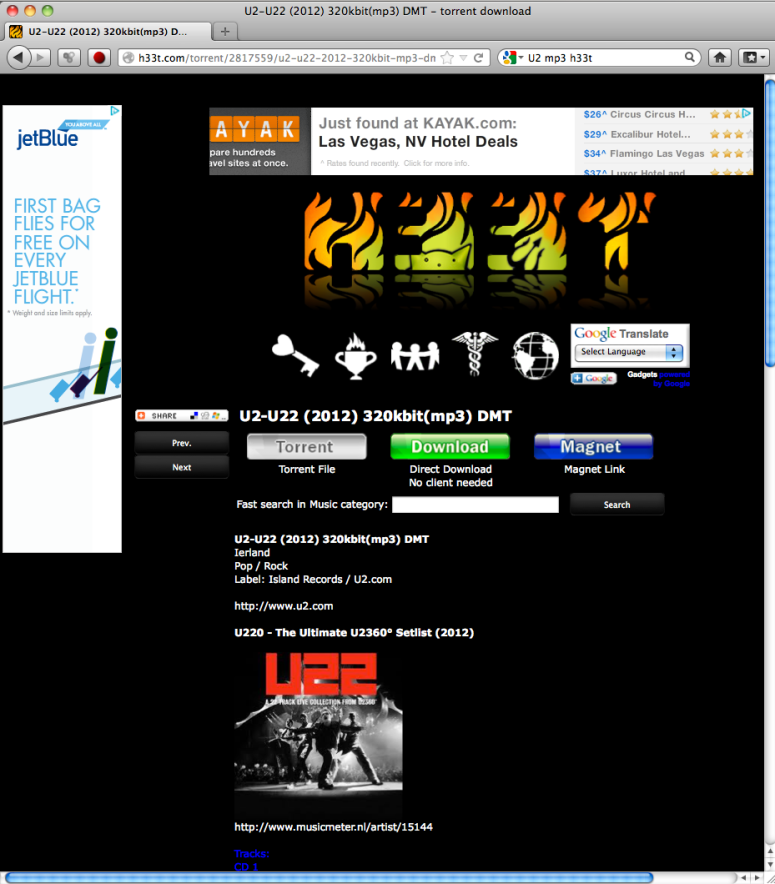 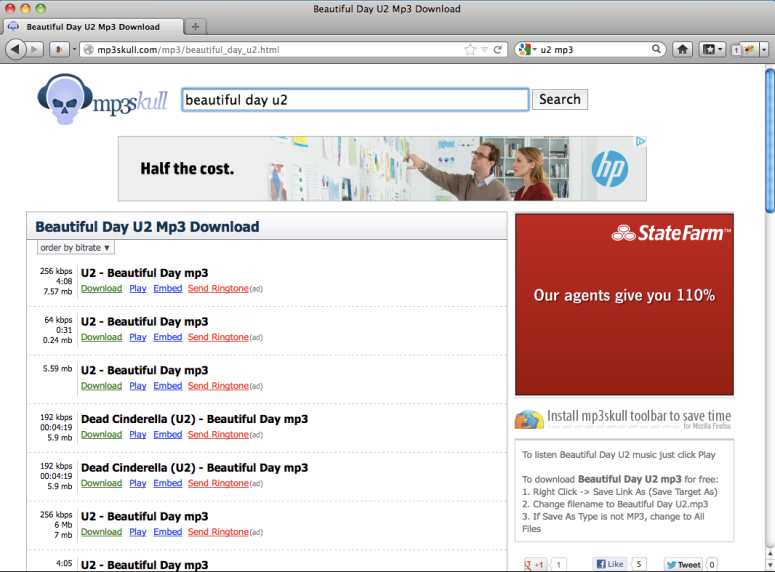 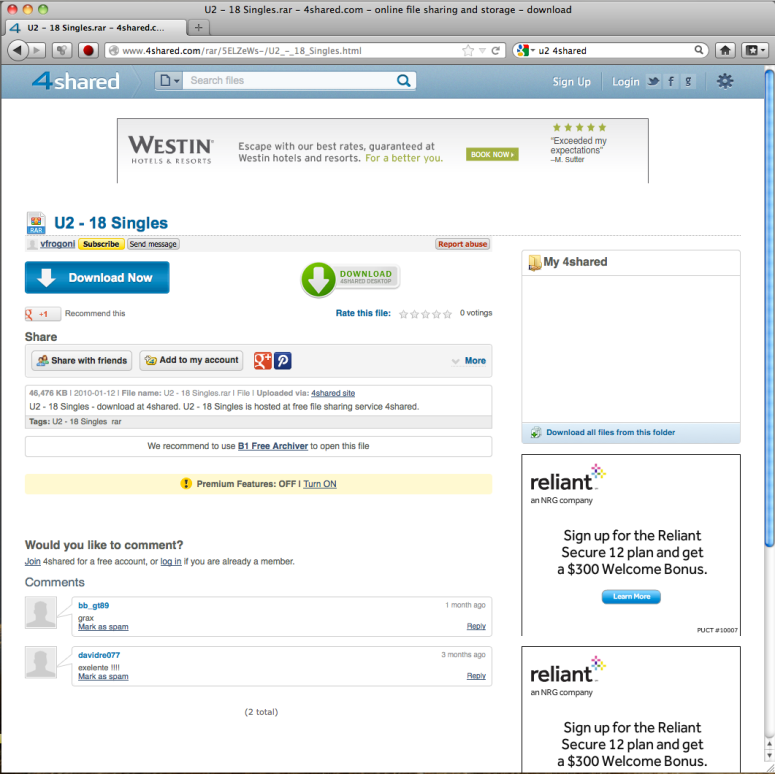 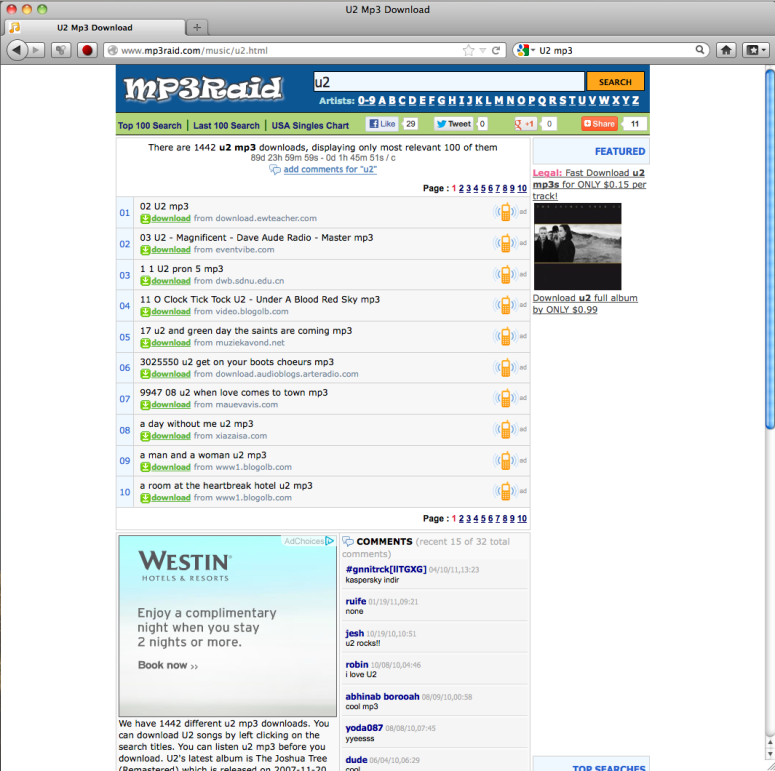 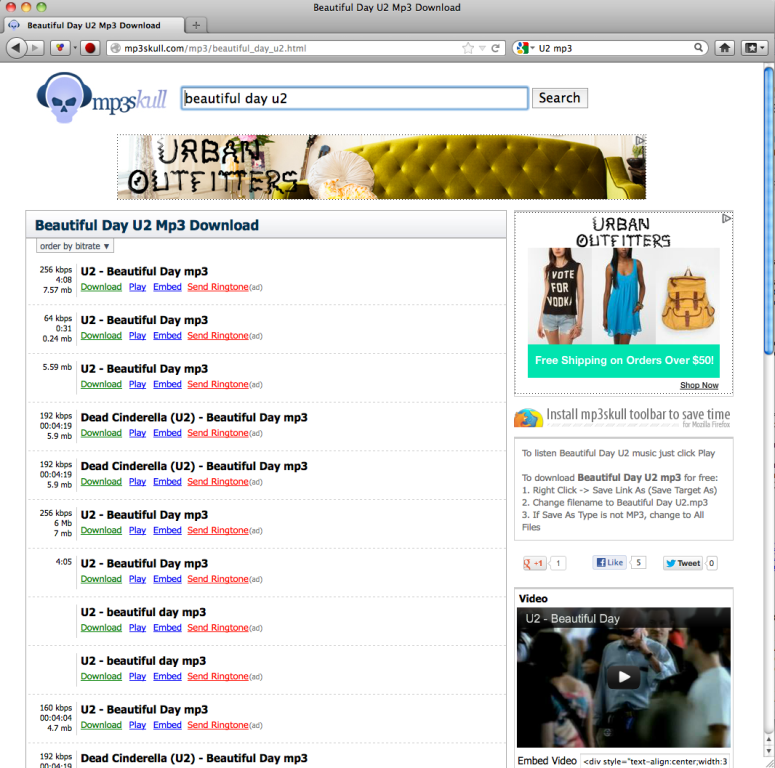 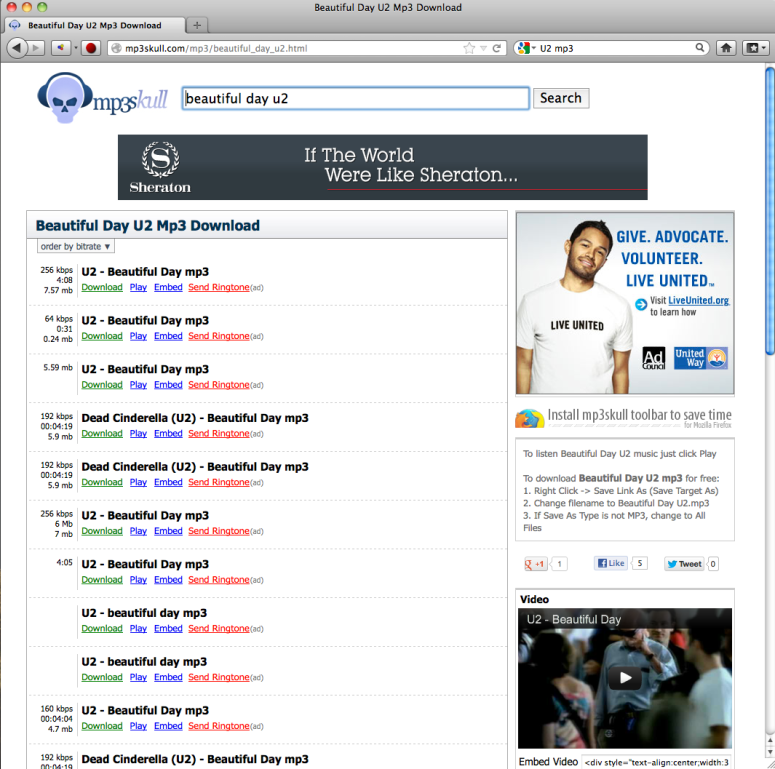 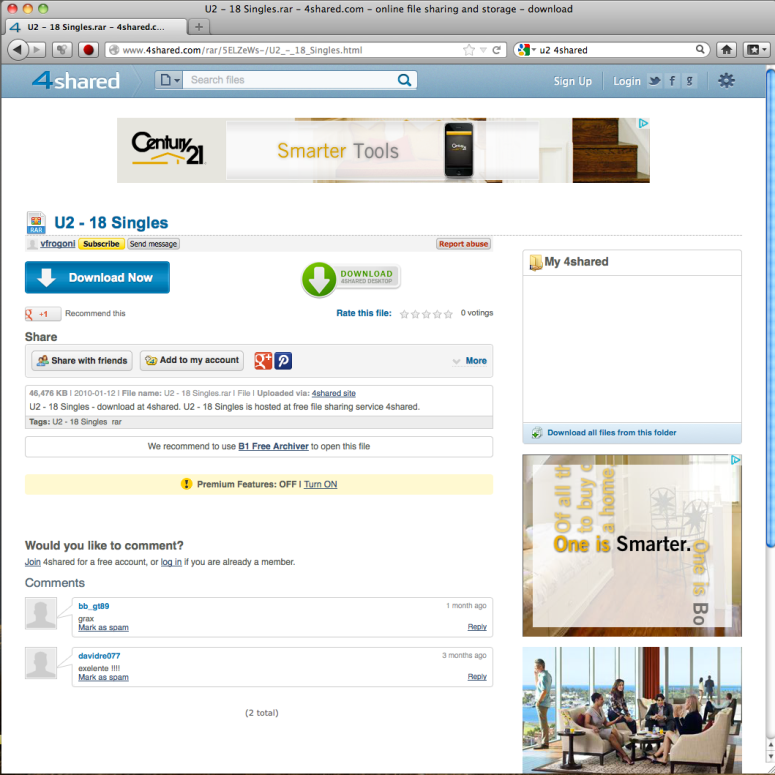 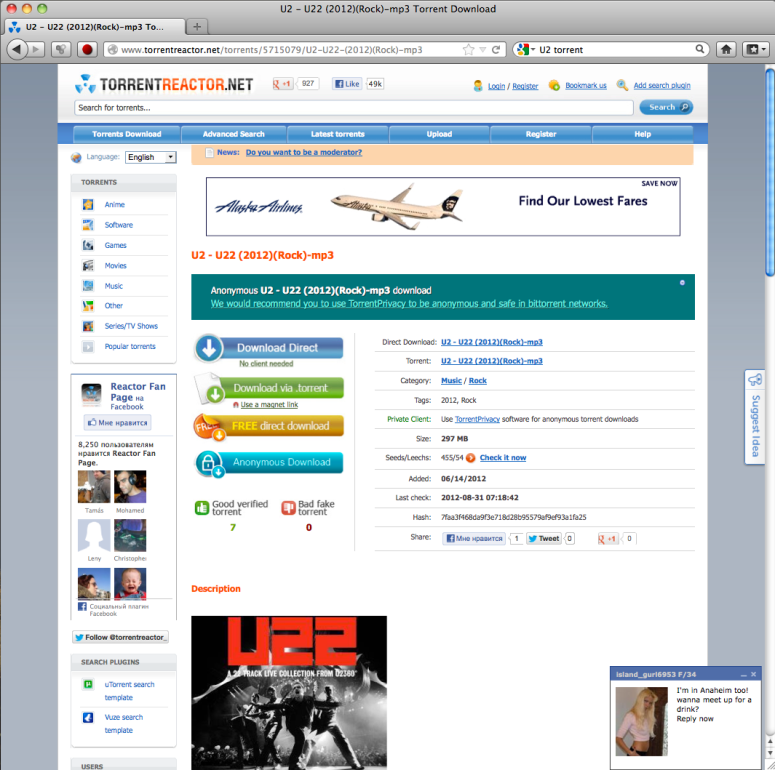 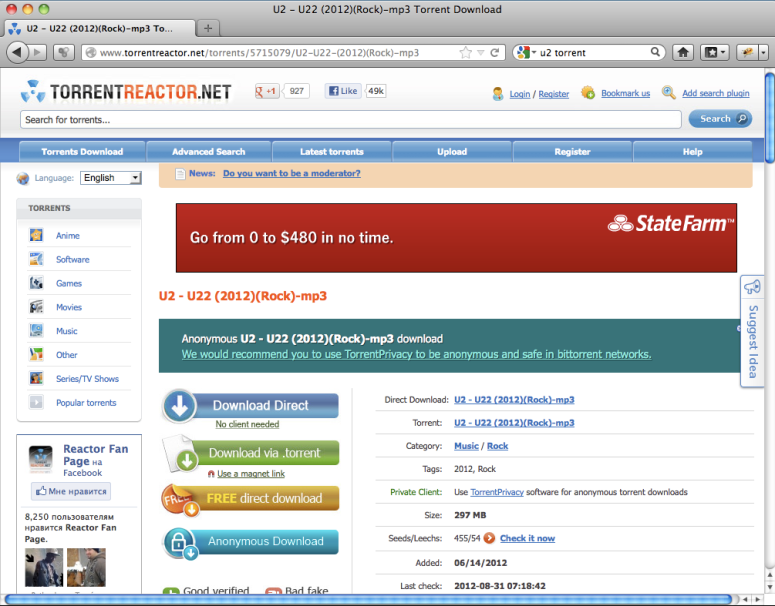 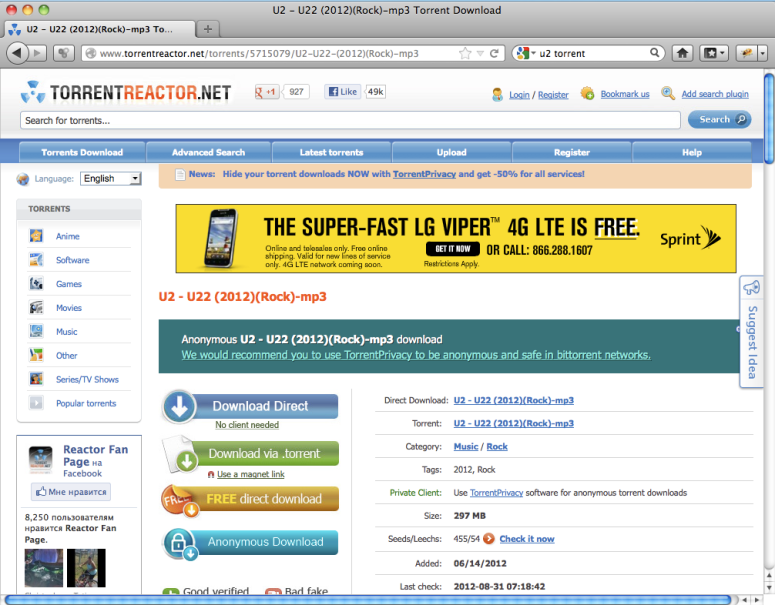 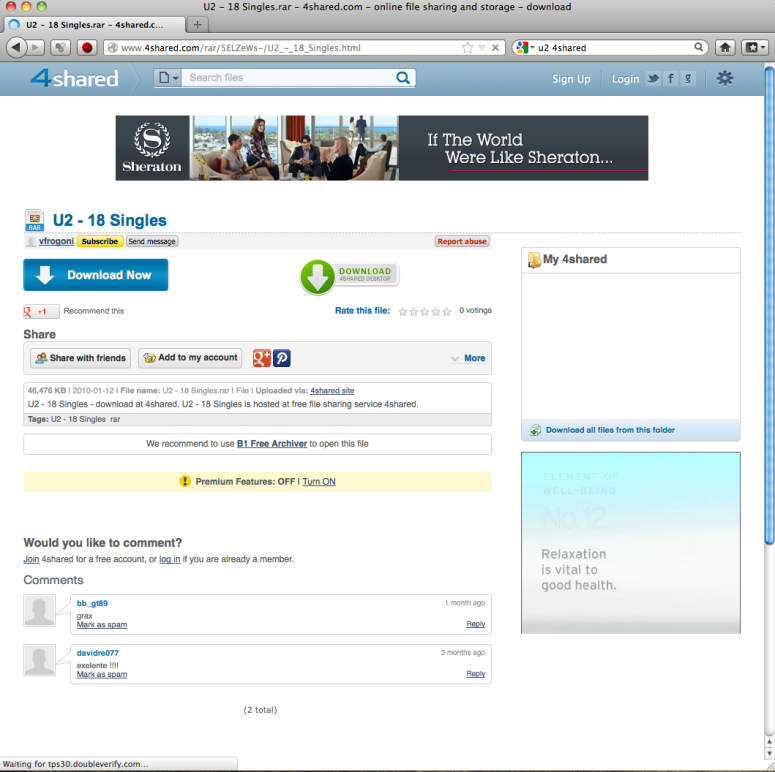 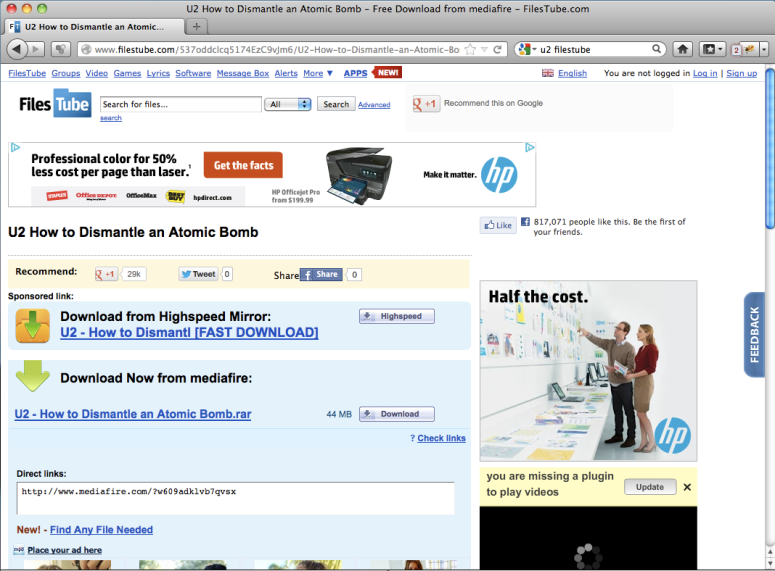 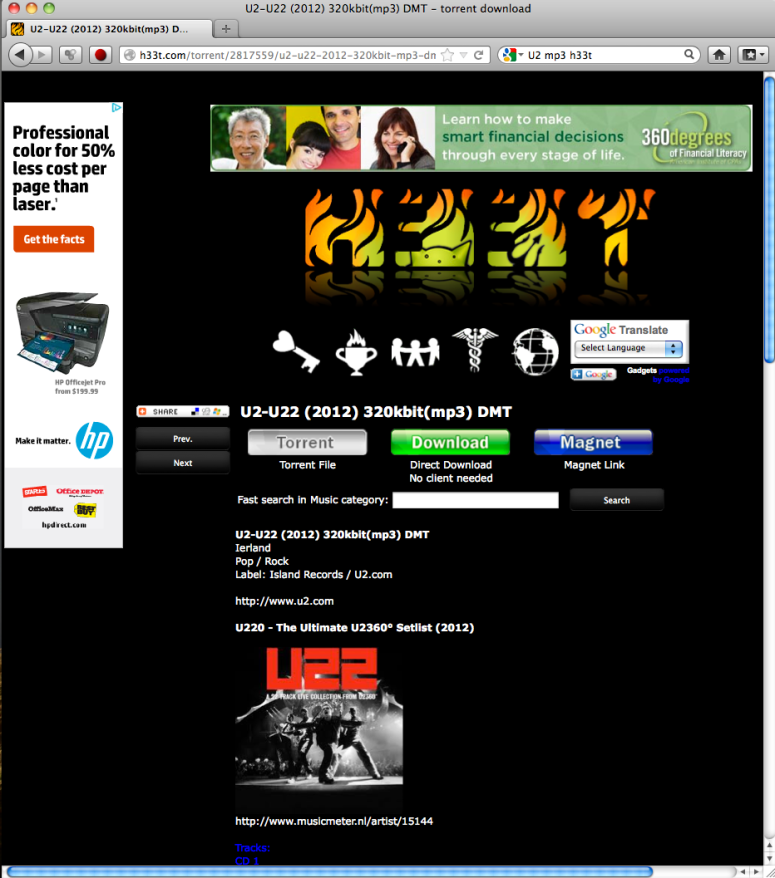 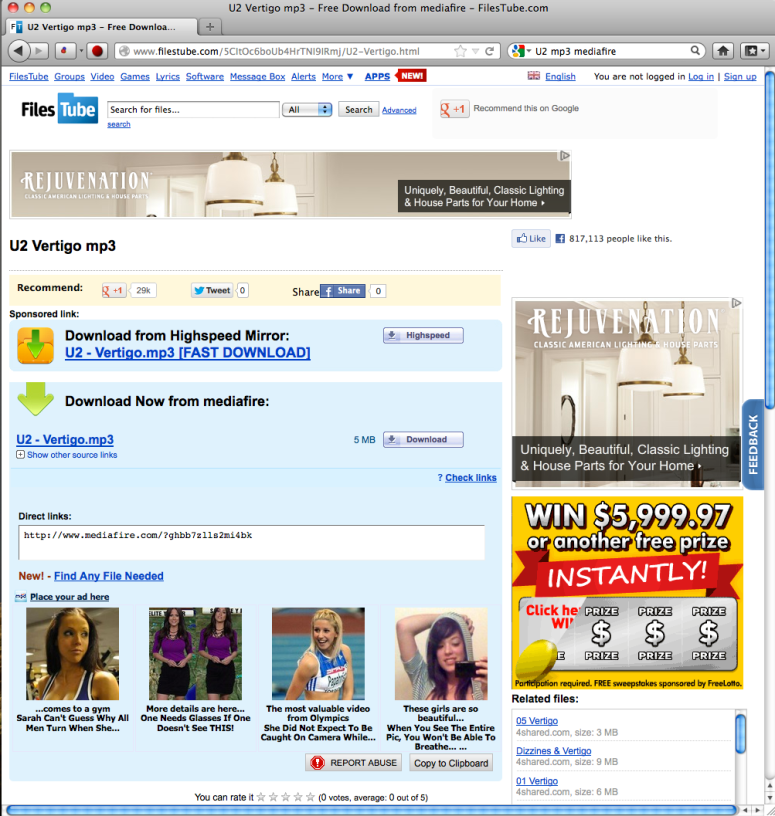 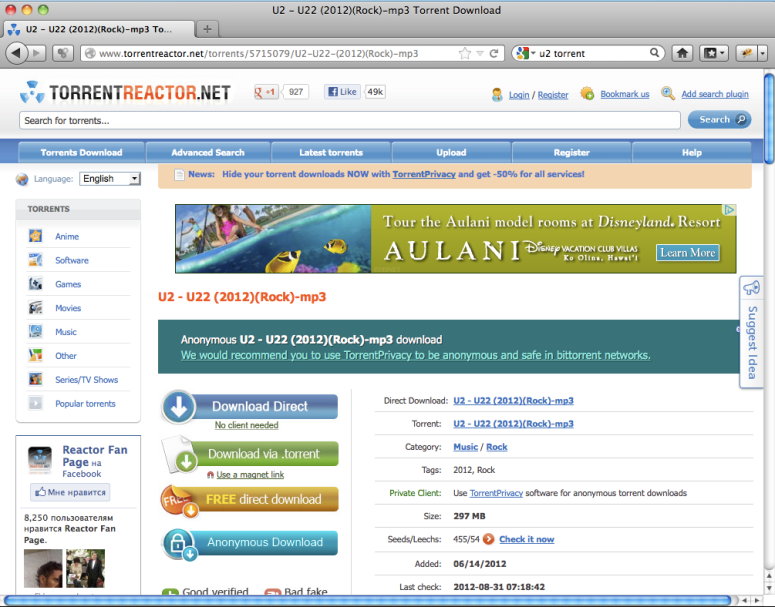 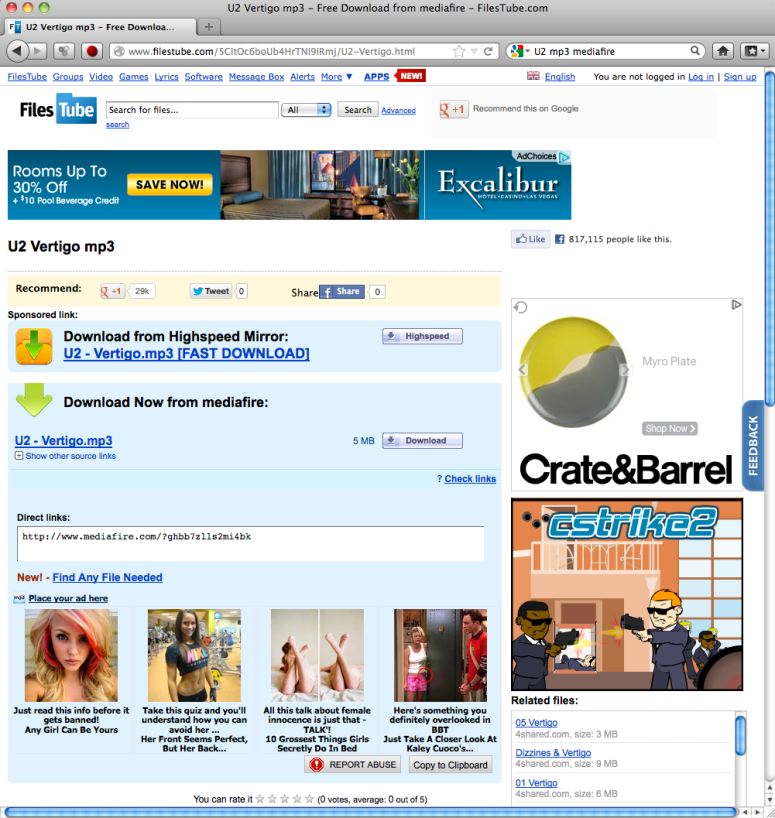 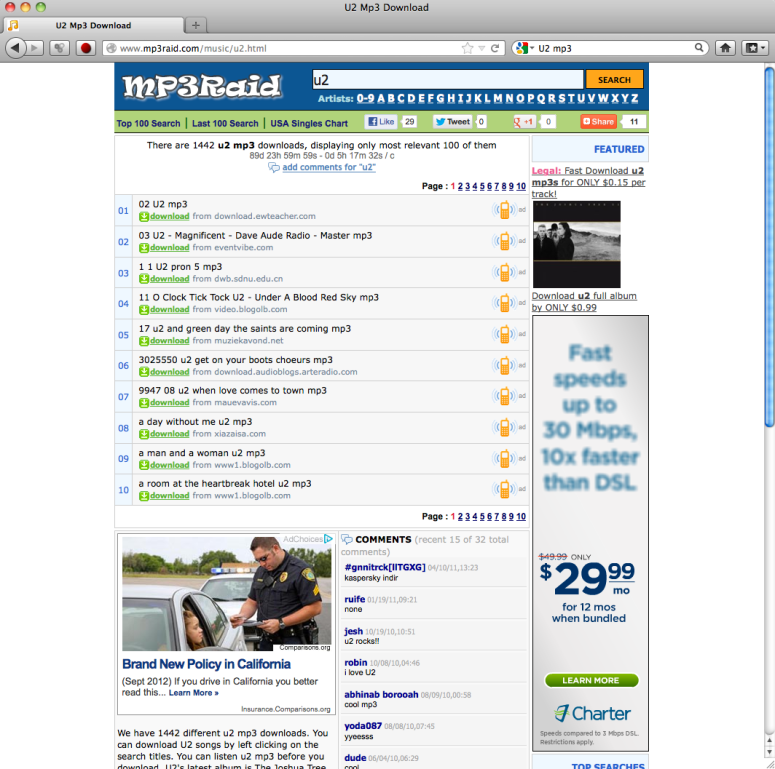 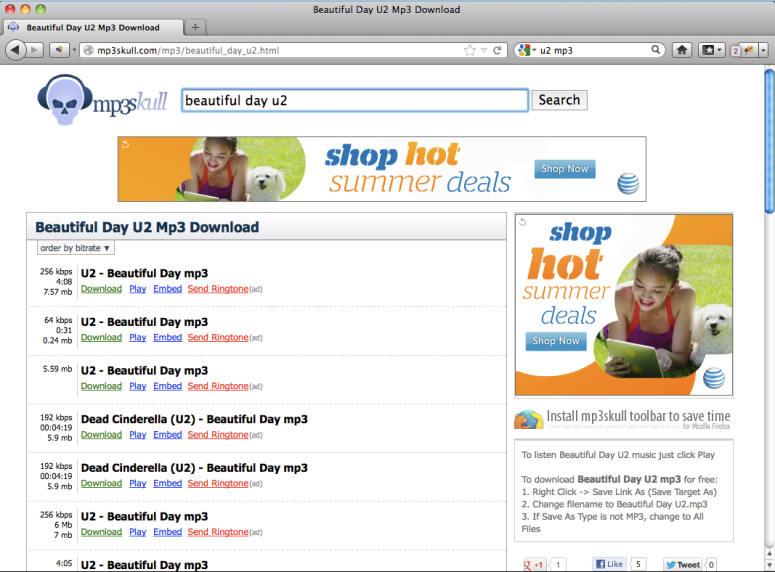 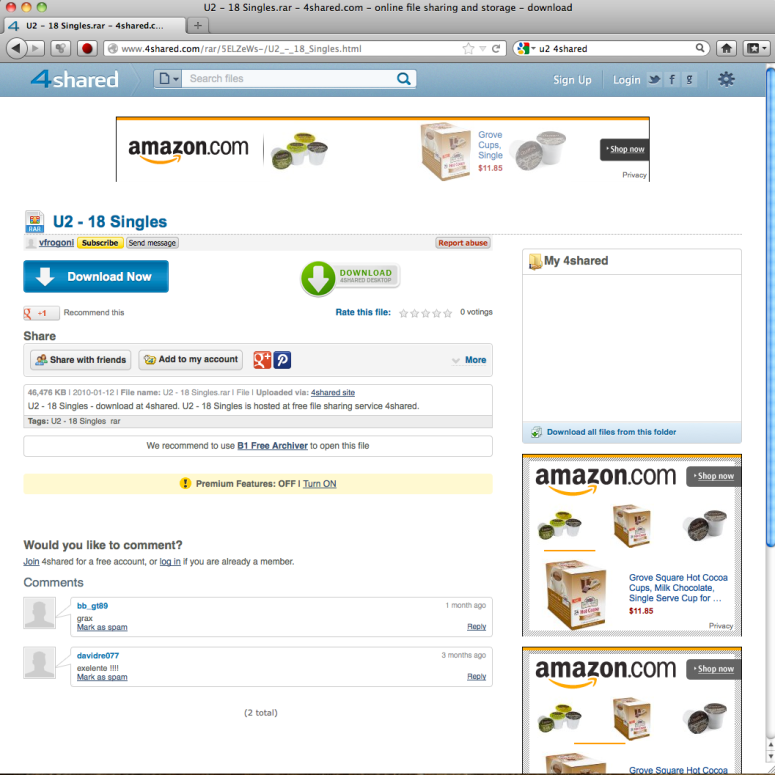