We’ve been posting about advertising on illegal lyric sites and it has become apparent that these sites are pretty clearly direct infringers–meaning they don’t get safe harbors.  This is because all seem to directly copy the lyrics themselves.

It’s also very apparent that the sites are based in China and other locations outside of US law.  Yet–of course–they all prattle on about how they respect the “DMCA” as though US law applied to them wherever they are located and that they are entitled to the “DMCA” safe harbors, which they pretty clearly are not.

Plus, these sites sell a ton of advertising, have referrals for spyware and illegal ring tones, link to artist videos on YouTube,and both the sites and the advertisers free ride off of the brand identity of artists and songwriters whose lyrics are stolen.  This advertising is not only from US companies, but is mostly from Fortune 500 companies like McDonalds, Macy’s, Levi’s and CVS Pharmacies.  Do these companies care so little about artists and songwriters that they are willing to associate their brands with unlicensed lyric sites?

Unfortunately, we have also seen several instances of legitimate artist ads being served to pirate sites such as this Brandi Carlisle ad (below on the right) served to an the Lyrics007.com illegal lyric site.  This ad for Brandi Carlisle’s new album is served next to Maroon 5 lyrics and a click through ad to a spyware toolbar that attracts users with the hope of acquiring more “free” mp3s–and we all know what “free” means.

The Brandi Carlisle ad is served by Google’s “AdChoices” adserving network and we saw many that were served by Doubleclick.  (In case you missed it, “AdChoices” used to be called “Ads by Google” but was changed during the SOPA debate for some unknown reason.)

And the answer to how in the world does a record company’s ad show up on an illegal lyric site probably lies with the adserving network.  That ad network–Google in this case–knows where the ad inventory exists, but won’t tell the advertiser where their brand is being promoted.  So you get these incongruous pairings.

And then there is another legitimate ad for the Warped Tour served next to illegal lyrics for Arcade Fire as well as Google AdChoices sponsored links for Google Chrome and what appears to be a pirate mp3 download application (more likely spyware but we didn’t want to find out) as well as some other bogus looking stuff. 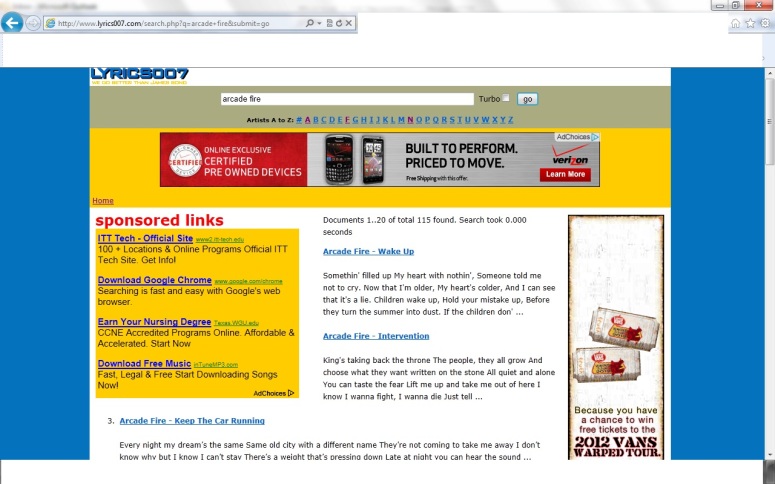 So what can you do as the artist or the artist’s negotiator?  Tell your lawyer or manager that you require in your record deal or tour contract that your name and brand cannot be used in advertising served to illegal sites.  You can even list examples of the sites.  In your tour contract, require that the tour not advertise on pirate sites and give examples.  There may be some advertising networks that are so corrupt that they shouldn’t be used at all.

Don’t stop there–also require that the tour obligate sponsors (or their ad agencies) to not advertise on pirate sites.

Before you throw up your hands and say “forget it, they’ll never agree to that” remember–artists didn’t used to get approval over singles, approval over the use of their music in commercials, or in political ads.   Now it’s pretty routine.

You don’t get if you don’t ask.

[ WHY ARENT MORE MUSICIANS WORKING ] [ ARTISTS FOR AN ETHICAL INTERNET ]

8 thoughts on “The Wall of Shame Continues: Tell Them If You Do Not Want Your Records and Tours Advertised on Pirate Sites–no @mcdonalds for you”