Music industry exec and blogger Jay Frank commented on our post BUT SPOTIFY IS PAYING 70% OF GROSS TO ARTISTS, ISN’T THAT FAIR? NO, AND HERE’S WHY…. Jay’s comment is typical of the thinking that has landed the record industry where it is today (losing money and in trouble).

It’s hard to tell from the comment whether Jay actually believes what he’s saying in the same way someone who bought a million dollar house with no money down, on a zero percent, 5 year ARM convinced themselves there was no housing bubble…

If they [Spotify] go from 10m to 100m free users, they’ll be able to charge much larger premium rates, and may even strike deals with some acts. That could easily result in $1b in artist royalties, given some other media models. This now puts Spotify at $3.5b in artist royalties per year. Pretty good.

To your point, though, that’s still half of the $7b number you put out there.

Right, no kidding “that’s still half of the $7b number”. To be fair to Jay, you should read his whole comment in context at the link above.

However, by his own admission he is still coming up short by $3.5b. If you factor that in with the analysis of the projected revenue losses from YouTube’s Music Key that’s another estimated $2.3b in the hole. But the simple truth is much easier to see, revenue keeps dropping as it has for the past 13 years while piracy apologists and digital music snake oil salesmen have yet to show any increase in actual overall net revenue from recorded music sales.

By Jay’s logic, digital albums would sell for one dollar not ten while digital song downloads would be priced at ten cents and not one dollar. That’s not the case for good reason and illustrates quickly and effectively why Spotify paying 70% of gross is moot. We don’t think labels would agree to getting paid 70% on one dollar album albums and ten cent songs. Of course the labels don’t have 18% equity in Itunes either…

The larger truth and common sense is that Spotify economics don’t work in the same way $1 album downloads and $.10 song downloads don’t work – there’s not enough scale to make the economics sustainable. If Jay truly thinks you can more than double the revenue from transactional downloads by reducing the price by 90% we’ve got a bridge in Brooklyn we’d like to sell him very cheap.

To your point, though, that’s still half of the $7b number you put out there. True, but that presumes that Spotify is the only player in town. While they may be a major force, there will also be other internet radio, satellite radio, video streaming, other streaming competitors and probably still physical and digital retail sales. Add to that greater ubiquity in tracking usage with increasing penetration of smart mobile devices combined with declining mobile data cost…and I feel like we’re starting to approach $10b a year.

And that’s just the U.S.

Tell us again about this strategy of “waiting for scale.” Spotify is Three Million Paid… Three… Oh, and that’s just the U.S.

Hey, it’s just math… but in the meantime Jay, you may want to look at this:

A Detailed Explanation on Why Streaming Has Failed… | Digital Music News
http://www.digitalmusicnews.com/permalink/2014/10/02/detailed-explanation-streaming-failed

You can email Paul Resnikoff at paul@digitalmusicnews.com 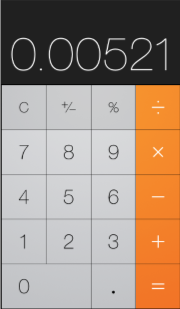 Music Streaming Math, Can It All Add Up?

4 thoughts on “Jay Frank’s Magical Mystery Streaming Math… Or, Brotha Can Ya Spare A Calculator?”