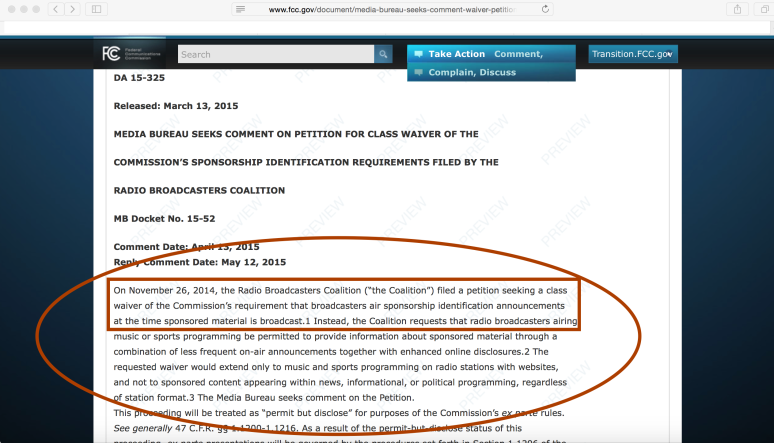 As David said in his post FCC Payola Lanes: Big Broadcasters ask FCC for Payola Waiver, Clear Channel and other NAB radio gigantamo chains have asked the FCC for a “waiver” on the FCC’s payola rules.  What’s interesting about this is the filing date, November 26, 2014.

What else happened on November 26?  One thing is that NPR reporter Laura Sydell posted “Pandora’s New Deal: Different Pay, Different Play“.  Laura Sydell quoted David alongside Georgetown professor Jim Burger and Pandora CEO Brian McAndrews all on the subject of whether Pandora’s “steering” deal with Merlin labels is payola and whether the FCC’s payola rules apply to Pandora.  This would be based on Pandora being the only pureplay webcaster to at least try to become an FCC licensed broadcaster.  (We’re not really sure where that application is at, but if you do, please comment with a reference.)

Was Sydell’s post the first time the payola issue has come up in the context of steering or promotion in direct deals between broadcasters and labels?  Of course not, it’s come up repeatedly.  But it was the first time that we know of that it came up in the context of Pandora and especially in the context of Pandora’s “Chris Harrison special” that they are trying to run in the current rate court as Sydell reports (and as was later confirmed in Billboard’s (admittedly skeptical) reporting about the similarities between the Pandora and DMX licensing strategies.  Harrison worked at DMX before Pandora–see DMX’s chest-beating press release trumpeting its defeat of songwriters).

Not to get too tin foil hat about it all, but it is very coincidental that an NPR reporter starts asking about payola and then the NAB quietly asks the FCC to give them a waiver.

If the FCC rules in the broadcaster’s favor, that could also apply to Pandora’s purchase of South Dakota radio station KXMZ-FM.

And maybe to Pandora itself.