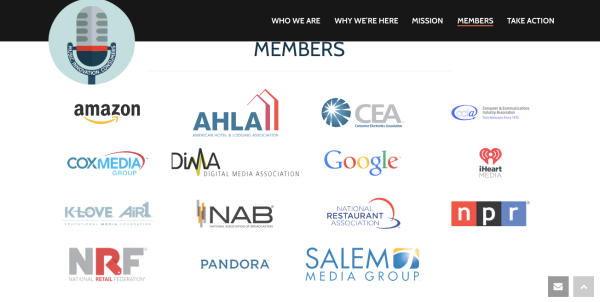 Gee this wasn’t coordinated at all. Two new Astroturf (squared) organizations in two days (with possibly the same web designer?)  The day after the announcement of the the new ReCreateCoalition, an AstroTurf organization composed almost exclusively of Google connected Astroturf organizations,   some of the same companies plus The National Association of Broadcasters, I Heart Media (Clear Channel)  Pandora and NPR have announced the creation of the MIC-Coalition in order to lobby AGAINST fair digital royalties to artists; AGAINST terrestrial royalty for performers,  and to keep songwriters under the oppressive and unconstitutional DOJ consent decrees.  Read the website it’s unbelievable.   Why the hell did NPR join?

Does NPR really want to have this fight with artists? Cause we are ready.

NPR: Do you think it’s fair that the US is one of the only industrialized nations to not pay performers for terrestrial broadcast?

NPR: Do you think it’s fair that ASCAP songwriters are kept under the 1941 anti-monopoly  DOJ consent decree which forces them to give special treatment to companies that look very much like monopolies  (YouTube/Google, Pandora, NAB etc)?

NPR: You realize that you get an artificially low rate from songwriters and performers right?  Largely because there is/was goodwill between us.  Do you want us to lobby the CRB to make you pay the same as everyone else? Also aren’t there still a bunch of public broadcasting haters in congress?

3 thoughts on “Will @NPR still #IRESPECTMUSIC and @allsongs After Joining Dark Side Coalition?”