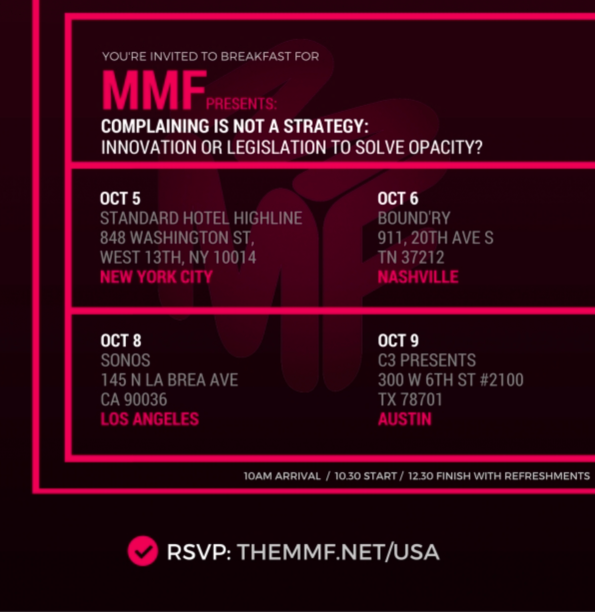 “Complaining is not a strategy?” The MMF has found its inner robber baron.  By this logic those who protested against child labour or unfair pay in the last great industrial upheaval were “complaining” and lacked “a strategy.”  The cynical implication is that the blame lies with the victim.  The weak and the poor have failed to innovate or legislate their way out of this.  Instead they just “complain.”     Sad, the once great MMF/FAC is now simply a mouthpiece for the robber barons of  the 21st century.  Much the way the Hearst family owned news papers apparently the streaming industry funds these forums now (see: https://thetrichordist.com/2015/06/30/breaking-source-claims-spotify-google-fund-independent-music-managers-forum-and-featured-artist-coalition/)

Here are some of the “balanced” and “informative” comments from panelists at the NY forum:

“Spotify is the best product ever.”
“It’s so frustrating that artists don’t understand [how great Spotify is].”
“It’d be a shame if sensationalized media stories about low royalty payments stopped people from subscribing to streaming services like Spotify, which is so awesome.”

In NY at least Tommy Silverman was honest about what is really going on. Our sources reports Silverman said “The question is will artists be willing to take a short term loss for long term gain.”  That’s right.  Artists are currently subsidizing these services with below market rates on their songs and recordings.  The problem is there is no reward for our risk taken.  There is nothing for us “in the long term.”  As we have demonstrated streaming rates are actually trending lower. And unlike many managers we didn’t end up with equity in Spotify.  This is one of the reasons we can’t wait for the Spotify IPO.  We believe that the disclosure of ownership shares may cause some legal trouble for certain individuals.

Here is Blake Morgan’s report on the goings on at the NY meetings.   BTW you still have time to show up at the Austin meeting(hint hint).

One thought on ““Complaining is not a Strategy:” The MMF Tour Blames the Victims on Streaming”