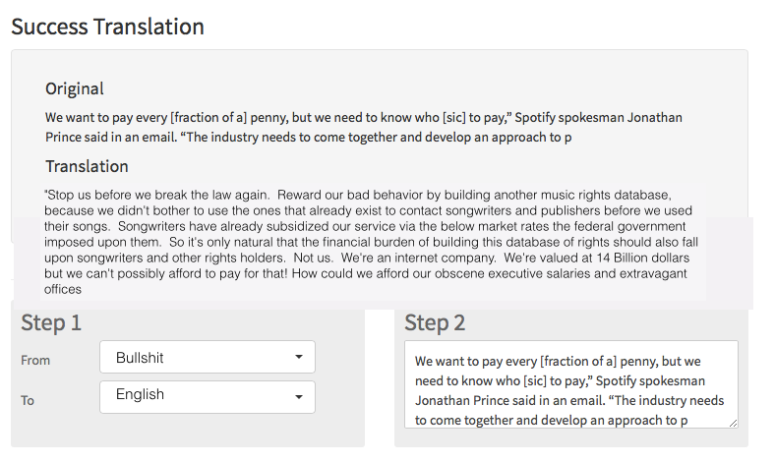 Spotify has put quite an interesting  spin on its failure to license or pay on as much as 25% of the songs on its service. Quoting from the Wall Street Journal

We want to pay every [fraction of a] penny, but we need to know who [sic] to pay,” Spotify spokesman Jonathan Prince said in an email. “The industry needs to come together and develop an approach to publishing rights based on transparency and accountability.”

Let’s put that through the BabelFish bullshit to English translator:

“Stop us before we break the law again.  Reward our bad behavior by building another music rights database, even though we didn’t bother to use the already existing databases to contact songwriters and publishers before we used their songs.  Songwriters have already subsidized our service via the below market rates the federal government imposed upon them.  So it’s only natural that the financial burden of building this database of rights should also fall upon songwriters and other rights holders.  Not us.  We’re an internet company!  We’re valued at 14 Billion dollars. We throw fabulous parties, pay obscene executive salaries and rent extravagant offices. We’re too busy changing the world to bother getting licenses from pesky songwriters!  Who needs them?

You see, instead of following legally required procedures under the copyright act Spotify went ahead and used many songs without obtaining licenses. We know this because if they had filed the required “Notices of Intent” or obtained direct licenses they would know who to pay.   Further as Victory Records, Audiam and I have pointed out they have compounded their problems, civil and criminal (state unclaimed property laws?)  by failing to account and pay rights holders or publicly disclose unclaimed funds as required by many states.

If you want to read more on the Spotify Songwriter Royalty Crisis,  check out these excellent pieces by Chris Castle:

3 thoughts on “Spotify Broke the Law on Songwriter Licenses, Therefore Rights Holders Have to Build another Database?”