<publicity images of Bridy and Butler”hot linked” from UVA and Stanford servers were deleted after Bridy and Butler expressed displeasure with the article and use of images. >

In defending the questionable dismissal of Maria Pallante as Register of Copyrights are copyleft academics Brandon Butler and Annemarie Bridy actually bolstering the case for action against Dr Hayden the Librarian of Congress for retaliatory constructive termination?

If you weren’t aware the newly appointed Librarian of Congress “reassigned” Maria Pallante the Register of Copyrights to a ambiguous new position that included “point of sales” at the Library gift shop.   This was a major screw up by the new Librarian Dr. Hayden. You see, if instead of firing someone for cause, you instead assign them to a new position well beneath their status, secretly hoping they will quit, this is generally termed “constructive termination.”  Constructive termination is a kind of wrongful termination and it is conceivable that the LOC could be investigated or hit with some sort of lawsuit.

Read more on the dismissal and Google angle here:

“Maria Pallante served for more than five years as the U.S. register of copyrights, a division of the Library of Congress. Two weeks ago Ms. Pallante was reshuffled to an advisory post for “digital strategy” she never sought, a job that included expanding the library gift shop. Three days later she resigned in a letter to the Librarian of Congress, Carla Hayden, who had been sworn in mere weeks earlier. What happened?”

@wsj: A Copyright Coup in Washington: The new Librarian of Congress ousts a federal copyright defender [Congress should investigate]

Recently we noticed a couple of remarkably similar pieces defending the actions of Dr. Hayden.

One is from law professor Annemarie Bridy who is a fellow at the Google-funded Stanford Center for the Internet and Society.   Here she makes an “uniformed guess” as to why Hayden may have justly terminated Pallante.

“The new librarian of Congress, Carla Hayden, made a rational executive decision to protect the structural integrity of her organization in the face of a fairly brazen internal challenge…When she arrived on the job, she was confronted with the uncomfortable fact that the director of a major unit within her organization — the Copyright Office — was in the process of actively trying to withdraw that unit from the organization, of which it has been a part since 1897. During her tenure, Pallante made no secret of her displeasure at having the Copyright Office operate under the umbrella of the Library of Congress.”

There are two major problems with Bridy’s statement.   First, if Hayden had cause to terminate Pallante why did she resort to reassigning her to a demeaning position?   Isn’t Bridy  actually bolstering the argument that this was constructive termination?  Second,  Bridy correctly notes that Pallante’s insubordination (proposal to move the Copyright Office out of Library of Congress) occurred under the previous Librarian of Congress, not under Hayden.  However Bridy conveniently ignores the fact that the proposal to move the Copyright Office out of the Library of Congress was floated with the blessing of the previous Librarian of Congress.   So Pallante wasn’t behaving in an insubordinate manner by doing this was she?   Her actions only became problematic ex post facto, that is when Dr Hayden arrived.   Bridy seems to imply that Hayden came into the library predisposed to firing Pallante who had done nothing wrong.  The problematic attitude and actions seems to rest with the Librarian of Congress not with Pallante.   Again this bolsters the case for constructive termination.

Then there is this guy:  Brandon Butler the Library of the University of Virginia First Director of Information Policy (hmm wonder who ponied up money for the creation of a new position?).  Butler was formerly at the Google-funded American Research Libraries.  Not necessarily all a bad bunch but definitely part of the “do gooder” copyleft that doesn’t seem to realize they are further enriching the $400 billion Google at the expense of creators by further expanding fair use. More troubling is Butler’s close association with Jonathan Band a lobbyist and a named member of the Oracle v. Google  Shill list.

Some of Band’s humility seems to have worn off on young Brandon:

“We Jeffersonians know better. Copyright is not a natural right, entitled to protection at the expense of the public good.”

That’s right, this DC  elite now  a carpet bagging  UVA “Jeffersonian” has apparently been appointed to decide what is in the public interest and we lowly creators can just settle for table scraps.

And <sigh> once again: Jefferson has nothing to do with the copyright clause. James Madison and Charles Pinckney were the authors of the copyright clause.  Further the “committee on detail” were given a choice and selected Madison’s more “natural right” phrasing and not his more “government grant economic license” phrasing.  It’s not a perfect argument, but certainly one is on more stable ground when arguing for a “natural rights” interpretation of constitutional copyright than otherwise.  Mr Butler and his fellow Jeffersonians in fact do not “know better” and it’s a shame that an at best moderately successful indie rocker is the only one pointing this out to the UVA  Library Director of Information Policy.

Forget “fake news”  this is fake history with a corporate friendly agenda from a high ranking employee at one of our most revered public institutions. Who’s doing the hiring over there? 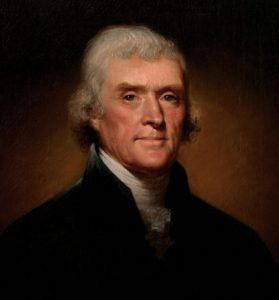 Jefferson:  “Dude, I didn’t have shit to do with the copyright clause.  I was partying in France. Well, mostly France,  one time me and a bunch of other Cavaliers went up to The Bulldog in Amsterdam! I got so fucked up I barely remember anything. I may have like invented the Dutch beer bike! I was that wasted!”

But I digress.  Let’s look at what our Google chum and  “Jeffersonian” young overlord has to say about the retaliatory constructive termination of Pallante:

“I don’t have access to any insider info, but I don’t think I need it: former Register Maria Pallante didn’t think she should be working for the Library. The Librarian apparently agreed. The end.”

This is a remarkable simplification that leaves out (once again) the  fact that Pallante proposed moving the Copyright Office with the blessings of the former librarian.  But let’s take this statement at face value. Butler suggests that the Librarian knew that by reassigning Pallante from Copyright Office to working directly for the Librarian overseeing “point of sales” (and a questionably legal “orphan works” project) Pallante would resign.  In other words assigning Pallante directly to the library produced the intended resignation. That is the very definition of retaliatory constructive termination.  You sure you want to defend the Librarian in this manner?

For this reason The Judiciary Committee should investigate the reassignment.   And If I were Pallante I’d sue the librarian. But that’s just me.

(If you want to encourage the House Judiciary Subcommittee on Intellectual Property to look into this “retaliatory constructive termination”  matter that would be helpful.  I suggest a polite and respectful note to your favorite representative on the committee. Remember many of these representatives are quite sympathetic to authors. Contact here .   Also support their proposal to have congress not Librarian appoint the next Register).

But before we wrap this up let’s just look at one more thing that our elite “Jeffersonian” seems to be directing at me. It reads as a threat:

“The Librarian of Congress is a tough lady; as her city erupted after the death of Freddie Gray, Hayden supported her staff’s impulse to open the doors of the Enoch Pratt Free Library to create a safe space for folks to gather, talk, and heal. She doesn’t seem like someone you can bully, and suggesting she’s a puppet for Google or George Soros or whomever is maybe not the way to her heart.She has an opportunity to choose a Register that serves all of us, and I hope she will. “

As far as I know, I’m the only one who has pointed out her connections to George Soros.  Her connections to Google are well known and well reported.   So I’m gonna assume this is directed at me.   So basically what Butler is saying is: If I don’t keep my mouth shut they are gonna appoint a register that will go against the rights of authors. So I’d like to address Butler directly.

Bring it on dude.

First, if an individual blogger calling a powerful public servant to account for actions that appear to benefit crony capitalists is a form of “bullying” then we should just wrap up this entire experiment in democracy and freedom of speech and go back to our caves.

Second, the tone is clearly authoritarian.  Last I checked the Librarian of Congress works for the people.  Now maybe you “Jeffersonians” haven’t noticed but the populace has taken a very Jacksonian turn. On both the left and the right.   They are in no mood to be governed by elites who hand down edicts that benefit a tax avoiding, privacy violating, government corrupting multibillion dollar corporation like Google. There are millions of songwriters and authors who feel quite Jacksonian at the moment. Maybe we should just get rid of the Library of Congress?  It seems like an anachronism in this day and age. Don’t we already have the internet?   Put those old maps in one of the Smithsonian buildings.

Third, the Librarian has already pissed off members of the Judiciary committee with her handling of  Pallante.  The  Librarian by law answers to congress.   So nothing would help the cause of authors more than the LOC appointing a copyleft register of copyrights.  Can you imagine how quickly we’d be able to get her in front of a committee or two?   Think those pesky FOIA laws are bad?  Wait until the US Congress starts subpoenaing the Librarian.  I’d suggest they start by looking for communications between Public Knowledge, DPLA, ARL, and members of Stanford’s Center for the Internet and Society.   All funded by Google. Even the UVA library may be implicated as there are connections galore between yourself  and Google. And you appear to be using UVA resources to advocate.  Hope your bosses are happy with you a year from now.

Fourth as we’ve noted elsewhere we believe that he Librarian is already in deep shit by allowing “mass NOI” filings for compulsory mechanical licenses. Too complicated to explain here but it looks wrong and possibly criminal.     Songwriters have awoken and are already suing the DOJ on constitutional and administrative grounds.  BMI’s first challenge to the Google inspired DOJ 100% licensing rule was successful.  Songwriters are pissed and there are millions of us. I can almost guarantee you that the mass NOI filings will meet a similar response.

So I’d  be careful about threatening a songwriter.  Songwriters can easily paralyze the LOC with just the the “mass NOI” issue. What if we went farther and  started a campaign asking authors, songwriters, film makers and fine artists to stop donating works to the LOC?   You know we creators give the LOC  those works right?  The LOC doesn’t have to pay for them.  We can certainly change that.