A friend that has long been involved in the technology startup world refers to any and all cryptocurrencies as “LaunderCoin.”  The point being that some significant portion of cryptocurrency activity is simply money laundering.   So it was no surprise when I saw the headline above come across my newsfeed.  Yawn.

A few paragraphs in though I nearly spit out my coffee.  This isn’t any old cryptocurrency expert this is the Ethereum Foundation’s “research scientist” Virgil Griffith.   Griffith is a well-known internet radical. The NY Times called once called him a “cult hacker.”  “Internet zealot” might be a better description.

From the press release accompanying the complaint:

“As alleged, Virgil Griffith provided highly technical information to North Korea, knowing that this information could be used to help North Korea launder money and evade sanctions.  In allegedly doing so, Griffith jeopardized the sanctions that both Congress and the president have enacted to place maximum pressure on North Korea’s dangerous regime.”

Assistant Attorney General John Demers said:  “Despite receiving warnings not to go, Griffith allegedly traveled to one of the United States’ foremost adversaries, North Korea, where he taught his audience how to use blockchain technology to evade sanctions.  By this complaint, we begin the process of seeking justice for such conduct.

So what does this have to do with the new Music Licensing Collective?  Well one of the two digital vendors announced by the MLC is ConsenSys.  ConsenSys is headed by Joseph Lublin who is the co-founder of Ethereum and COO of Ethereum Foundation. In 2014 Joseph Lubin described The Ethereum Foundation as a  Canadian non-profit that “makes sure the Ethereum infrastructure run fairly and independently.  However, a search of Canadian Government records shows no such non-profit or charity is registered in Canada under that name. 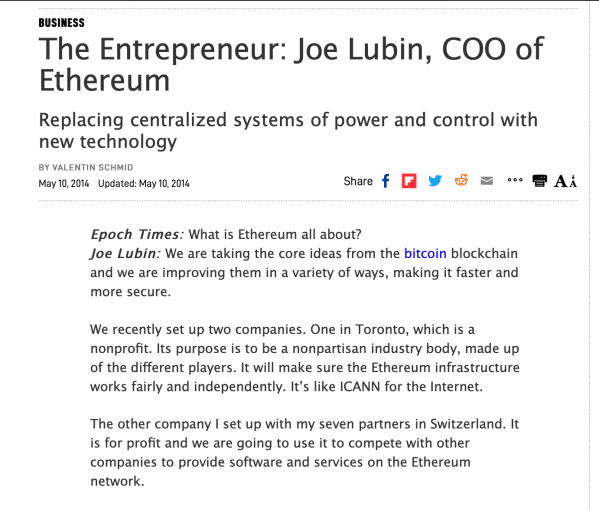 Even more confusing, the Swiss tax authorities have a non-profit Ethernet Foundation registered in Zug Switzerland where Lubin’s for-profit company is registered. And there are multiple and contradictory reports as to Lubin’s role in these various entities.

While it is unclear if Lubin or any entity that he directs is involved in the sanctions violations, he is awfully close and could be questioned.  The US attorney is hinting at further arrests. The fact is the MLC board has somehow managed to put themselves awfully close to a national security investigation.  This is outrageous.  Where were the grownups?

We need real transparency and oversight of the MLC.   It’s probably time to have the Inspector General of the Library of Congress look into the award process.   First there was HFA, now North Korea?