As many of you already know the new federal Music Licensing Collective has selected Harry Fox Agency as the vendor to provide song data to the MLC. It is rapidly becoming clear that what this really means is that the MLC will start with the HFA song database and then through a rather convoluted and manual process, songwriters will be required to “ensure the quality of that data” if they expect to get paid. In other words songwriters will do all the heavy lifting.

I’m a little confused here.  The MLC received $37 million dollars in startup costs from digital music services.  Clearly an accurate database is necessary to start up an entity designed to distribute song royalties.  So it should be a start up cost, not an after thought outsourced to songwriters. Especially after we songwriters were told over and over again that the streaming services would pay for MLC.

As an aside,  we will never know much about what the MLC spends its money on  because the whole fucking budget of the MLC has been redacted on the copyright office website.  This is not a joke.  How is this even legal?  Why the fuck is the budget secret from the songwriters/public it’s supposed to serve? You think the so-called songwriter groups represented on the various boards of the MLC would be the least bit embarrassed by this.  Apparently they aren’t. 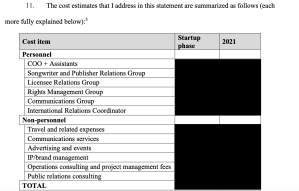 Figure 1.  MLC filing on Copyright Office website.  The entire budget is redacted in the public record.

But I digress. That’s another blog. The much bigger problem is the MLC is apparently building the database around the existing HFA database.  You know the database that got Spotify and Rhapsody sued.  This will be the MLC database. Garbage in Garbage out. This will be an unmitigated disaster.  Let me show you:

In 2019 I chose HFA to administer the mechanicals on the self-published part of my catalog.   When my team first contacted HFA they were told HFA had information for around 80 of my songs already.  Unfortunately the data was wrong.  It showed me as 100% writer on many songs that were co-written and co-published. Interesting cause at that point I’d  never been paid by HFA. And I am not sure where this information came from as at that point I had never given any splits to HFA.  I suspect ass covering because the Spotify/Rhapsody lawsuits involved this part of my catalog (HFA was vendor hired by Spotify to clear songwriter licenses and pay songwriters. They failed and the lawsuits were the result.)

Regardless my team proceeded to update the data and provided the proper splits and co-publishers to HFA.   And this is where it gets weird. We received this email from HFA.  Here is a snippet.

“For updating songs it is most efficient to process them manually, by entering specific song codes in the “Add/Update Song” section of the eSong tool. Additionally, you cannot relinquish or decrease your splits on songs in our system, as this requires an agent to do it on your behalf. I say this because it appears you have a 100% split on nearly all songs in your catalog. (Emphasis added.)

The wording is a little unclear.  But I thought that this meant I could “decrease” my share on specific songs, and have the co-writers co-publishers attributed if I went through the manual process.  So we sent a list with updated songs splits,ISWC (unique international identifier for a composition) and IPI numbers (unique international identifier for a songwriter or publisher).

I didn’t think any more of this until I had my team build a CWR file.  CWR is the most widely used international data format for song information (The MLC is not using this format for some reason).  When we created the CWR file we discovered that the HFA publisher data still did not match. Not only that it seemed to be missing important data (ISWC, IPI and ISRC) that we had provided.

Here is an example song:

Our Data (submitted in 2019 based on BMI records): 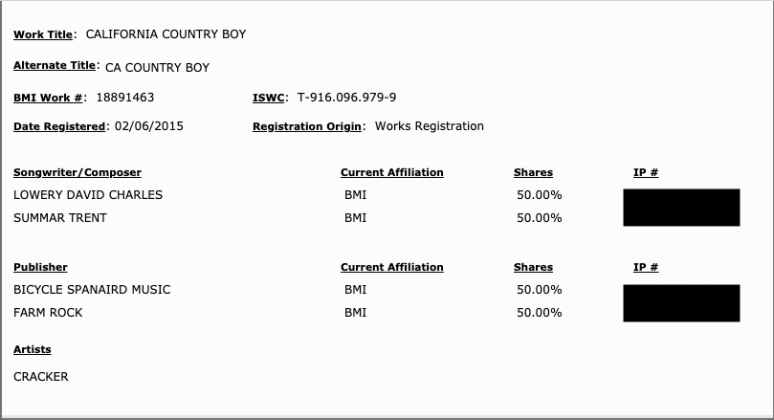 First thing we notice is that HFA is reporting that I am not an HFA registered publisher. WTF? Second problem is that Trent Summar’s publishing share (Farm Rock Music) is not listed. This has instead been assigned to “copyright control.”  It is unclear what that means. It is clear that since this song was previously mis-registered as David Lowery/Bicycle Spanaird 100%, HFA records have been updated. The co-writer has been added, but not the co-publisher. But curiously they somehow have Trent’s middle name. Now I thought perhaps this was just a deficiency in the public facing database.  So I double checked by looking up the song from my own HFA account.

Here is the (internal data) that search returned.

No IPI numbers? Well maybe those are hidden for privacy. But no ISWC number? And Farm Rock Music is still not listed as a publisher.  That is again listed as copyright control. This is really shoddy work. How is the MLC supposed to distribute royalties based on this data?

I checked an additional 25 co-written songs and the data was fucked on all of them: multiple song codes, incorrect splits, missing co-publisher information, missing ISWC codes, and some songs were just not in the HFA database.  Honestly it looks like someone never finished doing the job.

It’s possible that I or someone on my team somehow screwed this up, but it seems unlikely. I have copies of the HFA formatted excel sheets that were submitted and they are correct.  If all the self-published songwriters are in the same situation then we are likely talking about millions of songs that have bad data. This is very troubling.

“But my BMI Data is Correct.  Why Didn’t MLC Start With That Data?”

Really odd, right? The data the MLC is seeking already exists in a machine readable format at the PROs (BMI, ASCAP, SESAC etc).  Why is it that songwriters can’t simply opt in to have their data transmitted to the MLC? Wouldn’t this be the easiest way to correct the MLC database?  Instead songwriters are going to have to go through and get HFA to manually update each song.  For an average songwriter like myself, even at minimum wage that’s probably several hundred dollars worth of work. And my data is pretty organized!

The sad thing is we were told over and over again that streaming services were supposed to pay for costs of the MLC.  Why are songwriters being asked to do all this unnecessary work? Even the MLC’s official title they’ve given to the effort make songwriters clean up their mess is insulting: “Play Your Part™.”  They thought it so clever apparently they have trademarked the phrase.

The US Copyright Office should step in and look at whats happening with the MLC database.  Something is very wrong with the HFA data.

4 thoughts on “Good data in Garbage Out: The MLC/HFA Data Disaster”