Why do we expect mobile consumers to adopt Spotify premium when they can steam any song they want on YouTube mobile already? Without a subscription to Music Key?  They can do the same on SoundCloud for that matter.  Further these services pay a pittance to artists compared to Spotify.  Why aren’t artists outraged?

A survey of music consumption habits by students at a public university indicates just how tough it is for Spotify.  When asked which services they use to listen to music, clearly YouTube dominates. The not-fully-licensed SoundCloud is a respectable 4th. (Ed Note: And what’s the deal with 8tracks.com? This was not really on our radar until now.  It was a write in but had it been included in survey it would have polled at nearly 10%.)

We can also objectively conclude that Beats Music Service is DEAD. Monty Python might phrase it this way:

“This streaming service is no more. It has ceased to be. It’s expired and gone to meet its maker. This is a late streaming service. It’s a stiff. Bereft of life, it rests in peace. If it had not been purchased by Apple it would be pushing up the daisies. It’s rung down the curtain and joined the choir invisible. This is an ex-streaming service.” 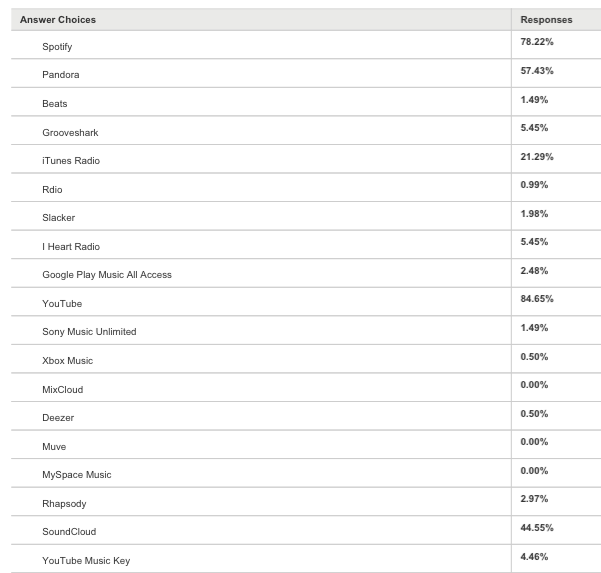 One thought on “On The Other Hand #1: Spotify Premium Must Compete With YouTube Free and SoundCloud”