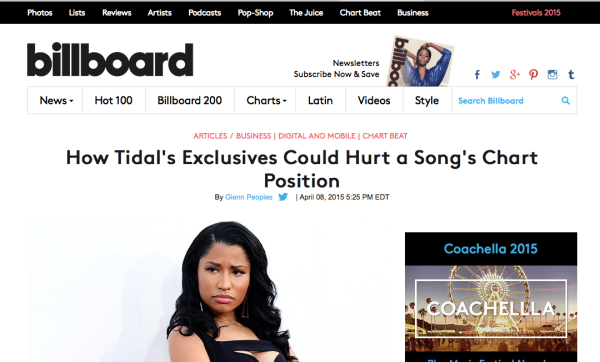 Back in November Billboard announced it would change how it’s top 200 album chart was calculated.  It reasonably added a streaming component to the calculation.  What we did not like at the time it was announced is that it essentially overweighted the streams and disfavored albums not released to the streaming services.   We were also suspicious that this was yet another subtle partisan move by Billboard to bolster incumbent streaming services like Spotify, Pandora and YouTube. Why? Well it seemed suspicious to us that Billboard’s change came  right after Taylor Swift refused to release her album on free streaming services.

Today, in a very odd article, Glenn Peoples and Billboard warned artists that releasing content exclusively with the artist owned Tidal would hurt their showing on the Billboard/Neilson Hot 100 chart.   Peoples helpfully estimates just how much lower certain artists would rank on the Billboard Hot 100.  For instance he specifically calls out Beyonce on this point noting that her single “7/11” would fall 8 places from #44 to #52.   Given that Tidal’s relaunch was the brainchild of her husband Jay Z, this seems a little like throwing down the gauntlet.   Since when is Billboard in the artist warning business?  And why start warning artists in the run up to The Billboard Music Awards?  It all seems odd.

Unless of course Billboard and Nielsen somehow have a dog in the fight.  I mean shouldn’t Billboard charts be service neutral?  Why should the charts favor (as Billboard readily admits) one streaming service over another?  Why would “The Bible of the Music Business” make it harder for upstarts that want to challenge the incumbent and dominant market players in the streaming business? Why would Billboard use it’s bully pulpit to seemingly discourage use of a particular streaming service?

We’ve noticed a very strong tilt in Billboards reporting in the last few years away from artists and towards the streaming services.  It has gotten so bad that when this blog exposed Tim Westergren’s (Pandora) donations to an anti-gay politician that Billboard immediately performed damage control for Westergren.  But this is even more disturbing.  Billboard seems to be putting a thumb on the scale here, favoring Spotify and the incumbents over Tidal.

Now I’m just speculating here,  but is there some other reason that Billboard has come out so strongly in support of certain streaming services?  Is it possible that Billboard has developed financial relationships with these companies? And if they have, wouldn’t this make them complicit in anti-competitive behavior by the incumbent streaming services?  Seems to me that someone should look into this.

But what do I know? I’m just a dumb artist.