Just think about this.

This document was scanned 13 days ago?!  If The Verge scanned this document why did they wait so long to “break” the story?

So it seems likely The Verge did not scan this contract and this is the original leak.

Only two parties had access to this agreement before The Verge got a copy:   Spotify and Sony.

Sony clearly does not benefit from the leak. This is a disaster for Sony. Now it could be a disgruntled employee.  But it would have to be quite a high level employee to have access to this contract.  My understanding is that contracts like this are stored in highly secure locations.

My bet is on Spotify.  Why? Because they benefit from this leak in two ways:

1) It helps Spotify with their complaint to EU against Apple and major record labels over the new Apple streaming service. Especially the disclosures about “Most Favored Nations” clauses, which UMG is forbidden to use.

2) The leak happened a day before Spotify’s big press event announcing new partnerships.   This event was coincidentally live streamed by The Verge.  (hmm….was The Verge in on it?)

But my speculation doesn’t really matter.  Both Spotify and Sony could review their internal network traffic.  They probably already have.  It’s a simple question who was using a Canon imageRUNNER ADVANCE C5051 at 10:41:36 Am on May 7th 2015? Who was using the Cannon iR-ADV C5051 App on a relatively new Mac?   Does Sony even use Macs?

Sony already knows whether this was an internal leak or if Spotify leaked it.

Things are about to get very, very interesting. 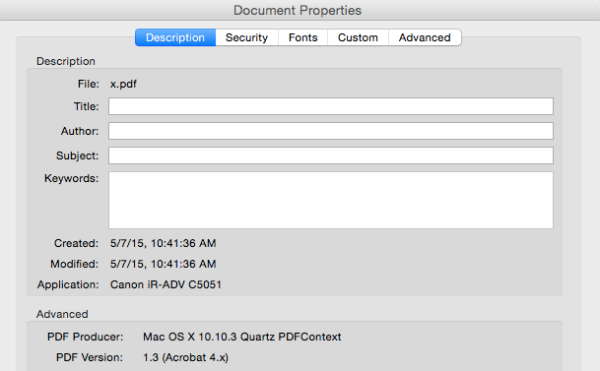 4 thoughts on “Did Spotify Leak Their Own Contract With Sony?”