July 15 2015 Screen capture from YouTube video by hate rock band Kill Baby Kill which depicts  skinheads killing and burning non-white immigrants.  These channels and playlists are at this very moment being used by violent groups to recruit new members.

In the wake of the “resignation” of Reddit’s CEO Ellen Pao much has been written about the violently misogynist and racist views expressed on some especially sickening subreddits.   Sam Biddle at Gawker has been particularly courageous in covering the controversy and the cesspool that is reddit.   Read him here, here, here and here.

But in the mainstream press much of the discussion quickly turns to Reddit’s failure to clean itself up and become a profit making company.   Specifically how does one attract mainstream advertisers when your site (in the name of “free speech”) permits a subreddit devoted to pictures and videos of black men being killed and allows users advocate for genocide?

I can see how that would be tough to attract advertisers like American Express and Chevrolet.

What is mystifying to me is why advertisers somehow think YouTube is any different from Reddit?   Remember the scandal back in March when CNN reported that YouTube/Google ran Aveeno and Bud Light advertisements before an ISIS video inciting violence.  This was not an isolated incident.  YouTube shares Reddit’s same absolutist (and legally wrong) conception of free speech.  YouTube is full of violent, racist and misogynist videos that often depict unspeakable cruelty.   Some may argue that there is some sort of educational or newsworthy value to the videos.  But read the comments. Look at the user names.  That is not what is going on here.

Back in 2013 I wrote an open letter to the artists that appeared on the YouTube Music Awards asking them to ask YouTube to clean up its act.   Since this letter is so similar to the complaints about Reddit I thought we should re-run this story.  It is posted below.

11/07/2013
This is not about whether the YouTube Music Awards were a train wreck or not.  I’m not going to criticize the overall quality of the show’s production.  Live shows are tough.  I’m a performer, I know.   I’ll leave the criticism or praise of the show itself to others.   I enjoyed the show and thought it had its moments.  It was nice the public got a vote. And hey Eminem even got an award for an album that wasn’t out yet!

This is not a pile on.  This is about something entirely different.

This is about otherwise sensible and decent artists who I LIKE AND RESPECT that seem to have been unwittingly duped into lending their credibility to a site that hosts and often directly monetizes (with advertising) videos that promote hate, animal cruelty videos, human trafficking ads, beheading videos, jihadi recruiting videos, playlists devoted to violence against women and other disgusting stuff.  This site is YouTube.

*Would artists perform on the MTV music awards if MTV broadcast hate videos from bands like Final War, Skrewdriver or Kill Baby Kill?  (That would never get past MTV’s standards and practices)

*Would an artist host the Grammys if The Recording Academy  were in the business of distributing cat kicking videos? (That would never get past CBS’s standards and practices)

*Would artists perform for a network that also had channels that seemed to be exclusively devoted to rape scenes? Real and from movies?

*And again, would artists make videos for a company that distributed a snuff film that shows a man decapitating his wife?

(Ed note: It should be noted that extreme violence,violence towards women, racism, hate, etc are all standard exclusions in artists recording and publishing agreements for licensing – and for good reason.  Why should YouTube get a pass on this?)

Now I feel confident that no artist who participated in the YouTube awards would knowingly support this kind of activity. I have to assume that they are as unaware as I was that this unspeakable stuff is on YouTube and YouTube is profiting from its repeated viewings.   If it weren’t for my University of Georgia research I would not have been aware of the extent of the problem either.

However, unlike many problems in the world, this is a problem artists can actually do something about and do some good in the process.

Assuming that YouTube does their music awards next year,  artists could do good by demanding that YouTube clean up their act before participating.  And there’s no time like the present to get started with the clean up.

Many of the videos already have graphic content disclaimers.  Someone–presumably YouTube itself or the YouTube community–has already flagged these videos, so YouTube knows what they are hosting!   I think YouTube needs to be much more proactive in cleaning up their act, and the artists who associate themselves with YouTube have an opportunity to do something about it.

Artists who performed this year could do good now by publicly  demanding that YouTube take down these offensive videos, stop advertising on the videos and give to charity Google’s share of all revenue generated to date from these videos.  For instance, the revenue from the Final War song below could be donated to The Anti-Defamation League. 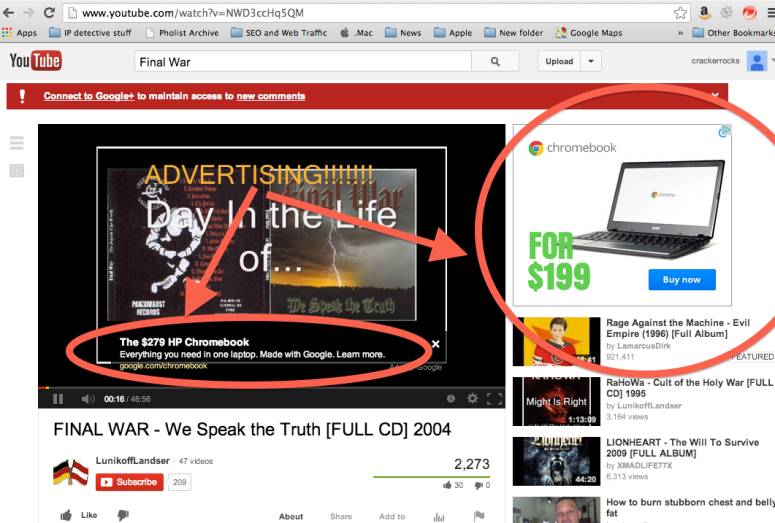 I’m leaving out the screen capture on this one.  But if you search YouTube for “Beheading Mexico”  you will find a snuff film of a man decapitating a woman, (purportedly for infidelity). There is no news or freedom of speech issue here.   There is no editorializing or reporting here.  Just the raw footage.  You also find the chainsaw beheading execution of a man by the a notorious drug cartel. The reason the drug cartel filmed this execution was to intimidate and terrify people. Same with decapitation by various radical jihadi groups.  By hosting and profiting from these videos YouTube is amplifying the terror these groups intended to cause.

In the past when I queried this search on YouTube I came up with sponsored (advertised) videos for “male baldness cures” and other odd products that relate to the head. This leads me to believe there is some sort of keyword specific advertising going on.

Playlists Devoted to Violence Against Women

YouTube has thousands of videos that depict rapes and violence against women.  Some are scenes from movies but others appear to be real footage from security cameras, cellphones and even professional cameras.   Regardless they are often grouped into playlists.  It should also be pointed out that many of the rape videos purport to be of underage girls (see below). I believe these titles are designed to specifically appeal to pedophiles.   If anyone does not believe that these videos have any effect on the young men who watch them just read the comments.   I dare you.

Here’s one such playlist “YouTube Mix – rape camera”   (I’ve catalogued dozens). The first video below “sketch” may seem to have an innocent title but trust me you don’t want to watch it. This playlist also contains a notorious and disturbing real video of a young teenage girl apparently being groped and molested on a school bus.   Note the advertising from Inspirato/American Express, Airborne and Xfinity.   Tweet at American Express.  Tweet at Xfininity. 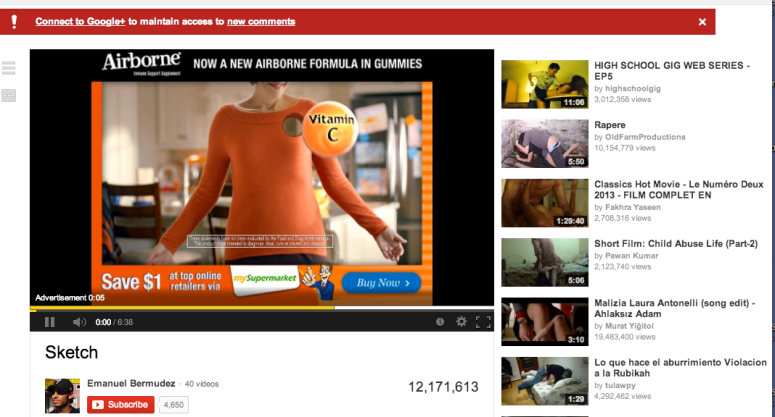 There are hundreds if not thousands of videos by Neo Nazi and  hate bands on YouTube.   Check the ADL list of “Bigots that Rock” and try a YouTube search yourself. Two things quickly become apparent.

1) Many of these videos YouTube has monetized with advertising.

2) The YouTube channels that host these videos appear to be actively recruiting members for various hate groups.  Look at the comments and email addresses displayed in the videos.

In the example below RNskins88 channel appears to be run by a Greek neo nazi group but in comments I’ve highlighted a supporter of the Aryan secessionist group Northwest Front actively recruiting. (BTW 88= Heil Hitler) 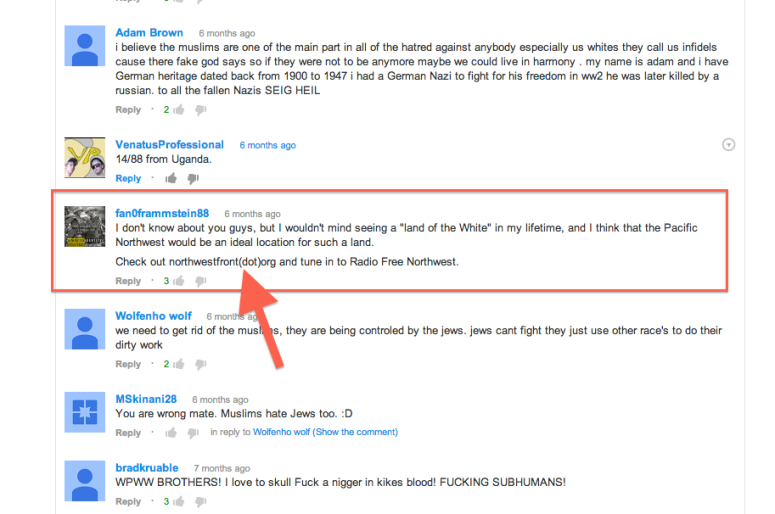 Do it for the kids.

These are just a few of the numerous categories of vile videos you find on YouTube.  It’s really quite startling when you begin to examine what they will host and monetize.  But to me the much bigger problem is that YouTube’s key music demographic are children.

If you have children you know that they don’t listen to Spotify or iTunes radio.  They get their music from YouTube.  They watch TV on YouTube.  They get the vast majority of their entertainment from YouTube.  While YouTube theoretically age restricts videos all the videos above are available even if you are not logged into an account.  Thus they are not age restricted unless you are logged in. I didn’t even get a graphic content warning on several of the most violent videos.   So basically when your kids are on YouTube ALL of this content is there and available to them to watch.

Music videos drive a large percentage, if not a majority of the traffic to YouTube so we artists have a special obligation to ensure that we are not a “gateway drug” for the really disgusting stuff that YouTube hosts.  I humbly ask you to join me and ask YouTube to clean up their act.  Do it for the kids.

If YouTube really wants to be an alternative to television and have the YouTube music awards be a rival to the Grammys they are gonna have to clean up their act.