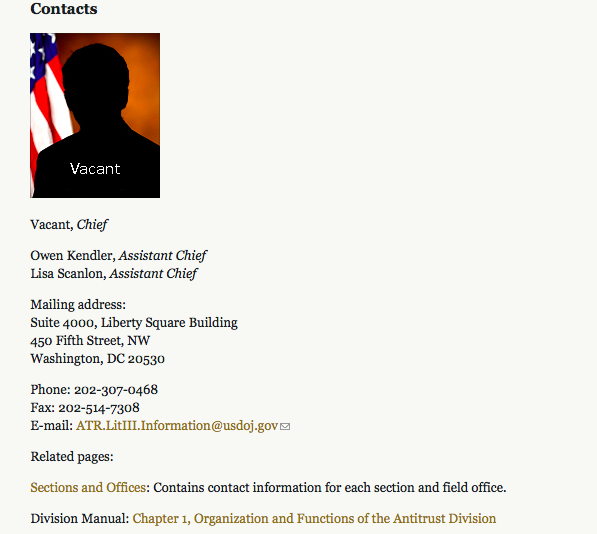 Who IS running the shop over at DOJ Antitrust Litigation Section III? Really doesn’t it just makes a lot more sense for Google to directly pay/control the section rather than having to go through all the rigamarole of pretending to have an impartial and independent division, with revolving door Google lawyers?

You got to wonder.

Why is it that for the previous 75 years of DOJ antitrust supervision BMI/ASCAP were allowed to fractionally license music?    Surely it didn’t escape notice that BMI/ASCAP were fractionally licensing songs?   Fo 75 years they allowed ASCAP BMI songwriters to write co-administration agreements that require fractional licensing.   I mean if the DOJ consent decree judge can issue a legal opinion that notes publisher Marty Bandier in a certain photo was wearing “short sleeves and smoking a large cigar” (clearly the judge intended this as a personal smear)  surely the DOJ and rate court judges should have noticed the fact that for 75 fucking years songwriters have been writing private co-administration contracts that require fractional licensing and BMI and ASCAP have been obliging.  Clear

So is the current crop of Berkeley/Harvard/Stanford/Silicon Valley DOJ antitrust lawyers just smarter than the previous 75 years of lawyers that were employed in the DOJ ATR Division?

Alternately are they more stupid?   Like dangerously stupid.  Like take their law licenses away because they don’t even understand fundamental things  like the constitution, separation of powers and private contracts.  Maybe I should be kinder. Perhaps the entire department suffers from a mass learning disability that makes it so they have a hard time understanding the Copyright Office report on the effect of 100% licensing on the existing music market. That the economic and structure of millions of private contracts concerning the administration of songs, would require pulling hundred of thousand if not millions of songs from BMI and ASCAP producing the exact opposite effect of what they intended with 100% licensing.

Or are they simply corrupt.  Occam’s Razor would suggest so.  It requires fewest assumptions to be added!  I’m only half joking here. Consider the facts. It does seem to only benefit Google.  This head of the Antitrust division is a former Google lawyer (Renata Hesse) and she appears to have pushed through the 100% licensing rule. And as Music Tech Policy notes in their devastating timeline of events, Google seems to have orchestrated a takeover of Antitrust division by Google friendly lawyers following the FTC investigation of Google.

So readers what do you think?