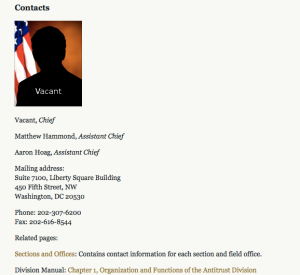 There is a tendency in the waning months of a two term presidency for political allies to cash in their favors; push through favorable rules and regulations; and set the clock ticking on those high paying private sector revolving door jobs.   So we can’t help noting two curious vacancies in the upper reaches of the US DOJ Antitrust Division. The Chief of Litigation Section III and Networks and Technology sections.

Litigation Section III oversees the entertainment business and in particular songwriters’ performing rights organization.  On August 4th this division released a controversial and devastating new rule which requires a single ASCAP or BMI co-writer to license and account on behalf of the other songwriters.  This caused widespread outrage among songwriters and legal scholars who noted the disruption to the music licensing marketplace, international treaty violations  and potential constitutional violations of the rights of songwriters.   Up until a week ago David Kully was chief of this section.  His position is now listed as vacant.   We find this very curious.   Especially as we are told Kully indicated in a communications to songwriters that he didn’t actually write the rule and refused to disclose who wrote the rule.

Meanwhile we notice that the Chief of Networks and Technology section is now also vacant.

Both of these sections have oversight over Google’s businesses.  Does anyone else find it suspicious that these two sections are vacant and are now directly controlled by a former Google lawyer (and Obama administration ethics rule violator and resume fudger) Acting Assistant Attorney General Renata Hesse?

Now the questions are:

Are these business as usual departures?   Or is something more sinister afoot?   Is Kully the fall guy for Google hatchet woman Renata Hesse?  Or is he off too Googleyer – oops I mean greener pastures?

After songwriters recent experience with DOJ ATR Litigation Section III Congress and/or the OIG should look into what is going on here.  Even if nothing improper is found, it should be done to restore public faith in the department.