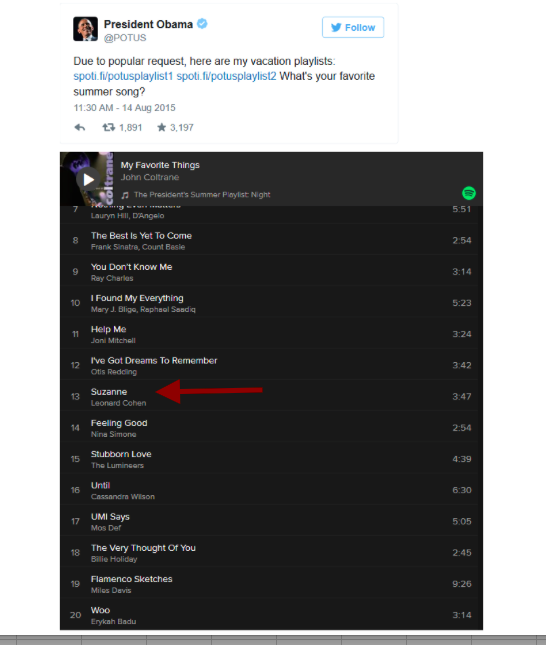 Obama like many political leaders has relied upon songwriters to shape his public persona and image.  But Obama has also allowed his antitrust division to relentlessly persecute songwriters in ways that benefit Silicon Valley firms that are among his largest campaign donors.

Politicians, especially democratic politicians have always appealed to songwriters and performers for help campaigning and in shaping their images.  But once the election is over we never see anything in return. Not even a “thank you.”  But our long running abusive relationship with politicians seems to have hit a new low. It appears the Obama DOJ purposely waited until after all those celebrity/songwriter/performer campaign rallies were finished before they renewed their “100% licensing” legal crusade against songwriter non-profits BMI and ASCAP.

And I do mean “purposely waited.”  Let me explain.

In late July the DOJ ordered songwriter organizations to offer “full work licensing” even on works that they didn’t completely control.  The DOJ claimed that 70 year old antitrust consent decrees required this of songwriters.  However this goes against standard co-writing convention and private contracts that often stipulate each songwriter license his/her share of a work.  For 70 yeas the DOJ never once objected to this practice by songwriters.  Why now?  It was only after the Google backed MIC-Coalition (an astroturf lobbying group that represents… well… Google) wrote and asked DOJ Assistant Attorney General Renata Hesse (herself a former Google lawyer) to require full work licensing of songwriters.  Hesse agreed and tried to force the change on songwriters performing rights organization.

BMI a non-profit that licenses and collects performing rights royalties for songwriters asked a federal judge to block the DOJ from enforcing this new rule.   On September 16 2016 Judge Stanton blocked the new rule.  Blocked is perhaps too soft,  maybe better: it was a complete and devastating smackdown for the DOJ.  Judge Stanton barely spent half a day on the matter.   In no uncertain terms the Judge told the DOJ the consent decrees said nothing about 100% licensing and to knock it off.

Although the DOJ indicated they might appeal, they went quiet.  The election heated up.  Obama hit the campaign trail for Clinton and other democratic candidates.  Performers and songwriters as they usually do, made many appearances on behalf of  (mostly) democratic candidates.  Wednesday morning we awoke to President-Elect Trump and by Friday the Obama DOJ was back to suing songwriters.

But here’s the kicker: the DOJ  filed a one sentence note to the court of appeals,  appealing Judge Stanton’s ruling.  ONE FUCKING SENTENCE! Are you telling me it took 8 weeks to write a one sentence notice?  No, of course not.  They could have filed this notice back in September.  Songwriters, face it, we got used.  We got rope-a-doped.  We got played like suckers.  Like we always do.

I’d love to see the emails between AG Lynch, Renata Hesse and the other lawyers in the Antitrust Division of the DOJ.  I believe this was a pure political calculation with the election in mind.

If you want to FOIA the DOJ  Antitrust Division you can do that here:

4 thoughts on “Electioneering Over, Songwriters No Longer Needed, Obama DOJ Gets Back to Suing Songwriters for Google”