Bono, you know the singer in U2.  Also a venture capitalist.

Anyway this is a joke that has been floating around the music business since probably the early 1990s.   There are a dozens of versions of it.  I have no idea who originally came up with the joke. But here’s the version told to me by the late Don Smith:

An old 60’s hippy bass player is performing his usual Sunday afternoon gig at the local hippy coffee house outside of Santa Rosa in Mendocino County.  They are right in the middle of “Going Up Country”  in the style of Canned Heat when he collapses from a heart attack and dies.  The bass player having lived a good life wakes up at Heaven’s gate and is greeted by St. Peter.  As St. Peter is giving him a sort of orientation walk around, the bass player notices that there is a band playing somewhere.  The bass player interrupts St Peter and asks “is that a live band playing.”   St. Peter says “I was about to get to that”  St Peter motions the bass player to follow him. He leads him down a narrow gap between two clouds into what is apparently Heaven’s night club.   On stage he sees Jimmy Hendrix plugging in his guitar and Keith Moon tuning up a drumset.  St. Peter motions the bass player towards the bass rig.  The bass player can hardly believe his eyes. He gets onstage picks up what appears to be his 1972 P-bass and plugs it into his mint condition Acoustic 360A with a reverse 18″ cab.   Hendrix launches into Purple Haze and the bass player, now ecstatic, joins in.  After a few more songs George Harrison comes up on stage and they play “My Sweet Lord” and “While My Guitar Gently Weeps.”  Janis Joplin jumps up and for a final song  they all break into a blistering rendition of “Piece of my Heart.”  The band is about to leave, when Bono suddenly rushes up on stage  Even though the musicians were all clearly about to take a break he cajoles everyone into staying.  Bono and the band proceed to limp their way through “Beautiful Day” and “Vertigo,”  Hendrix and Moon seem to have never even heard the songs and the whole thing ends with an embarassing smattering of polite applause.   The bass player while casing his bass and putting his cords away notices St. Peter standing next to him.  “What did you think?” St. Peter asks.  The bass player says “It was great…but”  pauses and after looking carefully around turns back to St Peter,  “What’s up with Bono?  I didn’t even know he was dead?”  St. Peter laughs and says “That’s not Bono!  That’s God.  He just thinks he’s Bono.” 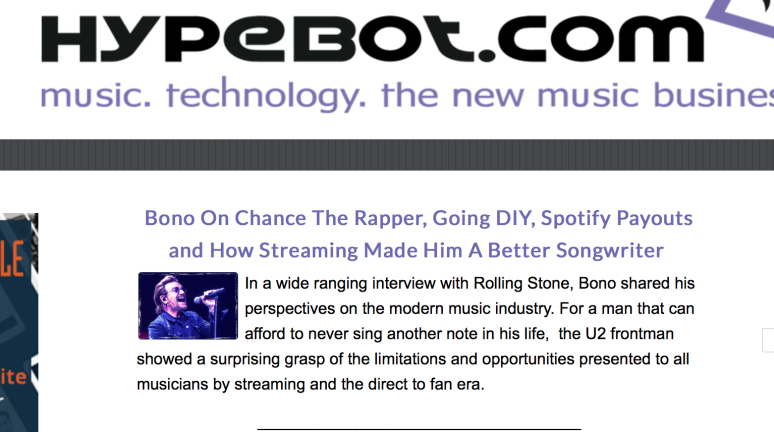