Ever heard the expression, “you’re making my argument?”

You may have seen the book reviews of “Spotify Untold” (or in Swedish “Spotify Inifrån”). The book is currently only available in Swedish and has not been released in the US, but in a new marketing twist the authors are on a book tour in the US promoting their book in Swedish to an English language audience.  Must be nice.

The writers not only seemed to have missed the streaming gentrification part, which is of great consequence to artists, songwriters, and especially MP/TV composers–but those groups are pretty clearly not the authors’ audience.  They are also peddling a ghoulish yarn about Steve Jobs that gives far more insight into Daniel Ek’s midnight of the soul than anything else.  A simple fact check should have made one inquire further in my view.

If their interview with Variety is any indicator, the story line of “Spotify Untold” revolves around (1) music is a commodity (with no discussion of Spotify’s role in the commoditization of what is now openly called “streaming friendly music” not unlike “radio friendly” music–both equally loathed by artists whose name does not begin with “Justin”; and (2) Daniel Ek is a heroic genius (despite the resemblance to Damian in his teen pictures they are also handing out–he thankfully shaves his head).

But most importantly (3) Ek was pursued by Steve Jobs, the evil giant whose company he just happens to have filed a competition complaint against who was aided by the equally evil Sony and Universal as they were all in on it to keep our hero from entering the fabled land of Wall Street.  Yes, a yarn straight out of Norse mythology as retold by Freud; perhaps a little too much so.

But the book may also be a corporatized version of Joseph Campbell’s hero’s journey from The Hero With A Thousand Faces aka Star Wars).  You can plug Daniel Ek into the hero’s role pretty easily: 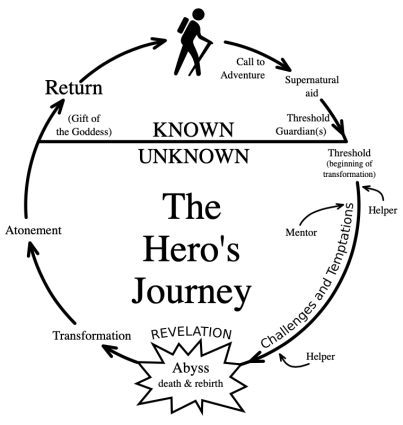 As reported in Variety:

Barely a page into the book “Spotify Untold,” Swedish authors Jonas Leijonhufvud…and Sven Carlsson paint an odd scene. The year is 2010 and Spotify co-founder and CEO Daniel Ek [the hero] is facing a succession of obstacles [the Threshold Guardians] gaining entry into the U.S. market [the region of supernatural wonder] — or, more specifically, infiltrating the tightly-networked and often nepotistic to a fault music industry. [Unwelcoming of the stranger from Asgard, so unlike Silicon Valley.]  As stress sets in [Challenges and Temptations], Ek becomes convinced that Apple’s Steve Jobs is calling his phone just to breathe deeply on the other end of the line, he purportedly confesses to a colleague[a Helper].

There’s a saying, “don’t speak ill of the dead.”  That’s probably a bit superstitious for the authors, but is good advice.  It’s unbecoming and Spotify should denounce it, although it’s highly unlikely that they will given their fatal attraction to PR disasters.

There’s also a saying, “don’t mock the afflicted,” so before you laugh hysterically at the story, realize that Steve Jobs caring enough about Daniel Ek to do such a thing (which assumes Steve knew Daniel Ek existed) was something that was very important to Daniel Ek.  Or in a word–is Daniel Ek more Loki than Thor?

What is really objectively and factually odd about the authors’ 2010 Steve Jobs story about heavy breathing phone calls is that Steve got a liver transplant in 2009 and was very, very sick throughout 2010–the year they say these calls occurred.

Steve left Apple for good in August 2011 and passed in October 2011. It is implausible to me that he was even paying attention to Daniel Ek in 2010, assuming that Steve even knew or cared who Daniel Ek was. Aside from the fact that at that time Spotify was small potatoes, Steve had many more important things on his mind like staying alive. Plus, in my experience if Steve was going to leave you a testy voicemail or phone call, you knew exactly who it was. Exactly.

I for one think that the entire anecdote simply does not scan and is unsubstantiated by the authors’ own admission. Bizarre. Freudian. Not to mention a crass and thoughtless smear against a man who really did change the world. Who can’t defend himself because he is dead.

Variety reports that the authors were not able to confirm this rather insulting and perverse allegation.  But don’t let that stop anyone from publishing gossip.

What Variety does report is this statement from the authors:

To us, Ek’s claim is as a reflection of how paranoid and anxious he must have felt in 2010, when Spotify was being denied access to the U.S. market, in large part due to pressure from Apple. The major record companies seem to have been quite loyal to the iTunes Music Store, and to Jobs personally….Because Spotify was hindered by Steve Jobs [it’s called competition], it forced the company to sweeten its deals with the record companies [also called competition]….Spotify is challenging Apple on a legal level right now.We address Spotify’s constant struggle with Apple in our book. If Ek were to talk about such sensitive topics in book form, [Spotify would] do it in their own way with full control.

The first thing I thought of when reading the story of “Spotify Untold” was that very competition claim that Spotify is pursuing in Europe right now.  That claim appears to have been scripted–Spotify pursued it with the Obama competition authorities a few years ago.  And then of course there was the New York and Connecticut state competition claim that curiously came out the same time as Apple Music launched in the US, apparently manipulated by Spotify’s very own Clintonista lobbying operative who was a political ally of Eric Schneiderman the former (ahem) New York Attorney General.  (Spotify tried to drag Universal into that one, too–so this is a movie script that Spotify pulls down every so often for a polish and sometimes changes the supporting characters.)

While the authors claim that they spoke to many Spotify executives but not Ek, the book still has curious timing–as does the authors’ disclaimer that the book is not connected to Spotify directly, the plausible deniability that is the hallmark of black bag operations.

And if you believe as I do that Daniel Ek actually hates the major labels (read the Spotify DPO filing and you’ll get the idea), it’s only natural that he would try to twist Sony and Universal into the story.  He just didn’t know that his major label negotiation experience was garden variety stuff and not unusual in any way.  They didn’t get stock in iTunes so they damn well would in everything that came after iTunes.  Daniel Ek was not singled out–rather, he opted in.

I would be very curious to know why the authors of “Spotify Inifrån” came away from their research thinking that the major labels were “quite loyal” to iTunes and to Steve Jobs.  While that may have been true of certain executives, the reason that the labels required licensees to sell in Windows Media DRM (i.e., the format nobody wanted) was because they wanted to encourage competition with iTunes.

The labels eventually ended that failed policy after Steve called them out and suggested that they drop the DRM part (about which I strongly agreed in one of the first posts on MusicTechPolicy in 2006).  Even after the labels dropped that failed idea, record companies large and small did not want a single digital retailer dominating the online market.  So the idea that they colluded with Steve Jobs and Apple to make life difficult for a poor little hacker boy from Sweden is so inconsistent with reality to be laughable.

In fact, one could argue that were it not for Steve asking for more competition with iTunes Music Store (and in fairness, sell more iPods and later iPhones), there may never have been a Spotify at all.  What that does not include is the accelerating failing belief in one of Spotify’s major selling point–the free service converts users from piracy to a paid service.  That didn’t happen at anything like the rates that Spotify sold,  nobody believes it anymore and it was unbelievable in the first place. But exactly what you’d expect a hacker to say.

And here’s some other research that got left out:  Spotify’s psychographic data profiling is largely based on the work of Dr. Michael Kosinski, whose work also inspired the techniques of Cambridge Analytica and the Internet Research Agency.  See Kosinski et al, The Song Is You: Preferences for Musical Attribute Dimensions Reflect Personality (2016).  More on this influence another time.

So why would these authors be slinging this unlikely brew?  It’s possible that the book is an answer to “Spotify Teardown,” funded by a grant and published (in English) earlier in 2019 with a much less mythological and much more recognizable approach to a Spotify reality according to an NPR review:

[“Spotify Teardown”] argues that Spotify isn’t a media company per se – and…asserts that it’s structurally much closer to a Facebook or Google, particularly in its digital business model.  Indeed, Spotify was never really so much a music company as an Internet brand. “Spotify’s business model never benefited all musicians in the same manner but rather appeared — and still appears — highly skewed toward major stars and record labels, establishing a winner-takes-all market familiar from the traditional media industries.”

You won’t find that in a corporate bio.  That sounds like the streaming gentrification reality and definitely wasn’t written by anyone named Justin.  So while I don’t know what motivated the “Spotify Inifrån” authors, I do think that there’s a definite whiff of Astroturf in a book that tells a story that fits almost perfectly with the hero’s journey that Spotify would like to be telling competition authorities.  I think the authors are aware of this, hence their disclaimers.

And I’m still waiting for the last leg of Daniel Ek’s hero’s arc, the transformation and atonement.  Which is the part that makes the hero a hero.  As the authors tell us, “[Spotify] would probably rather tell their story themselves than have us do it for them, but I think they understand our role as journalists.”

I just bet they do.

But look–credit where credit’s due.  Ek used the music to make himself rich and he changed the economics of the music industry to keep making himself even richer.  He gets million dollar performance bonuses when he doesn’t meet his performance targets.  There are a growing number of niche and cultural artists who hate him. He’s also changed the way that fans interact with music online through the use of personality traits and data profiling instead of genre or artist based selection.  And he invented “streaming friendly music” to the great joy of elevator operators everywhere.

For all his idiosyncrasies, Steve is largely revered and recognized as someone who really did change the world. Or as Daniel Ek tweeted when Jobs passed in 2011–after supposedly being harassed by Steve:

“Thank you Steve. You were a true inspiration in so many parts of my life, both personal and professional. My hat off to our time’s Da Vinci.”

Exactly.  That Danny is a complex little man.

Remember those Mac/PC ads?  You could just as easily run the same ad campaign for Spotify/Apple Music with only a few tweaks.   And when it comes to marketing, what should be keeping Ek up at night is not devising sick stories he can tell about Steve Jobs but rather very justified fear of what will happen when Apple turns its marketing team loose on Spotify.  He ain’t seen nothing yet.

If you think this is paranoid, watch this video from the distinguished journalist Sharyl Attkisson.  Let’s just say I don’t put anything past these guys.