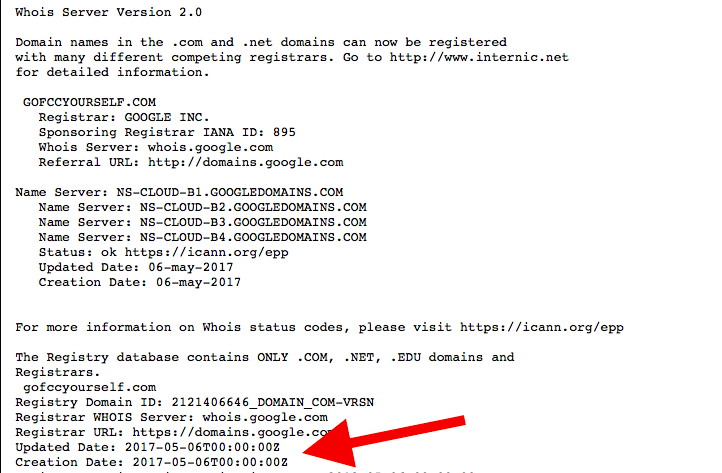 What’s wrong with this picture?

GoFCCYourself.com is the website that John Oliver used to flood the FCC Net Neutrality consultation page  with comments.  Purportedly his action brought  the FCC website down.   Sound familiar?

For instance  the registry for the domain http://www.GoogleDomains.com shows

I find this odd. This website URL thus appears to have been registered differently by Google Domains than any other registration I can find. How and why was this registered differently than other domains? Did Google help John Oliver with this?  Did they automate the timing of the registration?  Is Google involved in yet another assault on the FCC?  Is this payback for the failed “unlock the box”proposal? The enemy of my enemy?

Net Neutrality is a complex issue. Reasonable people disagree on how best to implement it.  But before we move on, let me ask you this.  Given the news coverage…  Is the FCC proposing ending net neutrality?  yes or no?   Quick! don’t think about it!

I bet you said yes.

You would be wrong.

You are purposely being misled by fake progressive astroturf groups.  This is the SOPA playbook.

In actuality the FCC is not proposing ending net neutrality but instead transferring authority over net neutrality back to the FTC, where it lived for many years.  I don’t remember my internet being broken then.  Do you?

But more importantly there are a number of complex reasons why I think that this is not necessarily a bad thing for copyright holders.  The most important reason is that the FCC has extraordinary powers and under the last FCC chairman they demonstrated their intention to essentially force compulsory licenses onto copyright holders.  Haven’t we artists, songwriters especially suffered enough under compulsory licenses?  For you civilians you’ve probably read stories about songwriters getting checks for ridiculously small amounts like  17 cents from a streaming service.  Compulsory licenses and rate setting by the federal government are the cause of that particular outrage.     No thanks, no more compulsories.

Further, you know, it’s possible to be pro-net neutrality and also be against granting the FCC extraordinary power to regulate the internet.  Right?  They are not mutually exclusive.

Now will it be better for artists if we were are not under the FCC? I can’t say for sure.

But what I CAN tell you is that a lot of people who have been on the wrong side of copyright and artists rights issues for a very, very long time are pulling out all the stops trying to keep Net Neutrality under the FCC.  For this reason alone artists and copyright holders need to be very careful here.  These assholes are up to something.

Take for instance our old friends Fight For The Future.  We have written extensively about them.  Best we can tell they are pure astroturf for silicon valley corps. And readers of this column will remember this company well,  These were the folks that “comment bombed”the Copyright office  consultation page on DMCA takedown reform.   They illegally posted 86,000 identical comments to the Copyright Office using an automated tool from a third party website.  Or in layman’s terms they attacked a government website with “a bot.”   We caught them. Nobody in the last administration had the balls to do anything about it.    See our coverage here, here, here and here.   Since that time we learned that this “progressive net rights group is heavily funded by a mysterious cyber libertarian bitcoin promoter named Andrew Lee.   Lee was also somehow  involved in Mt Gox the famous bitcoin exchange that lost hundreds of millions of dollars worth of bitcoin and then collapsed resulting in criminal charges and arrests.    Why is a “progressive” grassroots group taking money from people like this?   What is really going on here?

I doubt this is really about net neutrality and empowering the individual.  I think this is a battle between corporate proxies, and one set of mega corps wants to keep the Net Neutrality under the FCC.  Poor John Oliver and fans. They’ve been duped into being human shields for silicon valley interests.