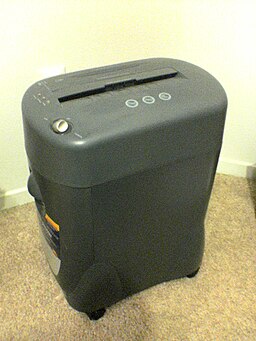 We are definitely not implying that anyone has done anything wrong.  We just really like this picture of a document shredder.

TikTok is a Chinese state-controlled company and one of the largest music platforms in the world. Yet according to multiple sources in the music industry, most of the songs they offer to their users are not licensed. I can personally confirm that TikTok distributes at least 2 dozen of my copyrights for which they have no license.

TikTok has also found itself in a lot of hot water over accusations it illegally harvesting data from its users and is effectively a spying operation for the Chinese government.  The US Army was so concerned about this possibility it recently ordered personnel to delete the app from their smartphones. The secretive Committee For Foreign Investment in the United States (CFIUS) has launched an investigation into the purchase of musical.ly by TikTok’s parent Bytedance and security researchers have exhaustively documented the TikTok app’s intrusive and bizarre behavior.

This is why it’s especially troubling that a number of major label licensing executives are now working for TikTok after negotiating very limited licenses for their old labels. This is not a great look. Artists and songwriters can honestly wonder if their works were sold on the cheap by executives looking for a better paying tech job. To be clear I’m not saying there was commercial bribery, but I wouldn’t be surprised if potential investors, bankers (WMG and UMG are promising IPOs), or even CFIUS ask for communications between former licensing executives and TikTok just to make sure there was no hanky panky.  Remember we are talking about a Chinese state-directed firm engaged in ongoing theft of US intellectual property. Remember anyone can ask for an investigation. I have a feeling this will eventually get someone’s attention…

Sadly for the major labels, this comes after they fought to overcome artist suspicions that labels (and managers) traded lower royalties for Spotify equity.  To counteract these suspicions labels went out of their way to distribute profits from the Spotify IPO to artists on a pro-rata per-stream basis. (Curiously managers did not-Editor.) Will these high profile executive defections to the music industry’s biggest licensing scofflaw undo the goodwill (dearly) purchased with that Spotify IPO distribution? We shall see.