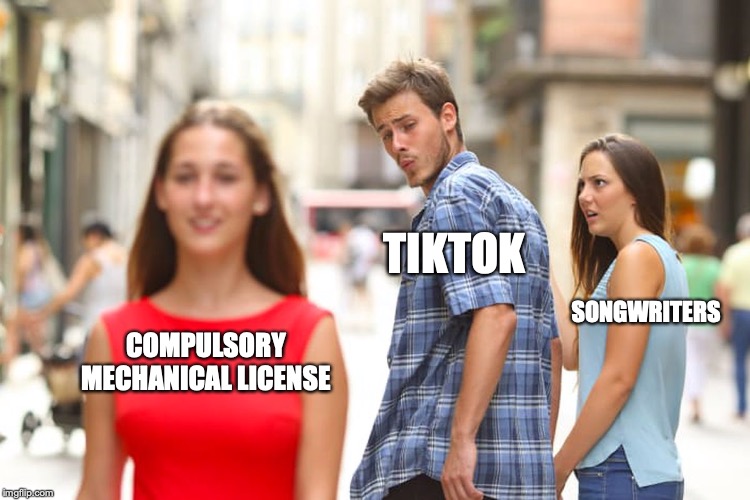 The Financial Times reports that the parent of mass copyright infringer* TikTok plans to launch a streaming service:

The Chinese company behind the popular video app TikTok is set to go head-to-head with the likes of Spotify and Apple in the music streaming market with the launch of its own rival service.

ByteDance is in talks with the world’s largest record companies — Universal Music, Sony Music and Warner Music — for global licensing deals to include their songs on its new music subscription service, according to people familiar with the matter.

Oh really.  So let me get this straight.  Executives at the major music conglomerates have largely sat on their hands while TikTok/Bytedance has engaged in a pattern of willful mass copyright infringement  against songwriters, and now are gonna help TikTok/Bytedance launch a streaming service? Not if I can help it.

Starting in 2021 all streaming services will get a streaming mechanical license through the Copyright Office/MLC.  Regulations that govern the federal compulsory mechanical license already forbid mechanical licenses on unlicensed recordings. This was originally designed to keep old school bootleggers from taking advantage of the federal license. In my opinion, regulations should be updated to prevent mass digital infringers like TikTok from using the compulsory license.  Obviously, the copyright office would have to distinguish between a company that might “incidentally” infringe on a limited number of songs and a company like TikTok that apparently has no licenses at all for compositions, knows this, and refuses to license. But it’s not impossible.

The Copyright Office should be required to conduct a review or at least hold a public hearing before they allow a  company to take advantage of the federal compulsory license. Why? If the federal government is going to take away songwriters individual right to license their work, the feds should make sure they aren’t, in turn, licensing to scofflaws, scammers, and criminals. Seems sensible right? Further, I caution against farming out this process to the MLC as they have already demonstrated they are not keen on transparency or oversight. The revolving door between big publishers that dominate the MLC and digital services invites corruption and cronyism. The Copyright Office should make sure that independent writers are not forced to license to a company ripped them off in the past.

Failing to vet licensees will create an extreme moral hazard for the copyright office.  Licensing willful mass infringers would effectively make the copyright office complicit in money laundering, as a company like TikTok could take dirty money from infringing activities and effectively wash it by creating a licensed service. My hope is the Copyright Office address this matter in the next few weeks.

*There is a false narrative going around the music business that TikTok only infringes because they host User Generated Content. Thus it is protected from claims of infringement by the DMCA safe harbor.  This is absolutely not true.  Spend some time with the app and verify this, but in short, it clearly offers “sounds” to users to use in their videos. These sounds do not come from the users’ devices. They come over the network connection via the TikTok app. (Distribution! exclusive right 3)  Next It makes copies of those sounds on the users’ devices. (Copies! exclusive right 1). Users are not copying and distributing.  TikTok is. Thus like Grooveshark, it does not get the benefit of the DMCA safe harbor. It has now hired some of the smartest music licensing lawyers in the world. Yet  TikTok knowingly and wilfully continues to commit mass copyright infringement. WTF? If I was a lawyer working at TikTok? I would make sure I can pay my mortgage without a law license!