The purpose of a chart is to provide meaningful metrics to determine the relative value of a title in the marketplace. The new Billboard 200 “consumption” chart moves away from the traditional metric of album sales. In doing so, the new chart also creates questions about how meaningful this new information will be to artists, managers and labels. As album sales continue to decrease a method of measurement that addresses today’s environment is absolutely important.

The move from a “Sales Chart” to a “Consumption Chart” acknowledges what we already know…  More music is being consumed than ever before and conversely musicians are being compensated less than ever before, for that consumption.

Track Equivalent Album sales for measuring the volume of individual songs by a single artist has been a helpful and accurate method of comparing unit sales in the ala carte song era of Itunes (and others) in that every 10 song sales equal one album. This is easy to quantify as logically ten songs sold at 99 cents really does equal the revenue of one album at $9.99. So for comparative purposes this makes sense both in terms of the underlying logic and the economic reality.

Maybe Billboard has a sense of humor in that the calculation of streams to song and album equivalent’s are $.00666 per stream?

It get’s worse because we know from our Streaming Price Bible that neither Spotify or YouTube are paying anywhere near those rates on an summed, averaged per stream rate. From what we’ve heard Billboard is excluding plays from YouTube (for now) but we have a feeling streaming from YouTube Music Key will be included just as those are from Google Play.

The problem here is that the free tiers dilute how meaningful this data is actually going to be to everyone. As we pointed out in one data set we reviewed Spotify’s free streams accounted for 58% of total plays, but only 16% of revenue in the USA. On YouTube (by any name) the amount of streams to revenue is likely to be far more extreme.

What’s worse is that we can clearly see that over time, as fixed revenue streaming services scale the per stream rate will drop. The bigger the services scale, the less each stream is worth. This is unless of course the labels demand a minimum per stream rate that actually matches the metric the chart is suggesting ($.00666 – retail) and no streams from free tiers should be included.

Suddenly, we’re not feeling so lonely on this point, see here:

Add one more name to the list of industry figureheads who’ve sided with Taylor Swift in her battle with Spotify: Marc Geiger, William Morris Endeavor’s head of music, who called the ubiquity of free, ad-supported streaming music services “a f—ed-up, torturous thing for 15 years”

Essay: Why Streaming (Done Right) Will Save the Music Business | Billboard

As the first music-streaming service to be licensed by all major labels — and the No. 2 on-demand music service in the United States — it may surprise you to learn that we at Rhapsody support, and generally agree with, the decision by Taylor Swift and other artists to not make their new albums available on free streaming services immediately after release.

If we can all agree that Free Streams are problematic for the business, why can’t we agree that free streams are bad for a chart? 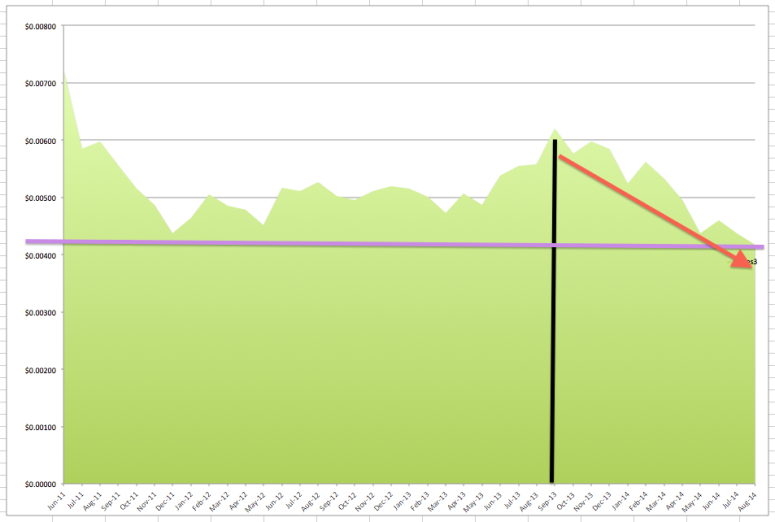 Combining the free and paid steams defeats the purpose of what the chart is attempting to achieve, a meaningful metric of paid consumer demand.

Free streams must be filtered out of the chart for it to be meaningful.

Giving away a million of something to gain chart positoning is not new and has been controversial. Lady Gaga’s “Art Pop” album benefited from a 99 cent sale at Amazon.com. However albums given away for free by Jay-Z (in partnership with Samsung) and U2 (in partnership with Apple) have not qualified for charting. There is a reason why.

Add to this YouTube views are known to be gamed regularly with many services offering “pay for plays”. We’re also seeing a growth market for services that provide “pay for plays” on Spotify as well. We recognize that in the early days of Soundscan there were attempts to game that system as well by buying off heavily weighted indie stores with free goods, cash or both.

In a digital world where more consumers are streaming on free tiers than paying subscriptions, where the price per stream is falling as services scale, and where there is no fixed price point as a baseline one has to wonder what the true value of the new chart will really be? If it is to illustrate just how wide the gap is between consumption and revenue, then that may be it’s only real purpose.

It’s not like any of this is new, or news. Big Champange, Music Metric and others have been tracking not only sales data but social media metrics for engagement, free streams (youtube and soundcloud) and even p2p filesharing data for years. If we’re going to get honest about “consumption” charts The Pirate Bay has a Top 100 why not include those rankings? To be clear, this is sarcasm, not an actual suggestion. It also illustrates the grossly mislead notion of including free streams in the new chart. It’s not that hard to determine how we are not making money…

Why Spotify is not Netflix (But Maybe It Should Be)

How to Fix Music Streaming in One Word, “Windows”… two more “Pay Gates”…