We knew there were two price tiers (Free & Paid) but we didn’t anticipate discovering the other five tiers, even as limited as they are. 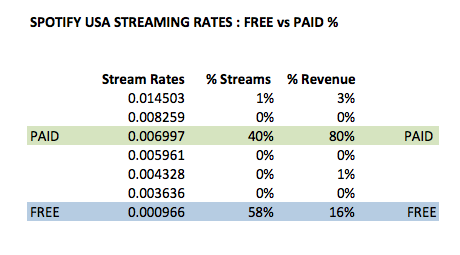 As we had suspected, the majority of consumption is generating the least amount of revenue.

Oh, and for those of you keeping score at home the net summed per stream rate, for all streams divided by all revenue is .00352 in the aggregate. That’s .00169 per stream LESS than reported earlier this year in the Streaming Price Bible of .00521. Just another indication that as streaming models mature the price per stream will continue to drop. Add to this that even Spotify executives have admitted as much.

If you have data that looks different than ours, send it our way and let us crunch it. This is the problem when there is such a profound lack of openess and transparency. There also appears to be an overall lack of consistency. Let’s have some real “disruptive innovation” by “sharing” our Spotify statements and comparing the numbers.

[The per play rates noted above are aggregated. In all cases the total amount of revenue is divided by the total number of the streams per service  (ex: $5,210 / 1,000,000 = .00521 per stream). Multiple tiers and pricing structures are all summed together and divided to create an averaged, single rate per play.]

4 thoughts on “USA Spotify Streaming Rates Reveal 58% of Streams Are Free, Pays Only 16% Of Revenue”