Perhaps that’s a tad bit hyperbolic.  I mean it’s probably unfair to compare Google to meth-heads and low grade strippers.   Clearly Google and its DC proxies are much more dishonest and dangerous!

Let’s  do a quick round up of all the Obama Administration lame duck favors being called in by Google.  And remember this is just copyright and it’s still just the pre-lame duck session.  The election hasn’t even happened.  It’s gonna be insane after the election.  Taxpayers will be lucky if there’s any office furniture left in federal offices by the time inauguration day rolls around.

We have covered this extensively. Read the links at the end of this section if you need to catch up.  But this is a rule that only makes sense if you understand that it benefits Google/YouTube in the purported $1,000,000,000 dispute with Pharrell.  The rule in every other respect makes no sense.  The rule itself reduces competition;  it will entrench dominant market players on both sides (licensee and licensor); it reduces licensing efficiency;  it violates the constitutional rights of songwriters; it violates the DOJ ATR Division own rules; flies in the face of the previous 75 years of antitrust regulation of songwriter organizations;  and it benefits a single company.  Fucked up.

The rule was apparently pushed through by former Google attorney Renata Hesse who is now an Assistant Attorney General in charge of the Antitrust Division.  This is particularly rich because when Renata Hesse worked for Google she argued and lobbied against the antitrust regulation of the  search advertising  monopoly. The fox is in the henhouse.  And this fox has just overseen one of the most regressive pro-monopoly applications of antitrust law against individuals (chickens) since the 1890s when the antitrust laws were routinely used against labor unions and in favor of the trusts (foxes) they were supposed to limit.

But here is how you really know that the rule is  corruption at work.   The DOJ ATR very carefully phrased the 100% licensing rule as a “clarification” of the original consent decree rules.  In other words it isn’t a new rule.

Why is this important?
Because it is a transparent attempt to get around the constitution, which explicitly forbids ex post facto law.  That is, “A law that retroactively changes the legal consequences (or status) of actions that were committed, or relationships that existed, before the enactment of the law.”  Essentially Renata Hesse loads the entire US antitrust enforcement apparatus into a time machine and goes back to 1941 and “clarifies” the existing rule. Thus making those legal agreements between songwriters, co-writers and  performing rights societies illegal before they were signed!

Hey, that makes a great album title.  Or title of a memoir.  Preferably one written from a federal prison.

Complexity is theft and the sure sign of a scam.   No honest person does something this complicated to fix a simple problem.  Surely we are all being scammed here.

So how is this not an unconstitutional “taking” from songwriters that solely benefits Ms Hesse’s former client Google?  This takes any co-administration agreements that Pharrell may have with cowriters and makes them illegal.  Further the new rule forces his co-writers who are members of ASCAP and BMI (already under DOJ consent decrees) to license his song without his consent.  It thus deprives thousands of songwriters like Pharrell of the valuable right to cut their own deal with Google/YouTube.

Maybe in a few years when songwriters begin to notice that their ASCAP and BMI checks are reduced by the extra administrative deductions required by the 100% licensing rule, remember this: a single apparently corrupt (didn’t recuse, ethics violations)  government employee Renata Hesse took money out of your pocket.  I’m looking forward to some clever songwriter with a clever lawyer finding a way to hold her personally responsible for the loss of income to all songwriters.  This is not as unlikely as you think because federal officials that violate constitutional rights of individuals are not always immune from personal liability.

Let’s see what happens when the FOIAs start rolling in.

Google, the FCC and the So-called “Unlock the Box” 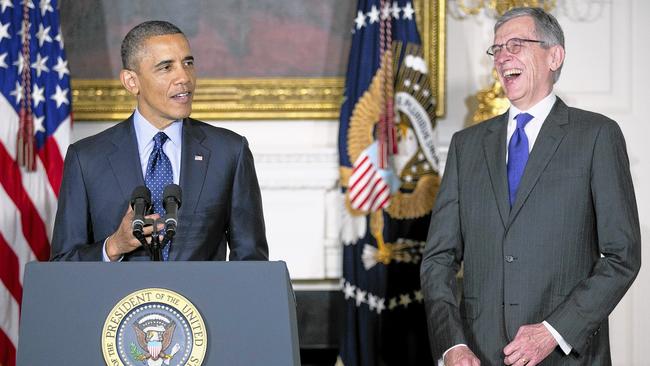 Honestly this is mostly above my pay grade, but I know enough to say the Google shadow government in Washington DC is doing something that is bad for copyright owners while helping Google cash in.

“Unlock the set top box.”  That sounds good.  Right? How could this be bad?  Well,  it is definitely being pushed by Google and their well funded proxy Public Knowledge.  And it’s also THE classic Google ploy: Take a position that seemingly has some small benefit to the public or consumers (functional cable boxes you can purchase not rent) and then load up the regulation like a trojan horse with all kinds of goodies for Google.

In this case all you need to know is this: the “unlock the box” rule requires the FCC to institute some sort of panel or process to “oversee and adjudicate copyright licensing issues.”  I’m not an expert but I don’t understand how congress has given the FCC any right to regulate private copyright licensing agreements?  Did congress act? No. So once again this  sounds more like some sort of extralegal compulsory licensing scheme that would benefit Google and once again give the monopoly access to content they have not licensed.

Indeed as Precursor blog notes the copyright office weighed in on the proposal:

“The Copyright Office is therefore hopeful that the FCC will refine its approach as necessary to avoid conflicts with copyright law and authors interests under that law. As a threshold matter, it seems critical that any revised proposal respect the authority of creators to manage the exploitation of their copyrighted works through private licensing arrangements, because regulatory actions that undermine such arrangements would be inconsistent with the rights granted under the Copyright Act, and to some degree, as discussed below, the authority of Congress to decide whether and when limitations on these rights should apply.”

Doesn’t this seem like the same playbook that Google used over at the DOJ Antitrust Division?  A novel and likely unconstitutional reinterpretation of the rules to get what they want? This is Google running wild as the clock runs out on the Obama administration.

Why do I say that? This proposal by all accounts is being pushed by Gigi Sohn who is senior counsel to the Chairman of the FCC Tom Wheeler.  Gigi Sohn of course was the founder of Public Knowledge.  And Public Knowledge is funded by Google.  In the Oracle v Google case the Judge forced Google to produce a Shill list.  Guess who was on it? Public Knowledge.   Does Gigi Sohn play the same role at the FCC that Renata Hesse plays at DOJ ATR? Looks like it.

“I’m a little surprised that Public Knowledge would actually ask me to come here today since I stole Gigi Sohn,” Wheeler said as the keynote speaker at a Public Knowledge awards dinner in September.

“We cannot have debate, we cannot have the essence of how [James] Madison said this government would work without organizations like Public Knowledge,” he continued. “There is plenty of ambition on the other side of issues. There is plenty of ability to speak out. Plenty of voices, which many times are presented as ‘independent,’ but aren’t. But the ability of Public Knowledge, Free Press, Common Cause — that ability keeps the process on the straight and narrow. So I’m here to salute you for the job you do in making sure that ambition is countered with other ambition representing people.”

Either Wheeler is totally in the tank for Google or he is an idiot who doesn’t realize that Google funds and calls the shots at Public Knowledge.  There is no “independent” public voice that is represented here.  Free press ain’t  the public either.  It’s just Google’s BFF Soros.  See Soros hack.

I wonder which large technology company Wheeler works for after his term?

(Also Madison is rolling in his fucking grave: “[government] interference is but the first link of a long chain of repetitions, every subsequent interference being naturally produced by the effects of the preceding.” Have you ever read Madison you dumbass?)

Did the FCC’s Gigi Sohn phone home to Public Knowledge/Google and ask them to attack the Copyright Office? Sure looks like it. (AP photo Harry Hamburg).

But none of the preceding compares to this.  This is where it gets nasty.  There is no way around this but it really looks like Gigi Sohn a government official that happens to be chief counselor to FCC Chairman Tom Wheeler has enlisted Public Knowledge, an organization she founded, to personally attack the Register of Copyrights.  Simply because the Copyright Office did its job and  weighed in on the FCC proposed unlock the box rule.

In a report breathlessly titled ©APTURED: Systemic Bias at the U.S. Copyright Office,  Public knowledge goes after the Copyright Office, accusing them of being captured by the copyright industries.  They personally single out the sitting Register of Copyrights as being “captured.”  Their evidence? She worked for the Authors Guild.   I am shocked!  A copyright expert once worked as counsel for an organization that needed expertise in copyright law?!!! Heavens to Betsy!!

Notice that these dishonest astroturfers don’t mention that the Register of Copyrights also worked for The Guggenheim. That would be inconvenient because often the Guggenheim is on the exception side of Copyright law.  No, that wouldn’t fit their shitty little narrative.

Guess what else didn’t fit their shitty little narrative?  William Patry chief copyright counsel for Google once worked at the Copyright Office.  In a section of the report titled “Copyright Office to Industry”  they  list 7 people in 22 years that went from the copyright office to “the copyright industry.”  This is supposed to show some sort of revolving door between the Copyright office and such high paying jobs like working in public policy office for the financially decimated photography industry.  (That is not a payday if you don’t get the joke.)

Yet these folks they leave William Patry off the list…

How the fuck do you omit that?  This is pure dishonesty.  Further, are we really supposed to believe that Gigi Sohn and others at the FCC are not somehow in on this dishonest attack by Public Knowledge?   C’mon.  You know this is all FOIA-able?

This made me so mad I decided to look up “piece of shit” at Urban Dictionary. I’ve heard the phrase before and I wanted to see if perhaps it applied in this situation.

What do you think? If you go out of your way to cherry pick data to make the Register of Copyright and the Copyright Office look corrupt are you a person or organization that is in the business of not sucking?

If you are a high ranking governement official, say, like Gigi Sohn who is senior counsel to the Chairman of the FCC  and you just maybe get the organization you founded to mount a dishonest personal attack on another federal official are you “working correctly?”

If you are the FCC chief and you have people working for you that seem to be working in coordination with Google proxies and you don’t fire them are you “working correctly?” Public Knowledge doesn’t even bother to disguise the reason for their attack. They are doing this right under the chairman’s nose.  How does Wheeler not know?

So what do you think?

The MTP Podcast: The Consequences of DOJ’s New Rule on 100% Licensing with David Lowery, Steve Winogradsky and Chris Castle

Curious Departures from DOJ Antitrust: Off to the GOOLAG?